Here is a look at a Hasbro Press Kit which was sent out to media in 2004 for the Original Trilogy Collection. The beautifully vintage-inspired design houses a Stormtrooper action figure on one side, and when unfolded, reveals the official press release for the Original Trilogy Collection toy line on the other. In addition to the press release Hasbro also included a brief history of the Star Wars action figure toy line from 1977 - 2004.

The word RARE is over-used when it comes to Star Wars action figures, but in this case, this set is truly rare. Here is more information from toy expert Bob Friedland, who at the time worked at marketing firm Bratskeir & Company, which was responsible for mailing the kits out: 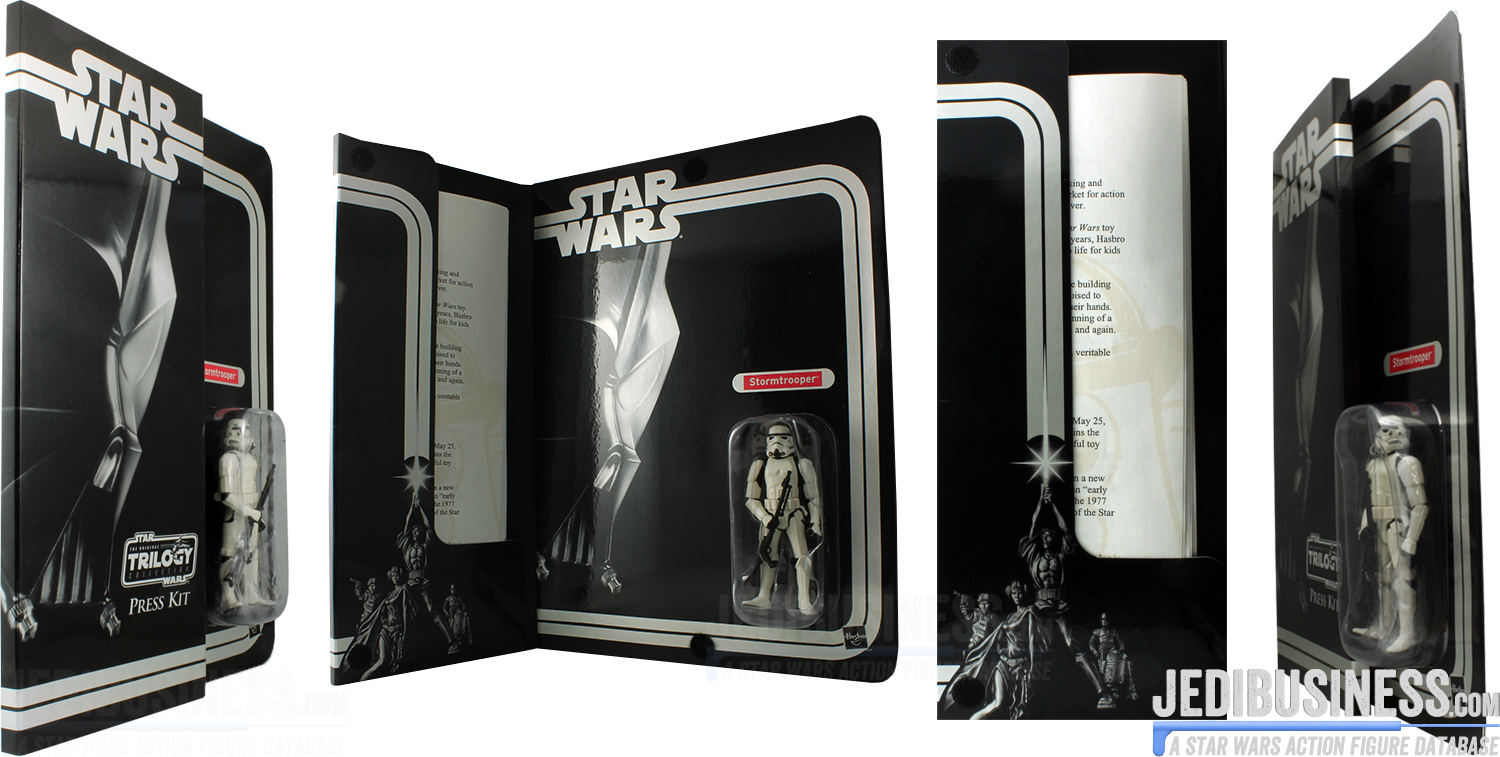 Ever since the classic Star Wars trilogy burst onto the screen in 1977, a new generation of movie and toy fans has continued to the tradition of celebrating the past, present and future of the Star Wars universe. In 2004, Hasbro builds on the tradition with the Original Trilogy Collection of authentically detailed figures, vehicles and lightsabers, this time celebrating Lucasfilm's fall release of the Star Wars Trilogy on DVD.

Hasbro's Original Trilogy Collection will recapture the magic of the first three Star Wars film releases from the late 70s and early 80s for a new generation of kids, bringing back the memorable black-and-silver retro package look and collectible new versions of the earliest Star Wars toys. In addition to updated action figure versions of the most favorite characters from the first three films, Hasbro is bringing back one of the most legendary spaceships in the galaxy -- available for the first time since 1996 -- the Millennium Falcon.

Hasbro Star Wars lightsabers defined the role-play category and remain among the best-selling Star Wars items. The crash-and-bash fun continues with basic and electronic lightsabers based on the Star Wars Trilogy.

"With Hasbro's new Original Trilogy Collection, we've recreated the look and feel of the original product line, recapturing the magic for collectors and giving kids an exciting first-time experience,"said Eric Nyman, Star Wars Marketing Director for Hasbro. "The rich heritage and gripping story lines of the original Star Wars trilogy have been fascinating fans for more than 25 years and have given rise to one of the most enduring toy lines ever."

Following is Hasbro's line-up of Original Trilogy Collection products, available in August at retailers everywhere. All are recommended for ages 4+, unless otherwise noted):

(Approximate retail price: $59.99) Make the jump into hyperspace with the coolest starship of all time! The Millennium Falcon has flown in the biggest battles and most exciting adventures the galaxy has ever known. Take control of this legendary ship to combat DARTH VADER'S TIE FIGHTER, help defeat the Empire and fight alongside the heroes of the Rebellion. Available for the first time since 1996, the Millennium Falcon has been upgraded with new light-up tail lights that change color based on the flying mode, new hyperdrive sounds and lights, and authentic engine start-up and cruise sounds! It also featues a new front missile, turbo "laser" cannon sounds and lights, working headlights for the toughest space battles, and it fits lots of figures.

(Approximate Retail Price: $4.99) The foucs of the basic figure collection will be the favorite characters from the Star Wars Trilogy DVD collection, including R2-D2, Han Solo, Darth Vader, Chewbacca, Princess Leia and three versions of Luke Skywalker, among others. The line will feature the memorable black-and-silver retro package look just like some of the earliest Star Wars toys.

(Approximate retail price: $19.99 each) The Star Wars fantasy would not be complete without high-flying vehicles. Two classic vehicles from the trilogy, the X-WING FIGHTER and TIE FIGHTER, will be available.

(Approximate retail price: $19.99) The Force is strong with authentic ELECTRONIC LIGHTASBERS of key Star Wars heroes and villains. Featuring handle designs based on the lightsabers of LUKE SKYWALKER and DARTH VADER, each lightsaber has a light-up extendable blade and authentic movie sounds for all the classic crash-and-bash action and allows kids to play out their own Star Wars fantasies.

Hasbro (NYSE:HAS) is a worldwide leader in children's and family leisure time entertainment products and services, including the design, manufacture and marketing of games and toys ranging from traditional to high-tech. Both internationally and in the U.S., its PLAYSKOOL, TONKA, MILTON BRADLEY, PARKER BROTHERS, TIGER, and WIZARDS OF THE COAST brands and products provide the highest quality and most recognizable play experiences in the world.

The 1977 record-breaking movie Star Wars not only revolutionized filmmaking and began an everlasting cultural phenomenon, but also completely transformed the market for action figures. Toys based on the Star Wars saga would become one of the biggest toy lines ever.

Hasbro, Inc. (NYSE:HAS), and its Kenner brand, have been a part of the Star Wars toy story through over 25 years and five films with the sixth due out in 2005. Over the years, Hasbro has worked closely with Lucasfilm to bring the Star Wars excitement and fantasy to life for kids and fans everywhere.

With the upcoming release of the original Star Wars Trilogy on DVD and the building anticipation for Star Wars Episode III, Hasbro's new Star Wars line is once again poised to ignite the imaginations of kids and Star Wars fans by putting "The Force" right in their hands. Action figures equipped with innovative and realistic play feeatures are only the beginning of a toy and game universe that lets every fan young and old re-live the experience again and again.

Below is a timeline, looking at the rich 27-year history of Star Wars toys -- a veritable saga unto itself.

The first installment of the Star Wars saga, Star Wars: A New Hope hits theaters on May 25, 1977 and begins one of the biggest movie franchises of all time. Kenner Products wins the license for Star Wars property, which goes on to become the company's most powerful toy success.

Kenner changes the action figure industry forever by creating the Star Wars figures in a new dimension: 3-3/4" in height. In an effort to meet staggering demand, Kenner offers an "early bird kit" -- a sealed promise certificate for the first four figures -- and sells it during the 1977 holiday season. The company also releases a line of traditional, twelve-inch figures of the Star Wars characters.

Kenner Products breaks the $200 million sales mark, doubling its sales in just three years, due in large part to the enormous success of Star Wars.

1980 - The Empire Strikes Back Toys Are A Hit With Fans

Star Wars: The Empire Strikes Back is released on May 20, 1980, and the movie-related toys are a huge success.

Star Wars: Return Of The Jedi hits the big screen on May 25, 1983, renewing interest in Star Wars toys. By now, more than 300 million Star Wars-related toys have sold since 1977.

The Star Wars line of toys continues to grow with the introduction of products tied to the novel SHADOWS OF THE EMPIRE. Star Wars toys remain the number one-selling toy for nearly 12 consecutive months.

Star Wars toys celebrate 20 years with the re-release of the Special Edition Star Wars trilogy at movie theaters and on video. More than 60 new Star Wars figures and vehicles are released. Both fans and kids make Star Wars one of the year's hottest toy lines.

1999 - Episode I: The Phantom Menace Toy Line Creates A Frenzy

In anticipation of the toys retail availability, toy stores across the country opened their doors at 12:01am on May 3rd to accommodate legions of toy-hungry Star Wars fans. The eagerly anticipated prequel, Star Wars Episode I: The Phantom Menace, is released on May 19, 1999.

Star Wars: Episode II Attack of the Clones debuted in theaters on May 16, 2002. Hasbro's 2002 product line hits stores on a month prior to the film's release to start the buzz for the movie. As part of the line, kids were able to own their very own R2--D2 INTERACTIVE ASTROMECH DROID that answered to their calls obeyed their commands and showed the spunk that made R2-D2 beloved!

Yoda noted ominously at the end of Star Wars: Episode II -- "Begun, this Clone War has!...". Bridging the story of what happens between Star Wars: Episode II and Episode III, Clone Wars is an imaginative continuation of the story line developed by George Lucas -- the tale of galactic conflict between the Republic Army and the Droid Armies. The Clone Wars aired on the Cartoon Network during a two week series in late 2003 and in the spring of 2004. Hasbro's action figure line featured figures that are loaded with mission-specific gear and vehicles from the Clone Wars fantasy.

Ever since the classic Star Wars trilogy burst onto the screen in 1977, a new generation of movie and toy fans has continued the tradition of celebrating the past, present and future of the Star Wars universe. In 2004, Hasbro builds on the tradition with the Original Trilogy Collection of autentically detailed figures, vehicles and lighsabers, this time celebrating Lucasfilm's fall release of the Star Wars Trilogy on DVD. Hasbro's Original Trilogy Collection will recapture the magic of the first three Star Wars film releases for a new generation of kids, bringing back the memorabel black-and-silver retro package look and collectible new versions of the earliest Star Wars toys. In addition to updated action figure versions of the most favorite characters from the first three films, Hasbro is bringing back one of the most legendary spaceships in the galaxy - - available for the first time since 1996 will be the Millennium Falcon taking the Star Wars brand into "hyper-drive".

Now have a look at the Star Wars Original Trilogy Collection action figure line from 2004/2005.