Thank you for joining me as I take a closer look at Hasbro's First Order Special Forces Tie Fighter vehicle from Star Wars The Black Series 6-inch toy line. The Tie Fighter was released in October 2015 and retailed for approx. $169.99 in the United States. Fellow collectors found the Tie Fighter first at Toys'R'Us retail stores and on Amazon.com.

The packaging is kept mostly black, grey and red, which gives it a classic and clean look. The front of the box has a small window in the bottom right corner which showcases the included (and currently exclusive to this set) Special Forces Tie Fighter Pilot 6-inch figure.

The elite of the First Order starfighter pilots have access to specialized craft, such as two seater TIE craft outfitted with enhanced weapons and sensor systems.

The skilled pilots of the First Order launch into combat aboard advanced fighter craft, hunting down enemy vessels and protecting space around installations and warships.

Once I had pulled out all the TIE FIGHTER pieces from the box I realized how big this vehicle was going to be. Here is a picture of my six year old son holding the cockpit next to him, and you can see that the cockpit is bigger than his head! 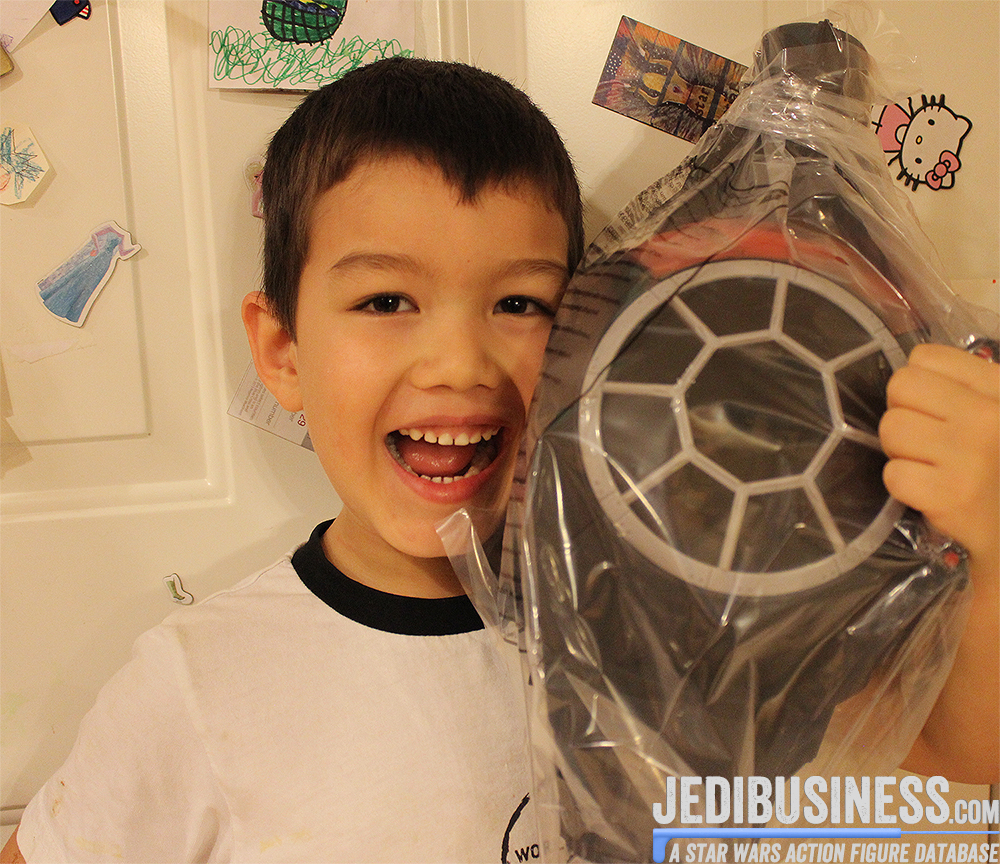 In order to assemble the TIE FIGHTER I only had to attach both wings, the cockpit hatch, the laser cannon on the bottom of the cockpit and the laser cannon on the top next to the cockpit. All the pieces snapped right into place without any issues and I had the TIE FIGHTER set up and ready to be played with in less than three minutes. Luckily Hasbro pre-painted all the details on the outside and the inside of the cockpit, so I didn't have to mess around with stickers.

It took me a while to get two pilots seated inside the cockpit because there is not much room for your fingers once the action figures are inside. However, there is a plastic piece in the middle between both chairs which can be pulled out, and that makes it easier to fit the pilots inside the cockpit.

I had heard about some Tie Fighters having warped wings, but this version had no issues. The only thing I found a bit strange was that the figure and the Tie Fighter itself had a slight film of dust on it when I removed the plastic. It was easy to wipe off, but it was still a bit strange.

I found this TIE FIGHTER to be an excellent vehicle. The wings and the cockpit are very detailed (have a look here: Tie Fighter Wing details) and even though it takes patience to get two pilots seated inside the cockpit, it's doable. Once I had the figures placed onto their seats, I was also able to make them hold the controls, which looked even cooler. The paint application is done nicely as well, the outside has subtle weathering on it and the cockpit has many "lit-up" control lights. It looks outstanding.

My six year old was quite in awe when he saw the Tie Fighter first, but it was too heavy for him to carry around and he lost interest in it very quickly. Even though the packaging says "Age 4+", this Tie Fighter is clearly for adult collectors who are looking for a centerpiece in their collection.

The size of the Tie Fighter however will likely be a huge problem for many collectors. Yes it's impressive and it looks majestic on display, but it will likely not fit onto your shelf. The other negative is the hefty price tag of approx. $169 in the United States. However, if you have the room to display it and enough money in your wallet then I am sure you will enjoy this Tie Fighter as much as I do. It looks fantastic on display and makes a great conversation piece.