A Guide To Kenner/Hasbro's Jabba The Hutt Action Figures

Kenner/Hasbro have been producing Jabba The Hutt Action Figures in their 3.75" and 6" Star Wars action figure lines since the release of The Return Of The Jedi in movie theaters in 1983. Since then Star Wars Collectors have seen a total of 9 different Jabba The Hutt figures for the 3 3/4 inch compatible scale and two Jabba The Hutt releases in the 6 inch scale (both of them were identical, but the packaging was different).

All the Jabba The Hutt figures in the 3 3/4 inch compatible line were quite different from another. Not only are there paint differences between each release, but there are also differences in the sculpts, action features, accessories and the articulation. So let's take a look at each Jabba The Hutt action figure released since 1983!

Jabba The Hutt Overview And Comparison 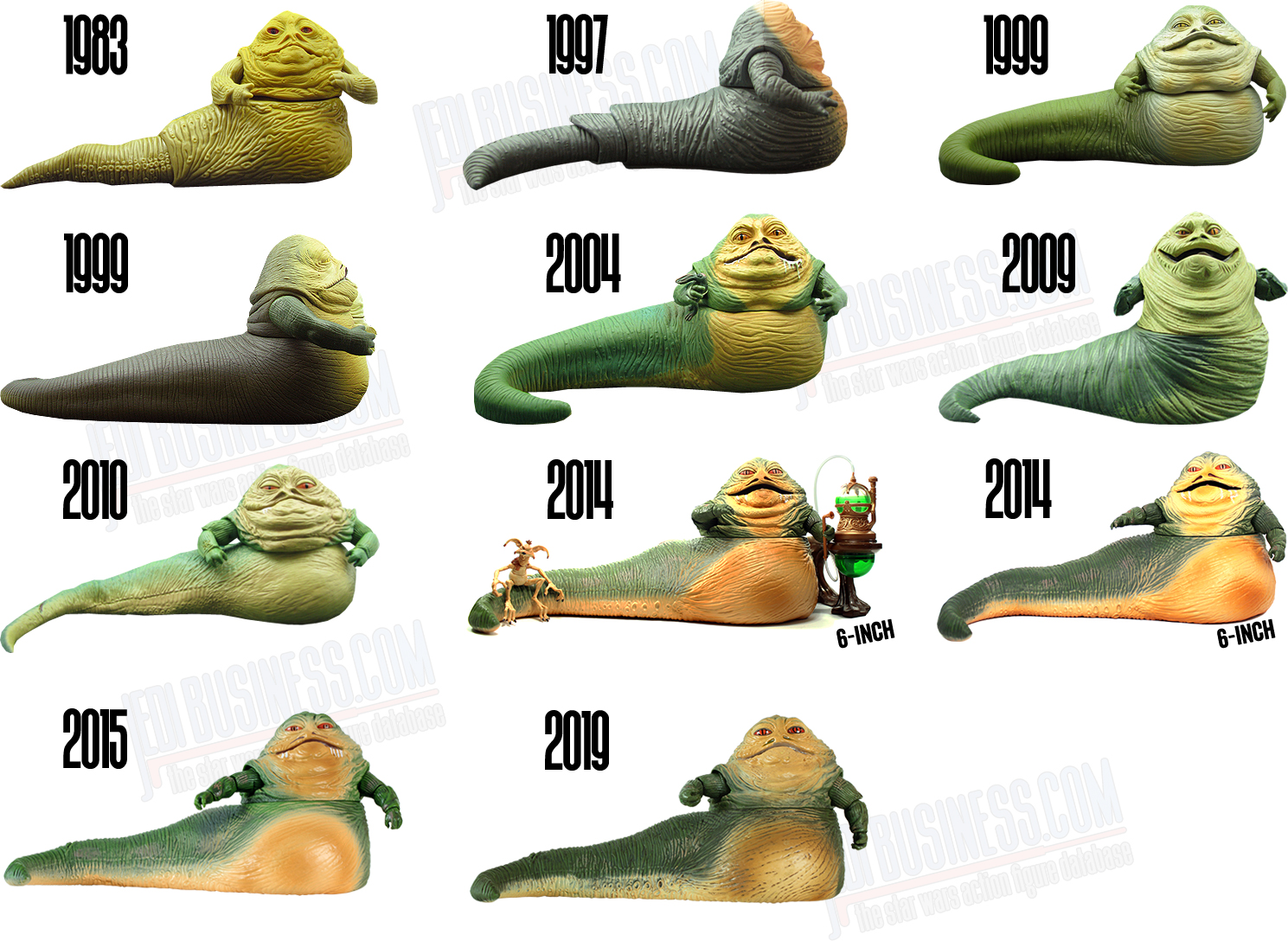 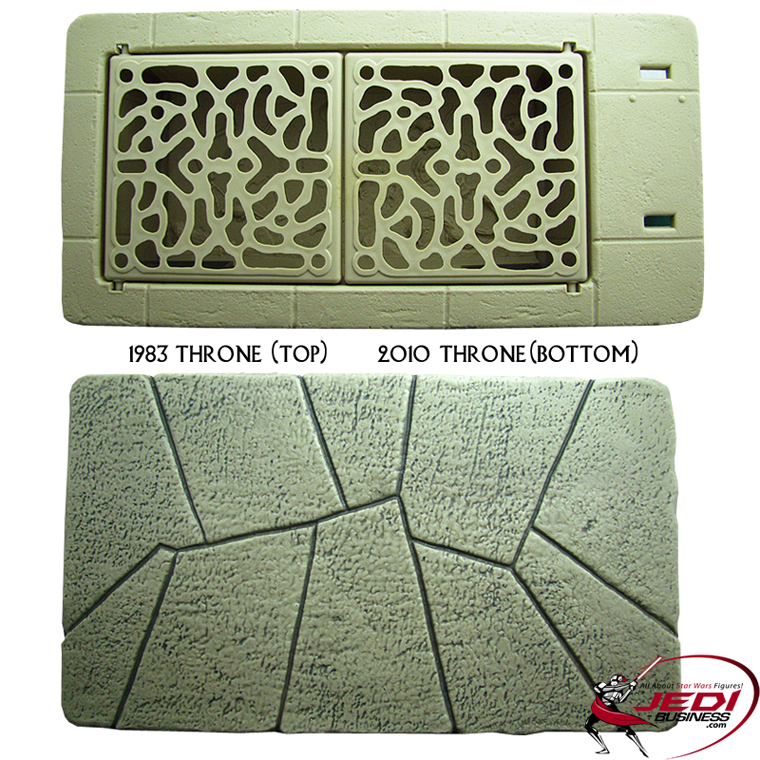 This version of Jabba The Hutt is by far the most charming and fun of all Jabbas released to date. Kenner released Jabba in a box set together with his throne, the Hookah pipe with a 3-piece bowl (top, bottom, side), the side railing (which plugs into the base) and a Salacious Crumb figure. The throne featured opening doors which revealed a prison area with various skeleton pieces, a lizard, four rat-like creatures and a snake inside. The doors open by turning the two most outer cyclope heads on the front of the throne. The two cyclope heads in the middle have a hole in each mouth where a string (prisoner chain) can be pulled through. The action feature on this figure is the tail, which when moved back and forth moves the head left or right simultaneously. Besides the head and the tail, both arms can be moved up and down. Jabba's body is made out of a hard-plastic shell and the eyes are made out of a clear, see-through plastic with the eyeballs painted behind it.

Compared with the other Jabba The Hutt figures made for the 3 3/4 inch scale, which have their tails to the side, this version stands the tallest. It's also worth mentioning that Kenner gave Jabba 3 fingers on the right hand, and 4 fingers on the left, while all other Jabba figures have 4, except for the 2010 release which has 3 fingers on both hands. 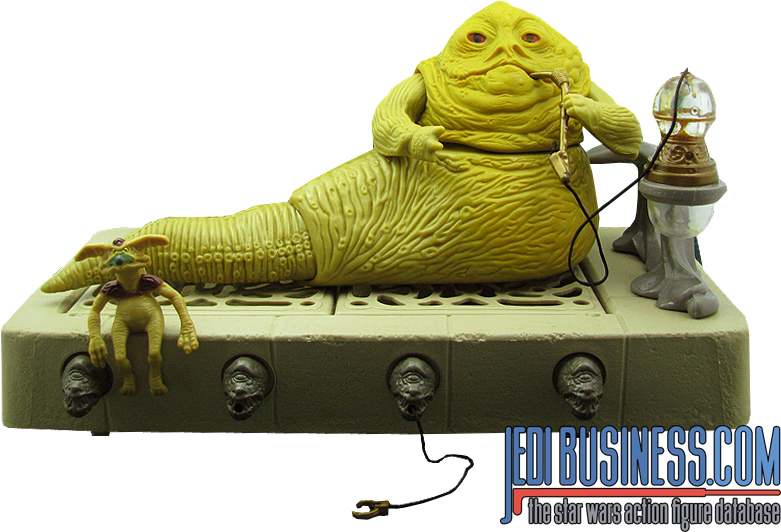 This Jabba The Hutt figure was released during the Power Of The Force toy line together with a Han Solo action figure in 1997. Jabba is based on a new additional scene which was added to the Special Edition of the original Star Wars movie. The figure's action feature is in the 2-piece tail, which just like the vintage version moves the head back and forth when it's moved left and right. Jabba is facing forward, with the tail pointed to the back, and it is not possible to move the tail sideways.  Just like the vintage 1983 version of Jabba, this figure uses clear see-through plastic for the eyes and a hard-plastic shell for the body. 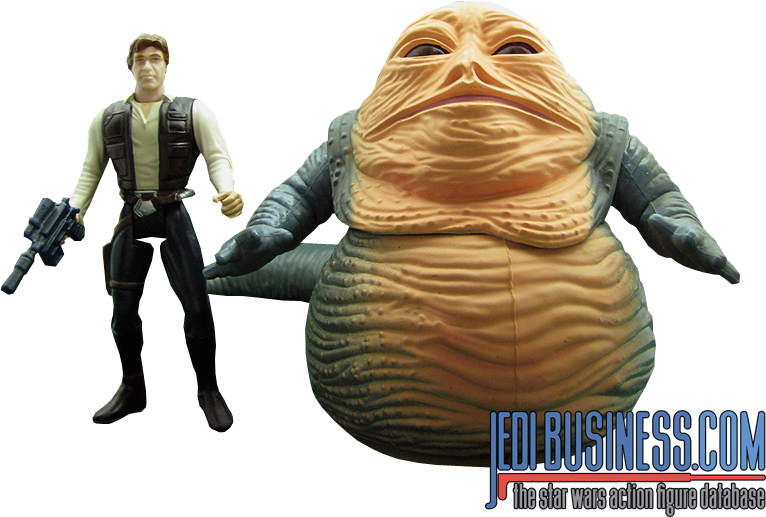 For more information, please take a look at our POTF2 Jabba entry.

In 1999 Hasbro released two Jabba The Hutt figures in one year. The Episode 1 Jabba The Hutt figure was packed-in together with a 2-headed announcer (Fode and Beed), a Chuba (which is the projectile), plus a stand with a gong. Jabba is based on the scene where he bites the head off of a Chuba and spits it at a gong to start the podrace in The Phantom Menace.

The action feature on this Jabba is in the right arm, which when moved down shoots the projectile out of the mouth. This time around the tail is not movable, but the head and both arms are. This version of the famous slug is the tallest and longest Jabba action figure released so far. It's also the first Jabba figure, which has the eyes painted on (instead of see-through plastic) and uses a rubber, soft-plastic for the outer body. 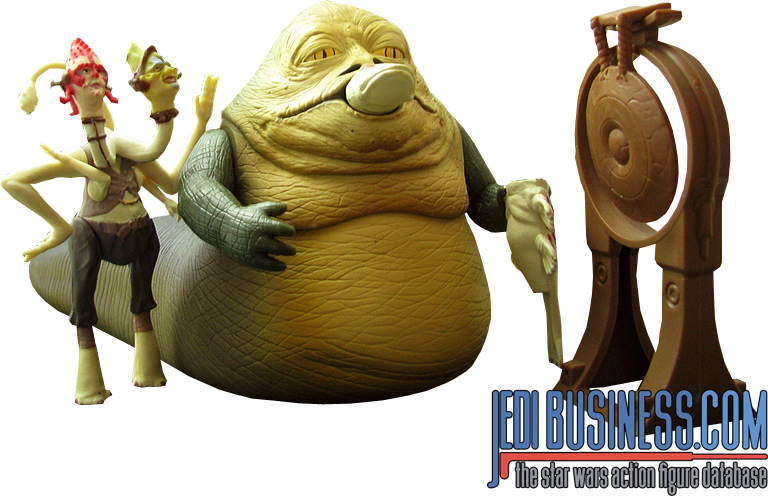 This version of Jabba was the first Return Of The Jedi based Jabba since the vintage version, which in 1999 was 16 years prior. The improvements in sculpting and painting techniques are apparent right away when both figures are compared side-by-side. The "glob Jabba" featured various different skin colors ranging from light brown to dark green, whereas the vintage version only featured a light green color. Another big difference is the soft plastic used for the body, instead of the hard-plastic shell used for the vintage Jabba.

One of the reasons as to why Hasbro didn't release this figure with a throne environment was probably because of the Jabba's Palace 3D diorama which had been released one year prior in 1998. The fold-out cardboard showed the inside of Jabba's Palace and had its own throne section with enough room for Jabba to sit on.

Packed-in together with the figure were six little Chuba creatures which could be placed inside Jabba's mouth. Besides the Chubas, Hasbro included a small plastic container with play gel ("glob"). In order to use it, you had to take Jabba's head off and place the container inside the body. Once the head was back on you could squeeze Jabba's head and "glob" was supposed to come out of the mouth and give the slug a slimy appearance. 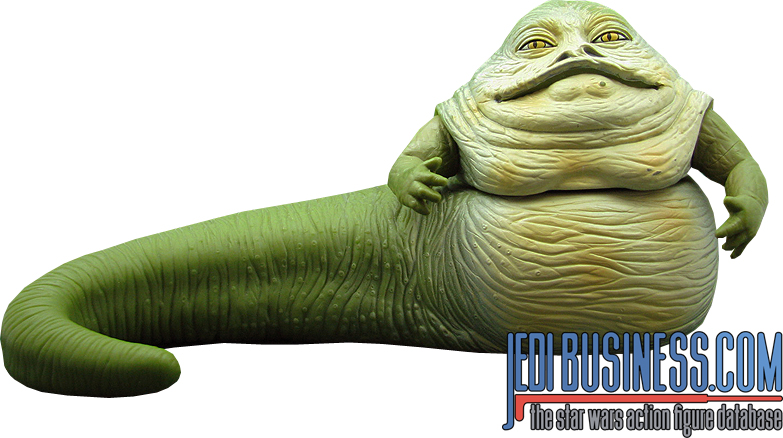 This Jabba The Hutt figure was released five years after the "glob version" and it seemed to have a slightly bigger body (despite the exact same 1998 date stamp on the bottom as the "glob Jabba") and an all new head sculpt. The body was still soft-plastic, but much harder and sturdier than the "glob" version. The paint application on Jabba was also improved compared to the previously released figure with slob around the mouth, stronger colors and more painted details in the facial area. It's also the only Jabba figure, which Hasbro gave eyelashes.

Hasbro stuck with 3 points of articulation, the head and both arms could be moved, but the tail was static. However, they did include more accessories this time around and they gave Jabba a new railing together with a new Hookah pipe and a 2-piece bowl! The bowl was a newly sculpted piece, which was almost the same size as the vintage version but it had new features a more detailed pattern. The railing was also newly sculpted, which is bigger than the vintage version with many more details in the sculpt and a much better paint application. Compared to the vintage railing, this piece was a stand-alone accessory, whereas the vintage Kenner railing had to be plugged into the base. The most interesting feature on this Jabba was the removable tongue, which could be plugged into a small hole in the mouth. If the tongue wasn't used, the Hookah pipe could be plugged into the mouth instead.

Despite this Jabba being an overall nice representation of the character it always felt unfinished due to the missing throne. 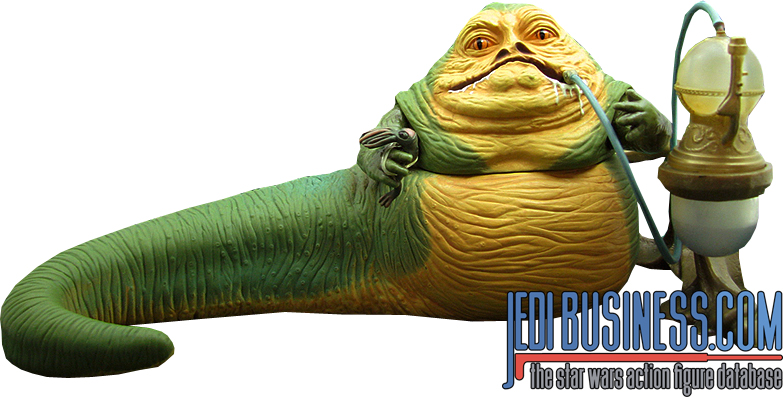 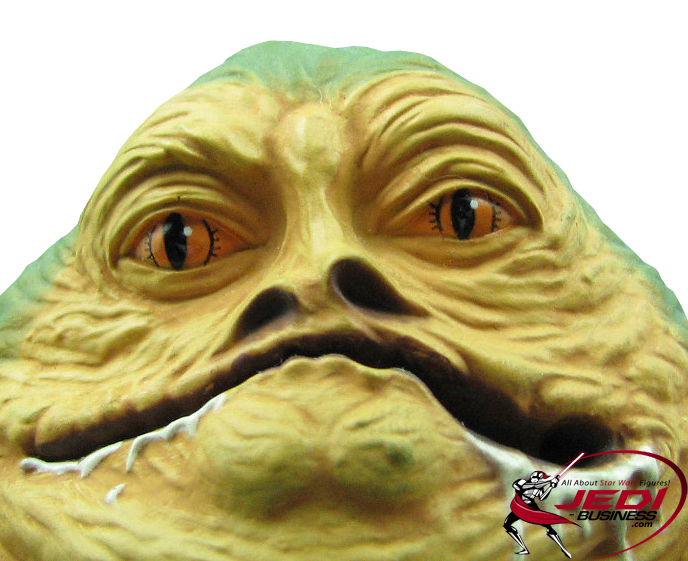 The Clone Wars Jabba The Hutt was released in 2009 and it is the most distinguished looking out of all the Jabba's released. It was sculpted in an animted look to mimic the appearance of Jabba The Hutt in the Clone Wars cartoon TV show. It is the smallest but most articulated out of all the Jabba figures available. Hasbro gave Jabba ball-jointed shoulders, ball-jointed elbows, swivel wrists and a swivel head. This figure can actually hold a small blaster. The only action feature in this figure is the mouth area, it can be pushed in, which then reveals a nicely detailed open mouth. For this release Hasbro re-used the previous railing and including the Hookah pipe and bowl from the 2004 Ultra Jabba. Even though the pieces are identical, there are small paint differences, with the Clone Wars version appearing slightly darker.

For more information, please take a look at our Clone Wars Jabba entry. 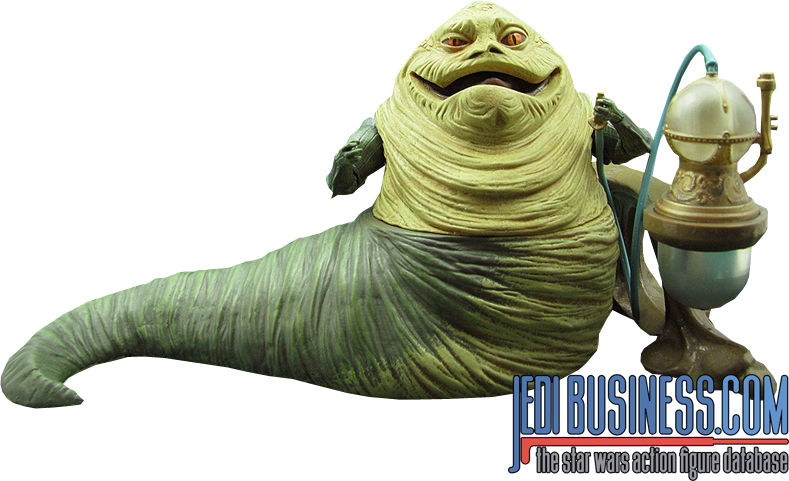 This Jabba The Hutt figure was released in August/September 2010 as a Walmart exclusive and for the first time since 1983, Hasbro released a full Jabba set which included a newly sculpted throne. Besides the throne, Hasbro included a new Oola action figure, a new Salacious Crumb figure and pillows for the throne. Hasbro re-used the previously released railing and Hookah pipe from the Ultra Jabba and the Clone Wars Jabba, but repainted it, and added a new 2010 copyright (instead of 2003) on the bottom. Jabba himself is all new and features a wire in the tail which lets you reposition it easily.

The throne is shorter in height and length than the vintage Kenner 1983 version, but it's deeper which gives Jabba more room on the throne. The prison area underneath Jabba is now gone but it features some nice "stone" patterns, which looks great and matches the movie better. The throne now has six cyclopses (4 in the front, 2 on the sides) instead of only four as seen on the vintage version). They now all have the rings through them just like it was seen in the movie. It's also interesting to note that Hasbro gave Jabba three fingers on each hand while all the other released versions had 4 fingers (except the vintage version, which had 3 on the right, and 4 on the left hand). In addition to the wire in the tail, Hasbro gave Jabba ball-jointed shoulders, ball-jointed elbows and a swivel head. 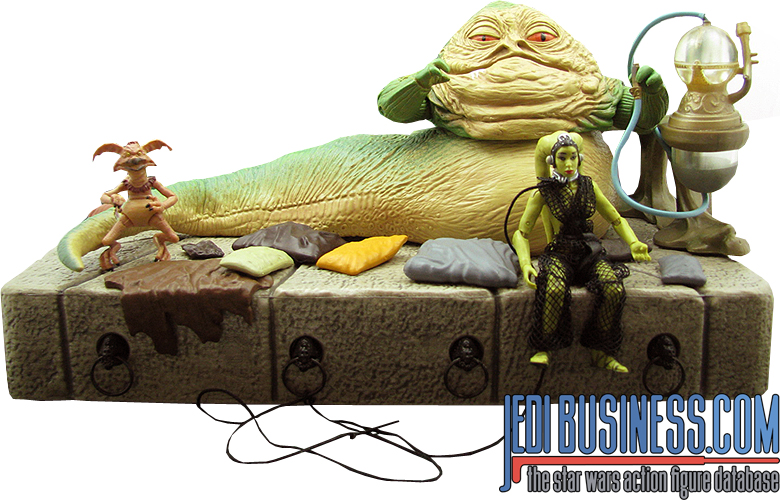 This Jabba The Hutt was released in July 2014 as a San Diego Comic Con exclusive. The figure was released in a beautifully designed convention excluisve box which included the railing, the hookah pipe and a never-before-made Salacious B. Crumb. Unfortunately there was no throne included with this release. One side of the box, by Jabba's tail, is room to place Han Solo in Carbonite which had been released one year prior at San Diego Comic Con 2013. The regular retail version of Jabba The Hutt was identical to this release, but it didn't include Salacious B. Crumb or any extra parts.

The hidden action feature can be triggered when one of Jabba's arms is moved down, it opens the mouth and reveals Jabba's tongue. 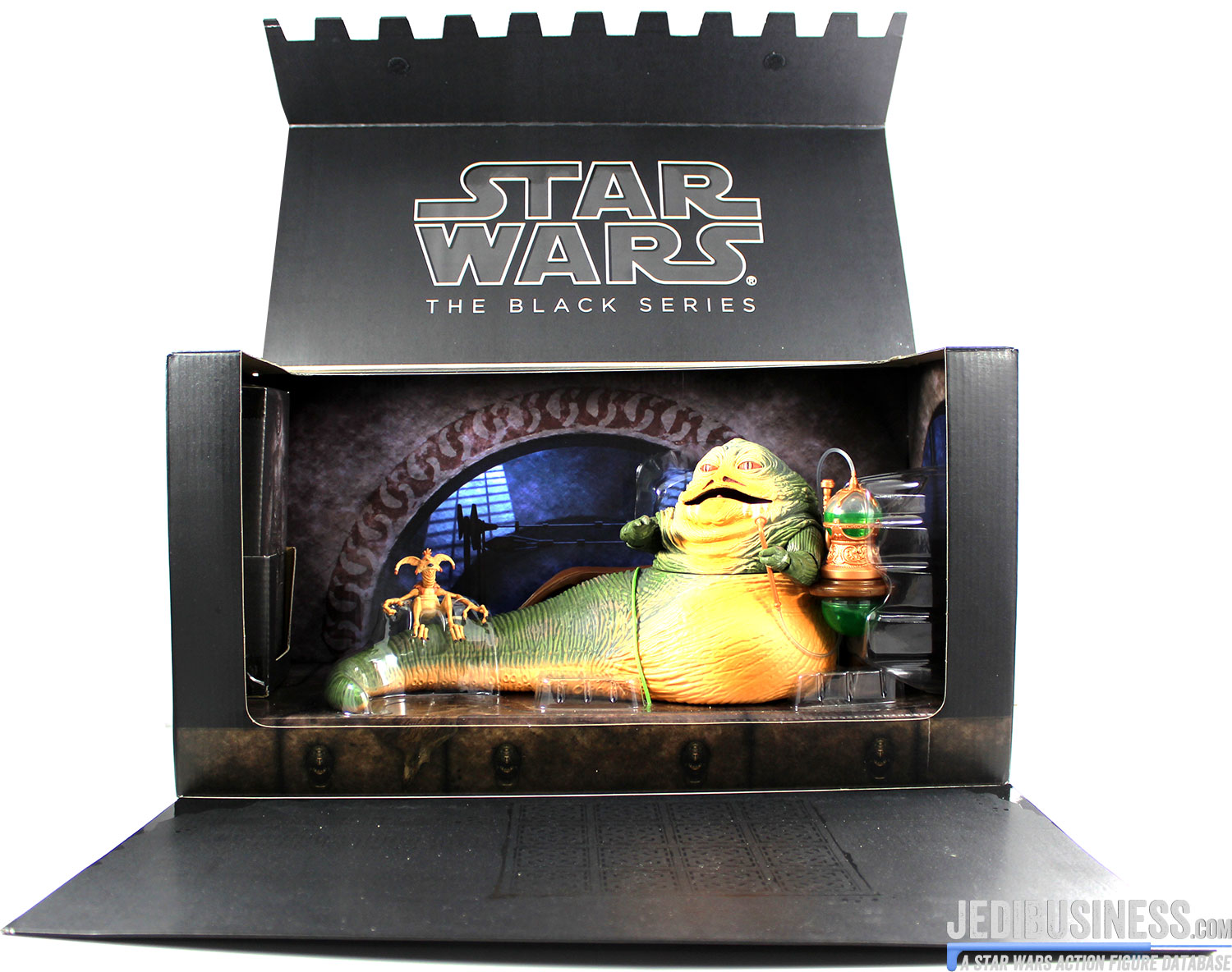 The regular retail version of the Black Series 6" Jabba The Hutt figure was identical to the San Diego Comic Con release, except it was sold in stores by itself without any accessories or Salacious B. Crumb. 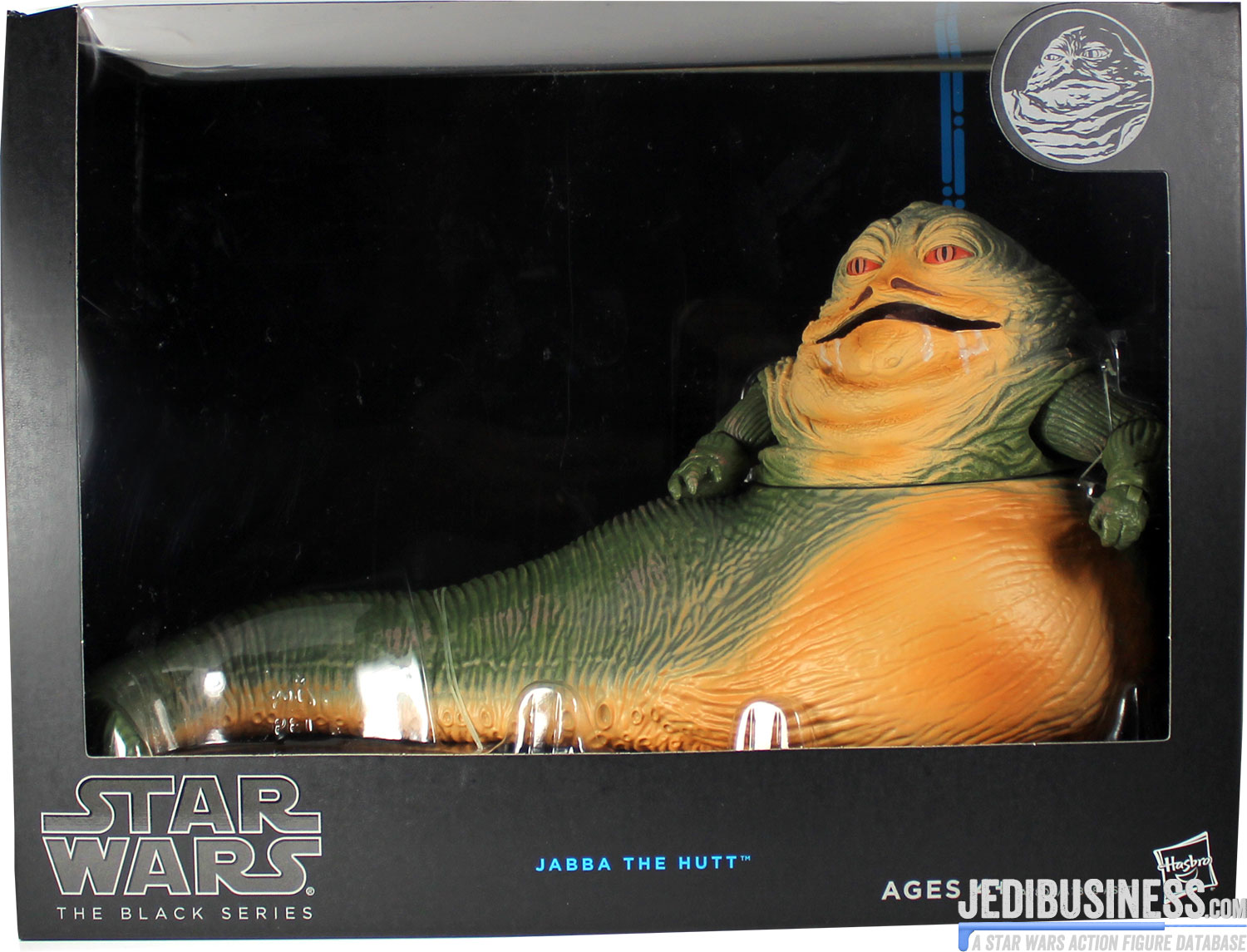 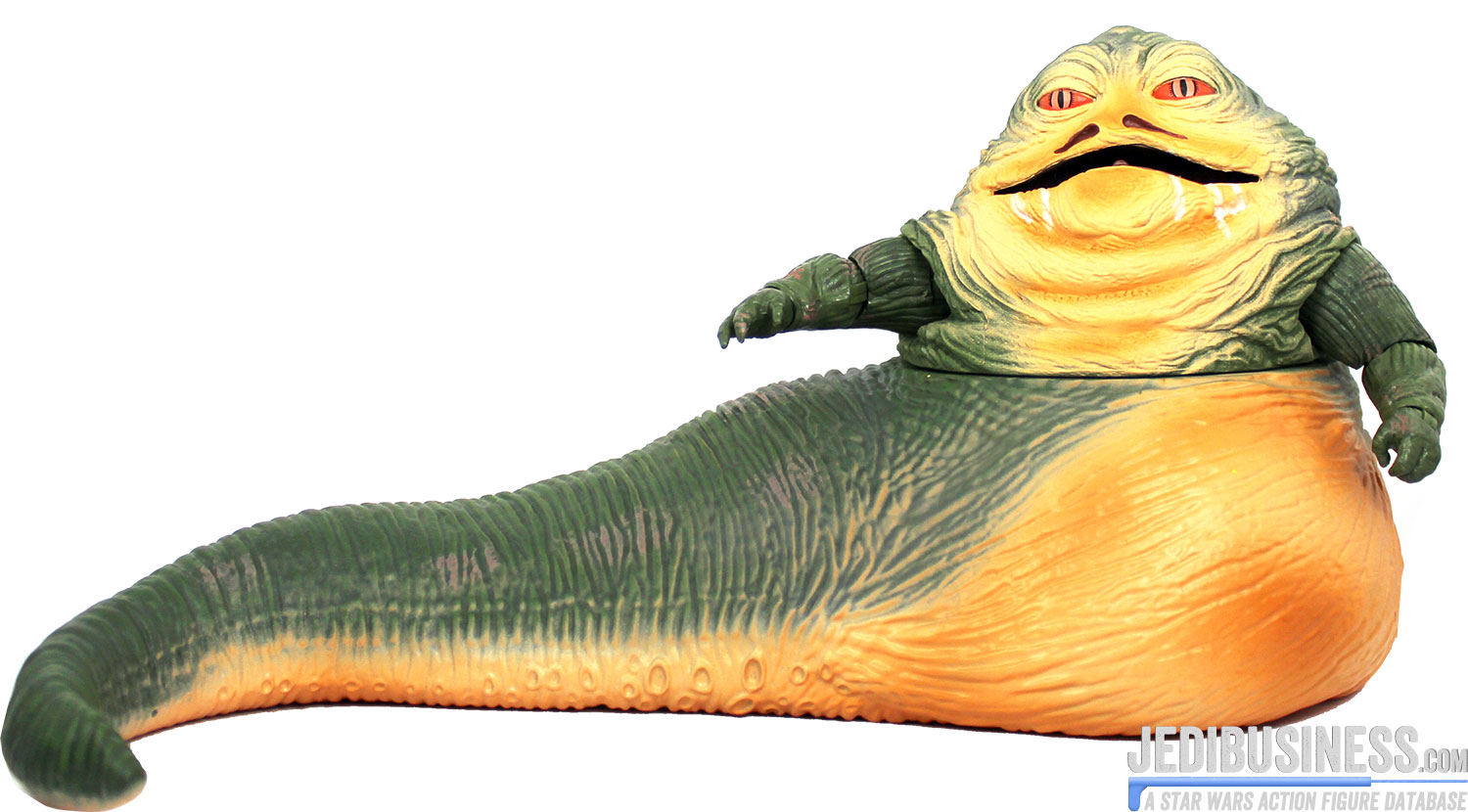 This Jabba the Hutt figure was a Toys'R'Us exclusive in 2015. It was first sold at the Toys'R'Us/Entertainment Earth booth at San Diego Comic Con and was later sold at regular Toys'R'Us stores in the United States. You can clearly see that this figure is based on the previously released Black Series 6" Jabba The Hutt figure, especially the white drool markings stand out in comparison.

2019 The Vintage Collection/HasLab Jabba The Hutt

The Vintage Collection Jabba The Hutt figure is a repaint of the 2015 version and was exclusively available with the Jabba's Sail Barge.

Jabba The Hutt action figures since 1983 ... all of them different, all of them charming with their own cool features and looks. The most accomplished Jabba The Hutt figures released are either the 1983 vintage Jabba, or the 27 years later released 2010 Walmart exclusive Jabba, simply because they were sculpted nicely and included the throne, extra figures and accessories.