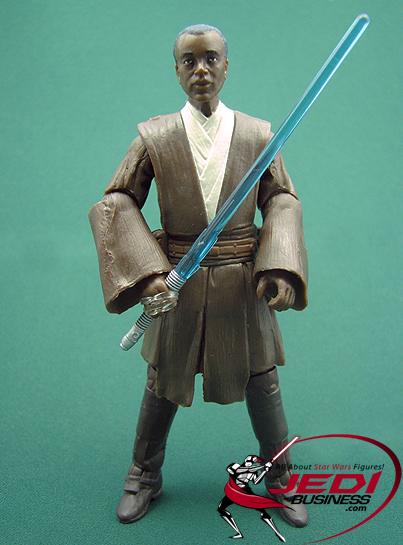 Jedi Roth Del Masona was released in a Target exclusive 2-pack in 2009 together with a generic Super Battle Droid. The set was part of the Geonosis Arena Showdown series, which started in 2009 during The Legacy Collection, and by Fall of 2010 consisted of twelve 2-packs totaling 24 figures. The figure is based on Roth Del Masona's appearance in the Geonosian arena, where he could be seen in the background in several scenes.

Roth Del Masona is super articulated with 14 joints, including ball-joints in the neck, shoulders, elbows, knees and ankles. The wrists, the waist and both legs have swivel joints. Roth Del Masona stands nicely by himself and won't need help from a stand. The only weapon included with Roth Del Masona was a blue lightsaber with a non-removable blade. This is unfortunate, because the figure has a hole in the belt, where a non-ignited hilt could be hung from. The saber fits quite well into both of the figure's hands.

Roth Del Masona has a basic paint application. It's cleanly applied, but nothing spectacular, and there is no dirt to be found on the boots. The back of the head though is painted nicely, showing Roth Del Masona's gray hair. There is little, if anything, to complain about the super articulated sculpt with its barely visible joints. All in all, Roth Del Masona is a welcome addition to the collection, and it's nice to see that Hasbro keeps releasing characters from the movies, which have not been done before.