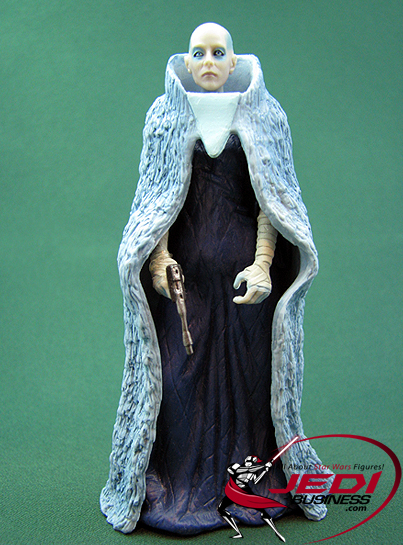 Sly Moore was seen briefly in Attack Of The Clones and Revenge Of The Sith. The figure was released during the post Original Trilogy Collection waves. The figure itself looks fantastic, with a paint job that is spot on and a face sculpt resembling very closely to what Sly Moore looked like in the movies. The blaster fits nicely in both hands, and the figure has no problems standing on its own. The hard-plastic cloak fits tightly around the figure, but can easily be removed. Sly has the typical peg holes in her feet, but the figure stands securely without any additional help (with or without the cloak). Unfortunately, the figure has only 5 joints (ball-jointed neck, 2 arms, 2 ball-jointed elbows), which drastically limits you as to what you can do with the figure. But, considering that Sly Moore only stood next to, or at least close to Palpatine in the movies, chances are that you don't want to position her any differently anyways. All things considered, this is a solid figure that has never been done before, and it'll look great in your Senate set-up or even as a background character in one of your dioramas.

Sly Moore is the staff aide for Supreme Chancellor Palpatine and is never far from his side. She has a piercing gaze and can only see in the ultraviolet spectrum. Her species, the Umbarans, are rumored to be able to influence and even control the minds of others. It is believed that she is very close to Palpatine and knows his deepest secrets.