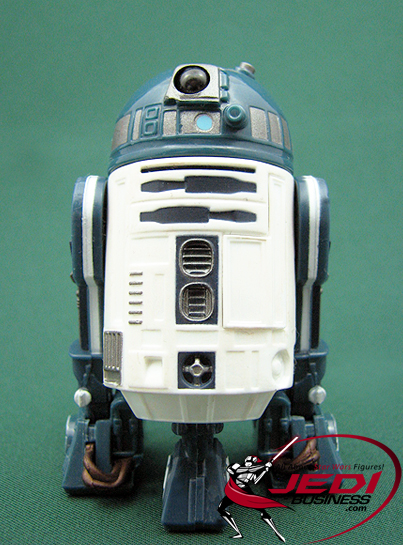 This R4-F5 figure was released in 2008 as a Walmart exclusive together with a Plo Koon figure. The question is, was R4-F5 ever seen in a Star Wars movie? We'll probably never know for sure, but we can assume that he was helping Plo Koon pilot his Jedi Starfighter when he was attacked during the Order 66 in Revenge Of The Sith.

The droid has 5 joints (dome with clicking sound, 2 legs, 2 ankles), and you can put him on two legs by unplugging the middle leg. All of his legs have little rolls in them, so you can move the astromech droid around. When you turn the dome, a sensor scope in his dome moves in and out, which makes for a cool little gadget. None of the panels are removable and there are no hidden gadgets other than the sensor scope. Hasbro didn't include any weapons or accessories with the figure.

You will not find any kind of dirt or battle markings on this R4-F5 figure, but the paint is cleanly applied and looks good. All in all, if you can't get enough of astromech droids, or if you think that your Plo Koon figure really needs a little droid by his side, this figure is for you!