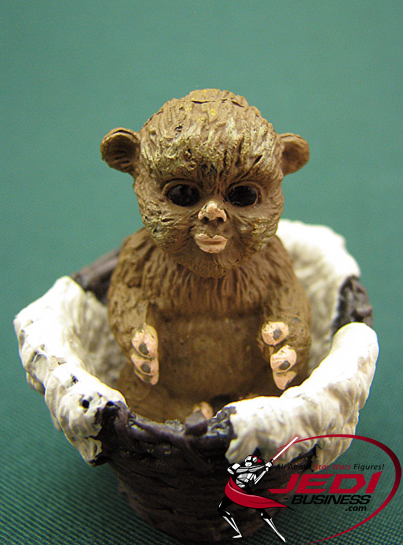 Baby Ewok Nippet was released in wave 1 of 2008's The Legacy Collection together with an Ewok Leektar figure. Nippet was more an accessory than a stand alone figure due to the very small size. However, since Nippet is its own character, and can be seen in The Return Of The Jedi's Ewok Village scenes, we decided to give Nippet its own figure entry.

Nippet has no movable parts. The paint application is pretty well done for such a small figure. There are different shades of brown on it with some light gray highlights in the facial area. The Ewok's hands and feet are painted nicely as well. The Ewok basket has just the right size to fit Nippet in perfectly.

As a pack-in bonus, this baby Ewok is a nice extra and it adds some incentive to getting Leektar since this is the first time that Hasbro has ever released a baby Ewok.

Leektar is all too familiar with the threats of stormtroopers, having earlier saved an Ewok scouting expedition from attacking stormtroopers. Nippet the wokling is too young to take part in the Battle of Endor, but is delighted by the victory celebration that takes place in her village.