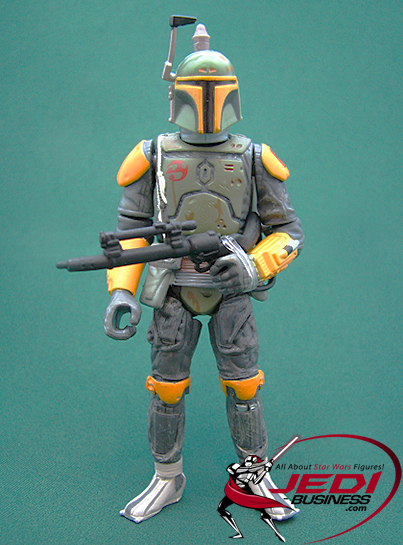 This Jodo Kast figure was released individually carded during the Legacy Collection in 2008. Jodo Kast appears in Playstation One's videogame Ter+ñs K+ñsis and various Star Wars literature based on the expanded universe.

The Bounty Hunter has a total of 12 joints, only featuring ball-joints in the knees and ankles. Because of this, the figure's stance can be adjusted in a way so that it stands securely without the need for a stand. All other joints are swivel joints, which limits the way you can display the figure. Hasbro gave Jodo Kast an action feature, when you press and release the rocket on his jet pack, both of his arms move up and down. Because of this, both arms are very loose and can't be positioned so that they stay up (for rifle aiming etc...).

The paint application is well done without any factory errors or smudges, and the strong yellow and green colors look pretty cool. Jodo Kast's helmet is not removable, but the range-finder on the right side of the helmet is. The included sawed-off blaster rifle doesn't fit well into Kast's hands and will fall out when you try to re-position the figure.

Overall, this Jodo Kast figure is disappointing. For children this might be a good figure, but collectors don't need action features, loose joints, limited pose-ability, and a figure which can't hold it's own weapon correctly.

Wearing Mandalorian armor, this cunning and ruthless bounty hunter lets everyone assume he is Boba Fett to take advantage of FettGÇÖs notorious reputation. Unfortunately, the real Boba Fett is not flattered by KastGÇÖs impersonation and intends to stop him.