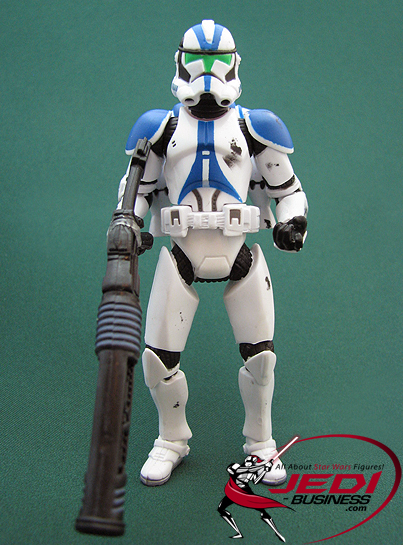 This Clone Jet Trooper figure was released in a PX Previews exclusive 6-pack in October 2007. The Jet Trooper could be seen in the Battlefront II video game which was released across multiple gaming platforms.

The figure has a total of 12 joints, but only utilizes ball-joints in the knees and ankles. There are no balancing issues, but the trooper has peg holes in his feet so you could use a stand if you want to add more stability. The jet pack can be attached and plugged-in into a hole on the figure's back. It attaches firmly and seems to be a good fit. The included EMP Blaster looks a bit big at first glance, but still seems to be in scale with the figure. The paint application is well done with some battle markings on the front and back (incl. the jet pack) of the clone trooper's armor and leaves a good impression.

All in all, this Jet Trooper figure is pretty solid, and a great likeness to the video game character makes up for the lack of joints in the wrists and overall lack of ball-joints!