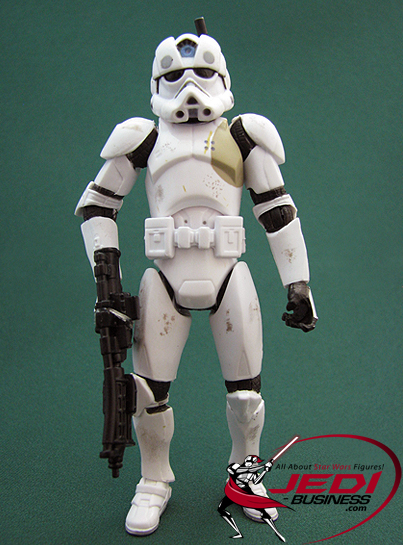 This Clone Engineer figure was released in a PX Previews exclusive 6-pack in October 2007. The Engineer could be seen in the Battlefront II video game which was released across multiple gaming platforms, but was never seen in any of the movies.

The figure has 14 joints, including a ball-jointed waist. The clone's helmet is not removable and features a cool design which we have not seen before. Hasbro included a typical droid blaster with the figure instead of a typical clone blaster, but it fits OK into both of the trooper's hands. Luckily the antenna is removable and can be plugged into the back of the figure if you want. However, the character in the game doesn't appear to have an antenna. Thanks to articulated ankles and knees you won't have any balancing issues with this figure.

The paint job on the clone engineer is pretty cool with lots of dirt and smudges on the armor. Overall, this clone engineer figure is a never been done before, super articulated action figure, and a welcome addition to any clone army!

Clone engineers support the combat forces by repairing weapons and equipment and using their technical expertise for defense or assault.