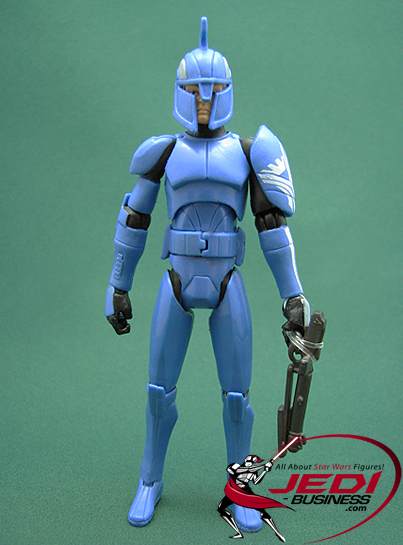 This Faro Argyus figure was released during The Clone Wars Collection in October 2009 and is based on the character's appearance in the first season of the Clone Wars animated episode "Cloak Of Darkness".

Hasbro utilized the popular Clone Trooper mold for this figure. Captain Argyus has 14 joints, including ball-joints in both wrists. Thanks to ankle joints and adjustable knees you don't run into any balancing issues. The blaster is a firm fit for Argyus' right hand, but keeps falling out of his left one. The Senate Commando helmet is a good fit and covers the entire head well.

Captain Argyus is a very simple looking figure with only blue color on his entire armor, back and front. There is no dirt or any kind of wear on it. What makes this figure interesting though is the head sculpt which looks very close to the character seen in the animated Clone Wars show. The markings on the helmet and on Argyus' right upper arm seem to be a good match as well to the original source. All in all, this Captain Argyus figure is a super articulated action figure based on a character which as never been done before. It's a bit simple looking, but since there haven't been any Senate Guard figures released so far in the animated line, you might want to look into adding this one to your collection.

Senate commando Captain Argyus assists in the transportation of captured Separatist leader Nute Gunray. A member of the Senate Guard, Argyus fights the battle droids that have attacked the ship in an effort to free Gunray. But Argyus has a secret agenda that will jeopardize the successful completion of this important mission.