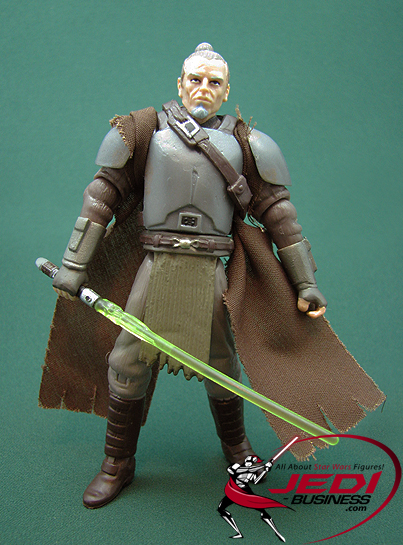 The Jedi has 14 joints, including a ball-jointed neck, shoulders, elbows, knees and ankles. There are swivel joints in both underarms, the waist and both legs. There are no balancing issues, but if you prefer to place the figure on a stand you can use the one which Hasbro included. Besides a stand, Hasbro included a green lightsaber, a removable bandolier with holster on the back, 2 removable soft goods capes and a removable chest armor with the figure. Kota can hold the lightsaber with both hands tightly, and it's also a good fit for the holster on the back. However, why a Jedi Master would carry an ignited lightsaber like this on his back is anybody's guess. The bandolier and the chest armor fit both well and compliment the figure nicely.

Kota's paint application is cleanly applied, but unfortunately there isn't any kind of weathering on the figure. The chest armor in the game appeared to be more of a silver color instead of a dull gray the way it was used on the figure. Since Rahm Kota appeared pretty beat up in The Force Unleashed it would have been nice to see the figure reflect this better. The mold is done pretty well, and while not 100% accurate, it's close enough to what Kota looked like in some of the scenes in the game. All in all, it's a well done, super articulated Rahm Kota figure, which should please fans of The Force Unleashed video game.

Rahm Kota's lack of faith in the clone troopers during the Clone Wars allowed this Jedi General to escape Order 66. After many years in exile, he launches a dangerous plan that leads to an unexpected encounter with Darth Vader's Secret Apprentice.