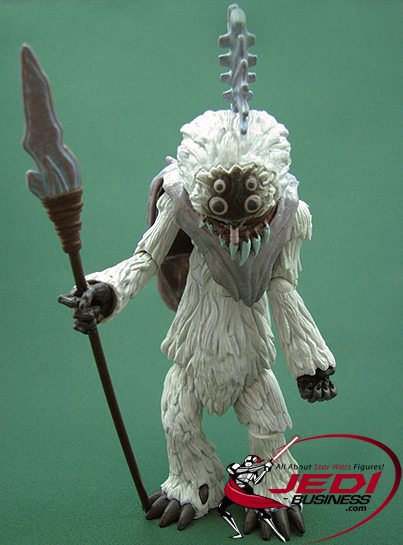 The Talz's chieftain Thi-Sen was released single carded in early 2010 in the basic Clone Wars assortment. Thi-Sen can be seen in the episode entitled "Trespass", from the first season of the Clone Wars animated TV show.

The figure has 12 joints, only lacking articulated ankles. Even though the ankles are not adjustable, the figure stands well without any major balancing issues. Thi-Sen's armor can be put over the head (you'll have to pop it off first) and is an overall pretty good fit and leaves enough room so that you can still adjust the arms. The headdress can be attached between the spikes on the back armor, and unfortunately this is quite difficult, because the headdress keeps leaning to one side more than the other. It'll take a while to get it to sit just right on the top of the Talz's head, if you manage to get it to stay in place at all. The spear looks pretty cool, and it fits into both of Thi-Sen's hands.

Thi-Sen's paint application is pretty good, with different shades of gray on the fur and a nicely painted facial area. The mold is also pretty well done, and the fur looks really nice, not just on the front of the figure, but all around. It's also a plus that Thi-Sen is about a head taller than other basic Clone Wars action figures, which is great, because it appeared in the "Trespass" episode, as if that species is indeed much taller than a human. It does feel as if the figure is leaning forward a bit too much, but that's not too big of a deal. All in all, this Thi-Sen action figure is a great addition to the growing line-up of Clone Wars characters.

Thi-Sen is chieftain of the powerful Talz warriors who inhabit the planet Orto Plutonia. Wearing distinctive armor, the fierce leader fights to keep his people free when a representative from the nearby Pantora moon claims jurisdiction over the ice planet.