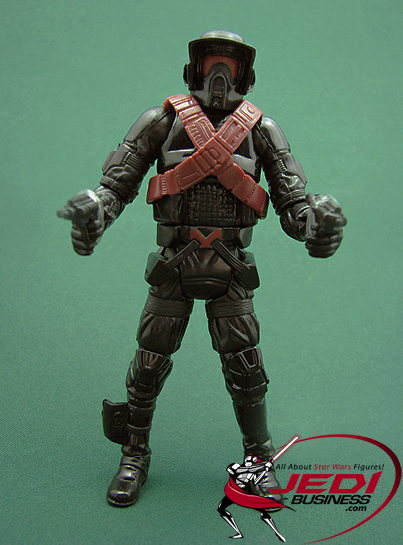 This General Weir figure was released in March of 2010, in The Legacy Collection's Walmart exclusive comic 2-pack. The set included this figure, and a Storm Commando trooper. General Weir was featured in the comic book series "X-Wing: Rogue Leader".

The figure is super articulated with 14 joints, with all of them being ball-jointed except for the 2 swivel joints in the legs. There are no balancing issues, but there are the typical peg holes in both feet, so you could place him on a stand if you'd like. The blasters are a great fit for General Weir's right hand, but they don't fit into his left hand and keep falling out. However, there is a holster located on the right boot, and you can store one of the blasters in there. The red harness, which General Weir has hanging around his chest is removable by pulling it over his head. The biker scout helmet is also removable and covers the entire head, front and back nicely.

General Weir's paint application is cleanly applied, with a glossy black armor and some red on the harness, and some red accents on the belt buckle and the helmet's eye area. The face sculpt is well done, and looks pretty close to what was seen in the comic books. All things considered, this General Weir figure is OK. It's hard to judge, because it just feels a little plain and simple with only 2 colors on the figure (if you ignore the head). However, it's a super articulated figure, which looks very close to the counterpart in the source material, and chances are if you are fan of the comics, you'll appreciate this release.

General Weir launches a counter-rebellion after the Battle of Endor to undermine the Rebel Alliance. The Imperial general discovers that Luke Skywalker is in the city of Coronet and, with his stormtroopers and storm commandos, goes after the Rebel hero.