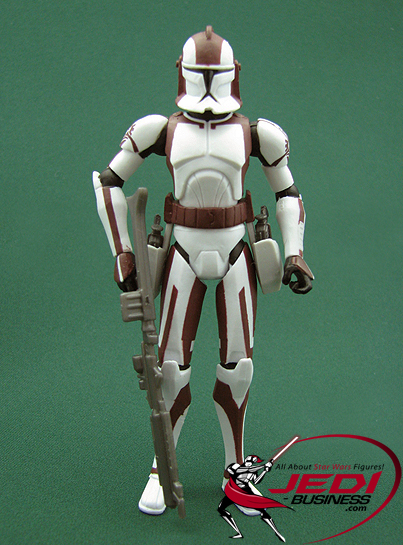 Commander Stone has 12 joints, only lacking articulated ankles. However, the clone trooper doesn't have any problems standing by himself without a stand. The blasters sit a bit loose in the figure's hands, but they do fit. The same goes for the blaster rifle. Commander Stone's helmet is a great fit. The non-removable holsters on the Commander's belt look a bit bulky, but they house both blasters quite well.

The paint application on Commander Stone is cleanly applied and the markings on the armor appear to match the character's armor in the TV show. However, there is no weathering or dirt to be found on the armor. Commander Stone's tattoo on the left side of the forehead is also on the figure, but it's a bit hard to see. All in all, the only disappointing thing about Commander Stone is the lack of ankle joints (a ball-jointed waist and ball-jointed wrists would have been nice too), but besides that, it's a never before released clone trooper figure, which should please fans of the Clone Wars animated series.

Commander Stone takes part in a mission to rescue Republic hostages being held by Weequay pirates. The clone commander battles the ruthless pirates and dodges sulfuric geysers to help Jar Jar Binks deliver the ransom and free the prisoners.