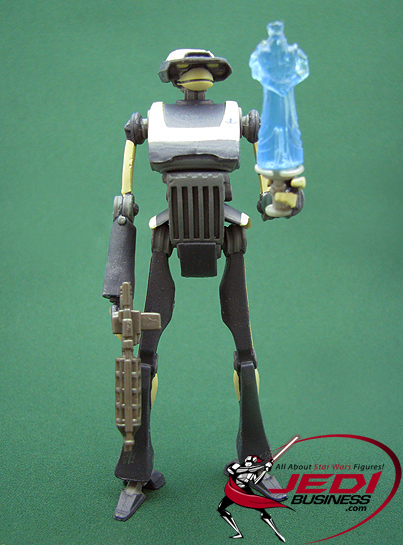 Tactical droid commander TX-20 was released single carded in the basic Clone Wars assortment in early 2010. TX-20 can be seen in the Clone Wars episode "Innocents Of Ryloth", from the first season of the Clone Wars animated show.

The droid has 12 joints, including ball-joints in both legs, but it's missing bendable knees. However, since you can adjust how far both legs should be apart from each other, it's very easy to get the figure to stand on its own. The droid blaster fits very well into both of TX-20's hands, but the Wat Tambor hologram base keeps falling out and fits very loosely. The droid also has problems holding the projectile firing gun, which just doesn't want to stay in either of the figure's hands. The Wat Tambor hologram is done very nicely and considering that it's only the size of a finger nail, it's very detailed, and you can easily make out that it's indeed the leader of the Techno Union.

TX-20's paint application is only average. There are some factory smudges on the chest, which doesn't look too nice. All in all, the figure's mold is nicely done, especially the ball-joints in the legs stand out so the stance can be widened. However, the in some areas sloppy paint application, and 2 out of 3 accessories which the figure can't hold properly, prevent it from being a top-notch representation of the character.