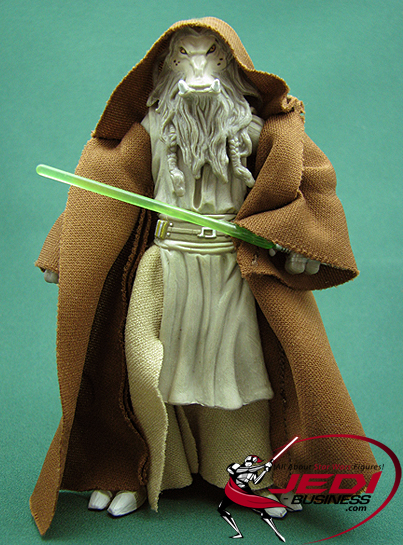 Jedi Knight K'Kruhk was released individually carded in the last wave of The Legacy Collection in May 2010. At first, the figure was a Toys'R'Us exclusive, but was later sold in various online stores. K'Kruhk was never seen in any of the movies, but was featured in various novels and comic book stories.

K'Kruhk is super articulated with 14 joints, and even though the neck is ball-jointed, you can only barely move the head due to the hard-plastic beard in the front and the hair in the back. The Jedi Knight stands very securely on his own without help from a stand. K'Kruhk is a very tall figure and has about Chewbacca's height, which means he's about one head taller than a basic Star Wars figure. There were two accessories included with the figure, a green lightsaber and a jedi robe. The lightsaber fits very well into both of K'Kruhk's hands and it won't fall out when you move or reposition the arms of the figure. The Jedi robe can easily be put on or taken off, but it unfortunately looks pretty bulky. There is no wireframe in the robe, and it will take a while to make it look the way it's supposed to, if you ever get it the way you want it to look.

The paint job on K'Kruhk is pretty basic and looks pretty simple, with a typical brown jedi robe, and a gray, dull brown color on the Jedi Knight's clothes. There is no weathering, dirt or any battle markings on the figure. And while the paint application isn't the most exciting part of the Jedi, the figure's mold is. It's a tall, nicely detailed Star Wars figure, with the head sculpt deserving extra credit. Overall, if you enjoy collecting aliens, Jedi Knights, or are a fan of the expanded universe, chances are you'll like this super articulated version of K'Kruhk!

K'Kruhk is a Jedi Knight during the last days of the Republic. Although he has the fierce nature of all Whiphids, he also holds strong pacifist ideals and struggles with the military role that the Jedi perform during the Clone Wars.