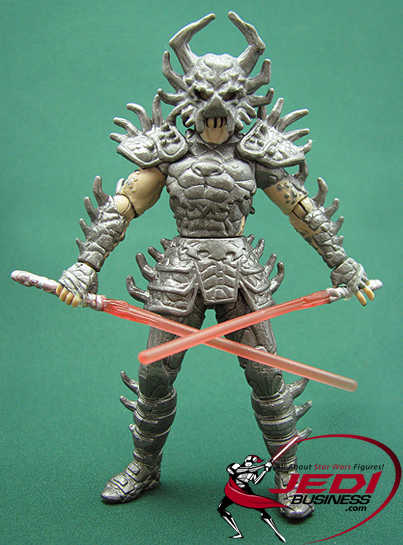 Darth Krayt was released in a comic 2-pack during The Legacy Collection in 2009 together with a Sigel Dare figure. Darth Krayt was featured in various Dark Horse Star Wars Legacy comic books.

The figure has 12 joints, with ball-joints in the neck, shoulders, elbows and knees. Swivel joints are located in the wrists, the waist and both legs. Only the ankles aren't movable. The figure stands a little shaky, but with enough patience it's possible to balance it out. The helmet and both shoulder pieces fit well and stay nicely attached. Hasbro included 2 red lightsabers, but unfortunately the figure can only hold a lightsaber in the right hand. The left hand is molded with the palm open and Darth Krayt can't hold anything in it.

The paint application on Darth Krayt is pretty simple with only silver on the armor, gray hair and black markings in the face. There is no weathering or any battle markings on the figure. However, Hasbro paid attention and painted Darth Krayt's right eye red, and kept the left eye normal, just the way it was seen in the Legacy comic book series. The figure's sculpt is nicely detailed with a great face sculpt and lots of spikes on the armor and the helmet. All in all, it's a cool looking figure and a nice addition the small line-up of action figures based on Dark Horse's Legacy comic book series.

Darth Krayt is not pleased; Admiral Stazi of the Galactic Alliance Remnant has stolen the Sith Lord's powerful new warship Imperious. Unknown to Stazi, Imperial Knights Sigel Dare and Treis Sinde have sabotaged the ship, hoping to ruin Krayt's plans. Now Dare must warn Stazi before the bombs planted on the ship explode!