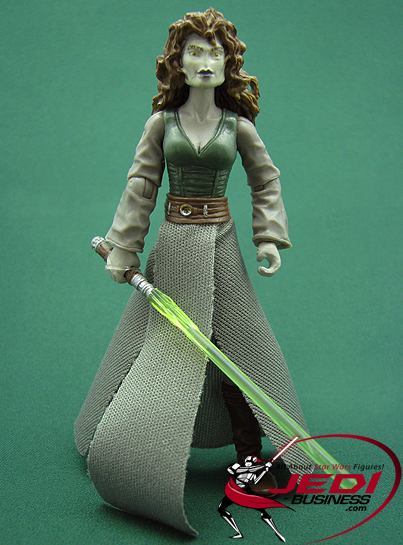 Jedi Master T'ra Saa was released in a comic 2-pack during The Legacy Collection in Spring of 2010. The second figure in the set was Jedi Master Tholme. This figure is based on T'ra Saa's appearance in the Dark Horse Star Wars Republic comic book series "Show Of Force".

T'ra Saa is super articulated with 14 joints, including ball-joints in the neck, shoulders, elbows, knees and ankles. The wrists, waist and legs are swivel jointed. Like with most Star Wars figures where you can adjust the knees and ankles, the figure has no balancing issues. The lightsaber is a very good fit for either of the figure's hands. It's also nice to see that Hasbro molded the hilt after T'ra Saa's actual "wooden-looking" hilt, instead of just including a generic one.

The figure's paint application is well applied, but with mainly browns, greens and grays, it's a bit boring. More interesting is T'ra Saa's head sculpt, which turned out very well. Just like Jedi Master Tholme from the same set, this super articulated figure turned out nicely, and is a cool addition to Hasbro's line-up of Star Wars comic book figures.

Jedi Masters TGÇÖra Saa and Tholme battle their own personal difficulties during the Clone Wars. TGÇÖra Saa is severely wounded when bounty hunters attack a triage unit she is overseeing on Null. Her close friend Tholme is alarmed when circumstances indicated that fellow Jedi Quinlan Vos has truly turned to the dark side.