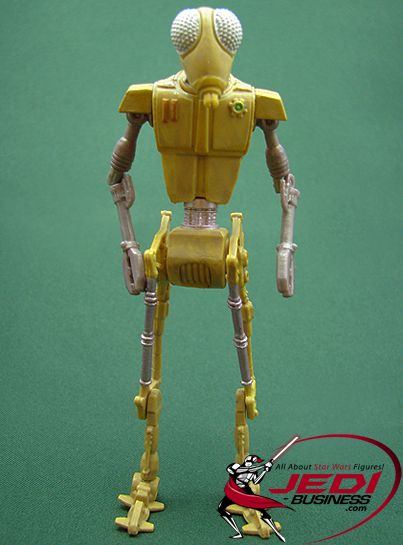 BG-J38 was released in the last wave of The Legacy Collection in May 2010 as a Build-A-Droid figure. At first, BG-J38 was a Toys'R'Us exclusive, but was later sold through various online stores. The droid could be seen very briefly in The Return Of The Jedi during the Max Rebo Band performance.

The droid has 12 movable parts, with swivel joints in the neck, shoulders, elbows, forearms, waist, legs and knees. There are also 2 swivel joints in each ankle, which gives more freedom to balance the figure out better. Because of that, BG-J38 stands very nicely on its own without the help from a stand. There were no accessories included with the droid, and there are no removable panels or antennas on the droid's body.

The paint application on BG-J38 is well done, with very subtle weathering on the front and back of the droid, giving it a dirty and used "Jabba's dungeon" look. The figure's mold is superbly done and looks very closely to what BG-J38 looked like on screen. Overall, it's a cool looking figure, and if you are looking to add a never-before-done background character to your Jabba's Palace diorama, then this is it!

BG-J38 was a build-a-droid figure, and there was no packaging text.