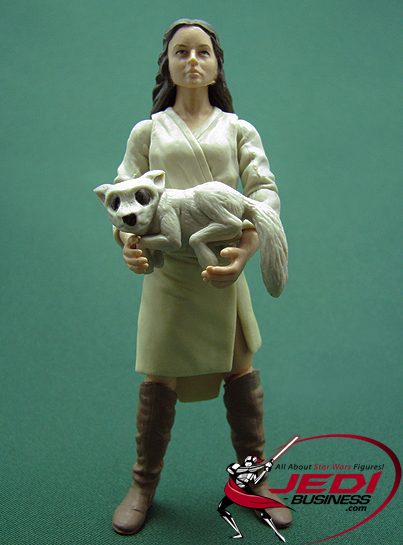 This Camie Marstrap figure was released in a The Shadow Of The Dark Side comic 2-pack together with Laze "Fixer" Loneozner. The set was a Star Wars: Celebration V exclusive in 2010 and is based on the deleted Anchorhead scenes from the original Star Wars movie.

Camie has 12 points of articulation, including ball-joints in the neck, shoulders, elbows and knees. The wrists, the waist and both legs have swivel joints. Camie's ankles can't be moved, but the figure stands quite securely anyways. The only extra included with Camie was her dog, which has no movable parts. Thanks to adjustable shoulders and elbows, the figure can hold the dog in front of the chest quite well. There were no weapons included with the figure.

The paint application on Camie Marstrap is very basic with light brown colors on the tunic and skirt, and a dark brown color on the boots. The dog goes quite well with the outfit :) There is no weathering or "Tatooine sand" to be found on the figure. The almost super articulated sculpt gets the job done, and the figure does look like Camie Marstrap from the deleted scenes. It's not one of the most exciting action figures to be released, but for fans of never-before-done characters and of the original Star Wars, this figure is definitely interesting and cool enough to add it to the collection. And, who doesn't need some side characters for a Tatooine inspired display?

Fixer and Camie meet their friends Luke Skywalker and Biggs Darklighter at Tosche Station to work on their T-16 skyhoppers. As they make plans to go swooping through BeggarGÇÖs Canyon to bulls-eye womp rats, they share their dream of leaving behind the remote desert planet of Tatooine to seek fame and glory as part of the Rebel Alliance.