Oola (Jabba The Hutt Playset) Shadow Of The Dark Side 2010 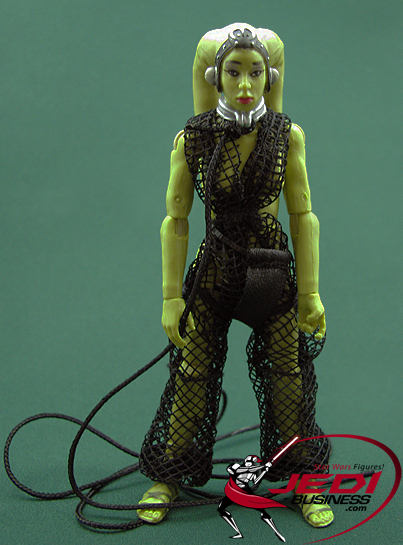 Oola was released during The Shadow Of The Dark Side collection in September 2010 as a Walmart exclusive. The figure was packed-in with Jabba The Hutt and Salacious Crumb. Oola can be seen dancing in Jabba's Palace, right before the Hutt throws her into the Rancor pit.

The figure is super articulated with 14 joints. The neck, shoulders, elbows, knees and ankles are ball-jointed. The wrists, the waist and both legs have swivel joints. The figure balances out nicely, and holds its position even in more dynamic, dancer-like poses. The articulation works quite well, and it's even possible to have Oola sit on the throne in a few different positions. There were no accessories or weapons included with the figure, which is just fine since this is the way the character was seen in the movie. The removable soft-goods outfit looks OK and is an overall decent fit.

The paint application on Oola is pretty basic, with a greenish body color. There really isn't much to it, since the only parts detailed are the feet and the face. The super articulated sculpt is nice, and matches the on-screen character quite well. If you own the 1998 Fan-Club exclusive version of Oola, you very likely want to upgrade to the new version. Not only is this one almost one head smaller than the old figure, but it now has a soft-goods skirt, instead of having most of the dress painted on. This new version has also 14 points of articulation, whereas the old one had only 6 joints. All in all, this Oola figure is very well done, and adds even more value to the already fantastic Jabba The Hutt playset.

Jabba The Hutt and Salacious Crumb sit on a throne as Oola dances for the crime lord. The loathsome Hutt is momentarily entertained by the Twi'lek dancer's graceful performance. His monkey-lizard cackles with glee, knowing that Jabba will soon turn to some other amusement, such as throwing another victim to the hungry rancor. 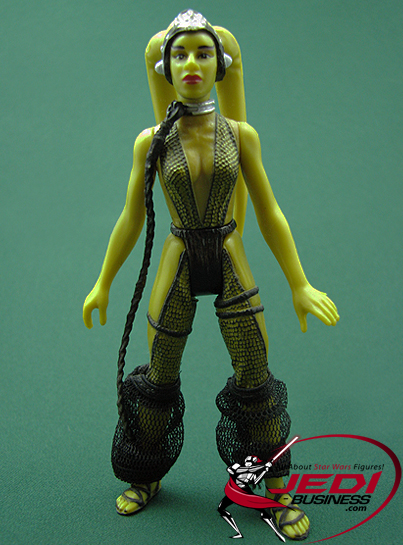