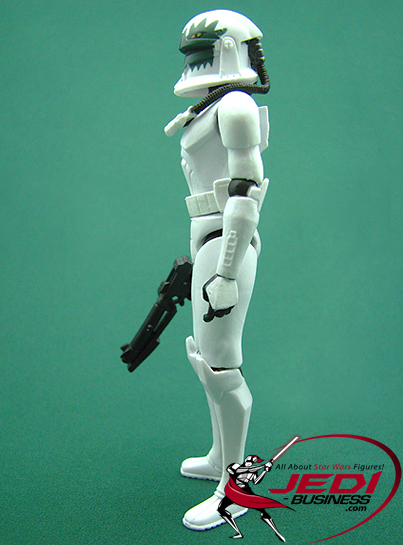 This animated-style Clone Pilot Goji was released individually carded during the Clone Wars Collection in Fall of 2010. Goji could be seen in the episode "The Zillo Beast" from the second season of the Clone Wars TV Show.

Goji has a total of 12 joints, with the neck, shoulders, elbows and knees being ball-jointed. The wrists, the waist and both legs have swivel joints. The ankles are not articulated. The pilot manages to stand on his own, but he's very shaky on his feet, and it's saver to place him on the included stand. There were two weapons included with the trooper, a basic blaster, and a gatling gun with projectile. Goji can grab both weapons very well, but if he's holding the gatling gun, he'll likely fall over due to the weight of the weapon. The pilot helmet is not removable.

The paint job on the animated-style Clone Trooper Pilot is very simple. The trooper is all white with black joints and there is no dirt or any kind of weathering on the figure. The helmet however looks very cool, and comes close to what Goji's helmet looked like in the tv show. Overall, it's an OK figure which is a bit on the boring side, but nonetheless a nice addition to any Clone Wars Collection.

A clone pilot flies a Y-Wing fighter on a bombing mission. The leader of Red Squadron unleashes a new Republic weapon designed to destroy huge numbers of battle droids at one time. The pilot uses his innate skill and extensive training to deliver the weapon accurately and defeat the enemy.