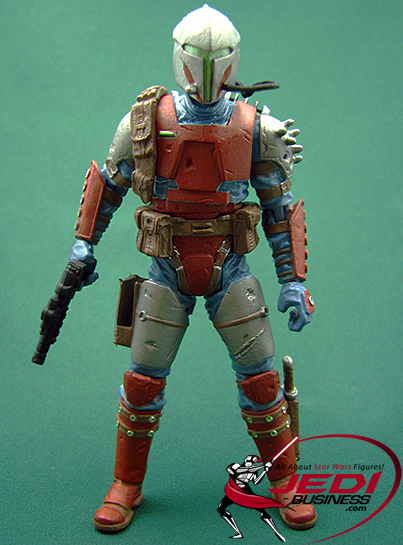 Just like Jarael, Rohlan Dyre has 12 joints, with the only non-articulated parts being the ankles. The neck is ball-jointed, along with both shoulders, elbows and knees. The wrists, the waist and both legs are swivel jointed. The figure stands a little shaky, especially with the jet-pack attached to the back. Hasbro included a removable helmet, a blaster, a knife and a jet-pack including "cable" with the figure. The jet-pack plugs into a hole in the back of the figure, but it also has a shoulder-strap attached to it, which goes over the figure's right shoulder. This helps secure the jet-pack better. There is a thin string (cable) running out of the top of the jet-pack, which can be plugged into the helmet. This really looks pretty cool. The blaster is a good fit for Rohlan Dyre's right hand, and the knife fits very well into his left. Both weapons fit also very well into each holster (the knife holster is located on the bottom left boot). The belt with all the cool pouches on it is part of the figure and can't be taken off. The helmet fits tightly and covers the entire head OK.

The paint application on Rohlan Dyre is nicely done, but a little bit more dirt and battle-damage would have been nice. The armor is sculpted in a beat-up, cool looking way, so that more dirt on the armor would have really brought out the fantastic sculpt more. The head is sculpted quite well, and the entire figure leaves a great impression. Overall, this Rohlan Dyre figure in Mandalorian armor looks great and can easily be recommended!

Mandalorian warrior Rohlan Dyre and Arkanian protector Jarael are caught up in the Mandalorian Wars that ravage the galaxy in the days of the Old Republic. The lives of these two very different people, the fierce Jarael and "Rohlan the Questioner", intersect when they meet the Force-sensitive Zayne Carrick.