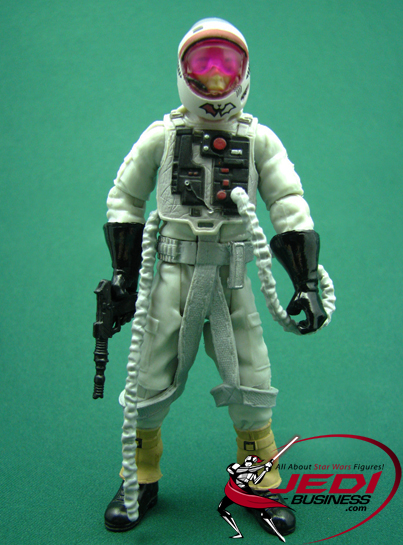 Y-Wing Fighter Pilot Lieutenant Ekelarc Yong "Gray Three" was available in a Toys'R'Us exclusive 4-pack titled "Battle Over Endor (2 of 2)", and was released in January 2011 in the Shadow Of The Dark Side Collection. The set included Lt. Ekelarc Yong, his astromech droid R5-P9, A-Wing pilot Sila Kott and Tie Fighter pilot Lt. Oxixo. Ekelarc Yong can be seen in The Return Of The Jedi being shot down during the Battle of Endor.

The figure is based on a repainted sculpt, which had been used previously on various figures, e.g. Nien Nunb or Palso Thern. This time the paint job is different, the outfit is gray, and the figure has a new head and helmet.

Ekelarc Yong has 14 points of articulation, including ball-joints in the neck, shoulders, elbows, the waist, knees and ankles. The forearms and the hip were given swivel joints. Ekelarc Yong stands quite well on his own. The figure can also easily be put into a sitting position, which should fit into any cockpit. The blaster is a very good fit for both hands, and the helmet sits perfectly on top of the head. Both life-support cables can be unplugged, but only one of the cables can be plugged into a hole on the flight suit. There is no room for the second cable to be plugged in.

The paint application on Ekelarc Yong looks nice, but we would have liked to see an overall more used look, with more scratches on the helmet. The super articulated sculpt hides the joints beautifully, and the unique head sculpt turned out very nicely as well. If you are into collecting Star Wars figures from the Original Trilogy which haven't been made available before, then you'll want to pick Ekelarc Yong up. This is a cool looking figure for sure!