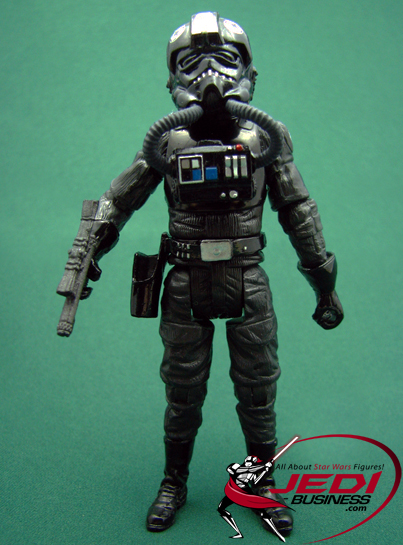 Tie Fighter pilot Lieutenant Oxixo was available in a Toys'R'Us exclusive 4-pack titled "Battle Over Endor (2 of 2)", and was released in January 2011 in the Shadow Of The Dark Side Collection. The set included Lieutenant Oxixo, Y-Wing pilot Ekelarc Yong, A-Wing pilot Sila Kott and astromech droid R5-P9. We weren't able to clearly identify Lieutenant Oxixo during the battle in The Return Of The Jedi, but a very similar looking helmet design with a silver Mohawk could be seen in ANH.

Lieutenant Oxixo is identical to Tie Fighter pilot Major Mianda, which was released in the first Battle Over Endor multipack, except for the helmet design, and a different blaster. The head sculpt, the paint app on the figure itself, including the chest box, is identical.

The pilot was given 12 points of articulation, with ball-joints in the neck, shoulders, elbows and knees. The forearms, the waist and both legs were given swivel joints. The ankles on this figure are not articulated, but it keeps the balance somewhat OK nonetheless. Hasbro included a generic imperial blaster and a Tie Fighter pilot helmet with attached chest box with the figure. The blaster fits well into the holster, and into both hands. The helmet fits also quite well over the head, and the chest box plugs in nicely into the hole in the chest. We still feel that the two belts on the figure need to be fixed, and that it doesn't look good on display when the figure doesn't wear the helmet, because there is a hole in the chest. Maybe a work-around this issue would be to include a removable chest-plate, one the figure can wear when the helmet is off, and one that can be put on when the helmet is on the figure.

The paint application on Lieutenant Oxixo is done OK. The pilot suit is kept in a black, non-glossy tone, while the armor pieces are kept in a glossy black. Aesthetically, Lieutenant Oxixo looks good with the helmet on, and if you are looking for more Tie Fighter pilots, then this figure is for you. However, it's not THE definite Tie Fighter pilot figure yet, and you might want to wait for a better version down the road. 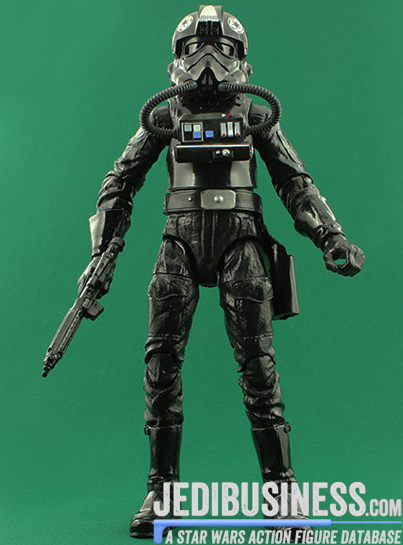