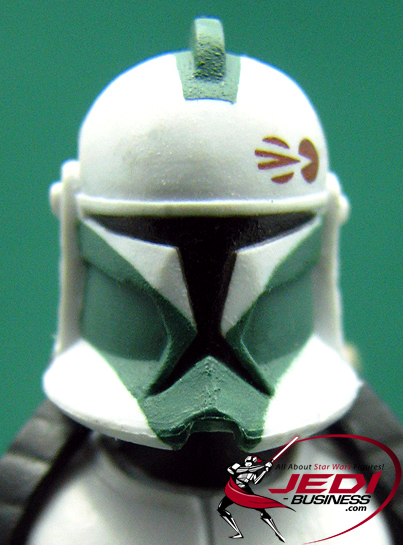 Animated-style Clone Trooper Draa was released individually carded during the Clone Wars Collection in November 2010. The character could be seen in the Clone Wars TV show's second season, in the episode called "Weapons Factory".

The trooper features 12 joints, including a ball-jointed neck, 2 ball-jointed shoulders, 2 ball-jointed elbows and 2 ball-jointed knees. The wrists, the waist and the hip are swivel jointed. The ankles are not articulated. Hasbro included a blaster, a blaster rifle, a backpack and a missile launcher with Draa. All the weapons are a good fit for both hands. Even the bigger missile launcher can be held by Draa quite well, but it might take a little longer to adjust the pose. The straps on the backpack fit well over the figure's shoulders and keep the backpack firmly in place. The clone trooper's helmet is not removable.

The paint application on Clone Trooper Draa seems to mimic the patterns seen on the character's armor from the TV show quite well. Unfortunately, there is no weathering or dirt to be found on Draa. The sculpt and overall appearance looks good, and even though we've seen clone troopers with more and better articulated joints, it's still a cool figure, well worth adding to the collection.

Clone trooper Draa fights battle droids on Geonosis. Draa is part of a Republic mission to destroy a Separatist droid factory. Under the command of Jedi General Luminara Unduli, Draa fights the droids with an arsenal of weapons including a blaster pistol, blaster rifle and missile launcher.