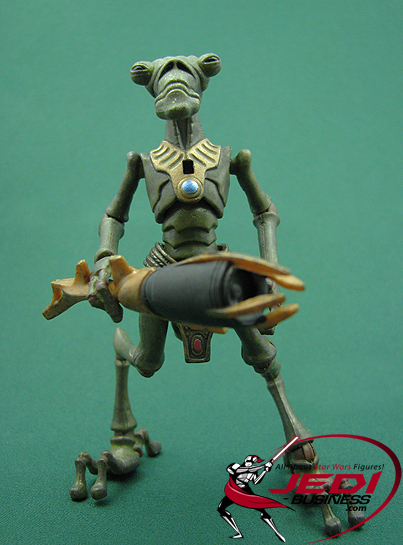 This Geonosian Drone was released in a 2-pack during the Clone Wars Collection as a Target exclusive in February/March 2011. The figure was packed-in together with the Special Ops Clone Trooper and is based on the Landing At Point Rain story arch from the second season of The Clone Wars.

The paint application on the Geonosian Drone is well applied with dark greens and subtle dirt on the figure's body. Aesthetically, the sculpt looks nice, but where Hasbro failed is by not including wings, the sting on the back and the spiky chest armor piece. This all wouldn't be such a big deal, if the figure's sculpt wouldn't have holes in it where these pieces need to go. Essentially, this figure is incomplete or can be considered broken. It's a different looking figure compared to the Undead Geonosian, but because of the missing pieces and the holes in the front and back of the figure which have no purpose, we can't recommend adding this figure to the collection.