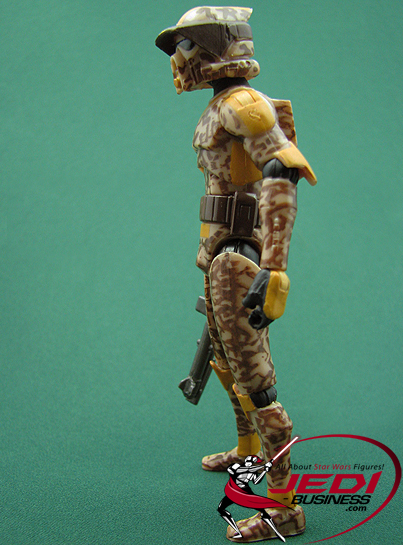 ARF Trooper Waxer was released in a 2-pack during the Clone Wars Collection as a Target exclusive in February/March 2011. The figure was packed-in together with a Battle Droid and is based on the Landing At Point Rain and Weapons Factory episodes from the second season of The Clone Wars.

Just like ARF Trooper Boil, Waxer features 14 points of articulation, with all the joints being ball-jointed, including the wrists, the waist and the hip. Waxer stands quite well by himself, unless he's displayed with the gatling-gun in his hands, which causes him to loose balance, and you'll need to use the included stand for additional stability. There were two weapons included with Waxer, a basic Clone Trooper blaster, and a gatling-type gun. The basic blaster is a good fit for both hands. The bigger gun can be placed well into Waxer's hands, but it'll take some patience to get it right. There is no head sculpt underneath the helmet, and there are no other removable pieces on the armor.

The paint application on ARF Trooper Waxer is nicely done and all the yellow markings seem to be in the correct spots. The ball-joint-only sculpt looks nice, with very well hidden joints and an overall very good likeness to the character from the TV show. All in all, ARF Trooper Waxer turned out nicely, and is a fine addition to any Clone Wars Collection!

If you like this figure, you might also want to take a look at Clone Trooper Waxer from 2009!

Clone troopers fight battle droids to destroy a Separatist weapons factory. ARF Trooper Waxer scouts ahead to gather information about the enemy. He runs into a squad of battle droids, and stops these robotic warriors before they reveal his position.