Here is a look at our favorite Hasbro Star Wars action figures from The Black Series 6" line in 2016:

The AT-AT Driver had been on fan's wishlists for a long time and in 2016 Hasbro finally released this figure in the 6" The Black Series. The character likeness is fantastic and the detailed paint application captures the look of the Imperial pilots perfectly! You know that you need to own at least two of those, right?

Rogue One featured a variety of new Imperial Troopers, but none of them stood out the way the tall and skinny Imperial Death Troopers did! Hasbro captured the look and the gear perfectly in their 6" rendition. We prefer the Target exclusive Specialist version over the regular figure because of the additional shoulder pauldron and grenades on the front of the figure! This trooper looks outstanding on display!

Hasbro's realistic 6" The Black Series version of Kanan Jarrus from the animated TV series Star Wars Rebels turned out beautifully. Most impressive is the lightsaber which can be broken apart into two pieces, this way Kanan can hide his Jedi identity by clipping one piece to the side of the belt and the main piece to the back. The head sculpt and the paint application on the figure are great as well!

This K-Mart exclusive Jyn Erso Black Series 6" figure is our favorite released Jyn Erso figure of 2016. Hasbro included a ton of accessories with the figure, including Jyn's baton, a removable helmet and a very cool looking "Eadu" base. Hasbro even improved upon the concept from last year by adding pegs to the base so Jyn can be secured to it better. This is a truly must-have-figure!

Hasbro's design team paid close attention to details found on the classic Snowtroopers while creating this figure. All the details which you'd like to see as a collector are represented in the figure, the off-white color on the outfit and the dirt/weathering on the boots looks great. It's even possible to move the head slightly (not easy to do with a helmet which goes down over the front and the back of the armor). Hasbro even included two different weapons with the Snowtrooper, so if you pick up more than one you can make them look different on display! 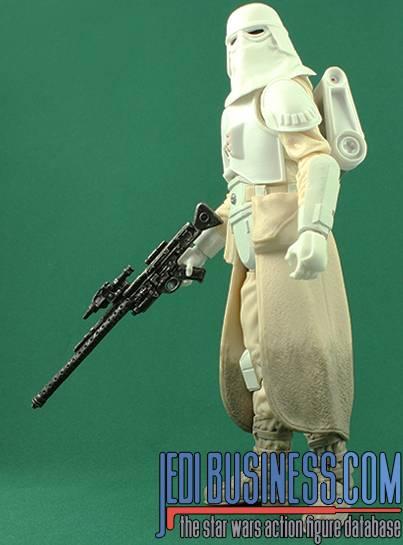 Not only is K-2SO one of the coolest new characters in Rogue One, but the figure is among the best released in Hasbro's 2016 Black Series 6" line. K-2SO is tall, just like he is supposed to be and the details and the look of the figure capture the likeness of the droid from Rogue One perfectly. There is subtle weathering around the joints and Hasbro incorporated see-through plastic components where necessary (very cool!). K-2SO is a fairly common figure on store shelves, but it certainly shouldn't miss in any serious Star Wars action figure collection.

The unmasked version of Kylo Ren is a beautiful demonstration of how well Hasbro's sculpting team can capture a person's likeness. The head sculpt is nicely detailed with all of Adam Driver's distinct facial features. We prefer the San Diego Comic Con version over the regular retail version because it was sold in a beautiful box together with Darth Vader's melted helmet and additional accessories not found in the basic version.

The Black Series 6" Ahsoka Tano action figure was first revealed by Hasbro during Star Wars Celebration Anaheim in 2015 and it finally made it onto store shelves in 2016. This realistic interpretation of an older, more mature looking Ahsoka Tano from Star Wars Rebels demonstrates impressively how accurately and beautifully Hasbro is able to paint and sculpt figures in the Black Series 6" line.

Just like Ahsoka Tano, this realistic rendition of Sabine Wren from Star Wars Rebels is a home run. The paint application alone is among the best we've seen in this scale so far and the details in the sculpt look outstanding.

Our favorite The Black Series 6" figure this year is Obi-Wan (Ben) Kenobi, which was a San Diego Comic Con exclusive. It's very tough to get soft-goods right, but in this case even the hood can be placed over the head in a way that it looks great. The head sculpt turned out nicely and the color tones on the outfit appear to match the costume from the movie very well. The lightsaber hilt is nicely detailed, it even has the D-ring on the end located on the side, which is a nice added detail most fans probably won't even notice. The electronic table features a light-up holographic Princess Leia and it plays her message to Obi-Wan Kenobi. The message is not just a simple recording from the movie, but a cleaned-up version without any background noise. The packaging is very collector friendly and looks great, it can be display opened or closed. All in all, the figure, the packaging, the accessories, it all comes together beautifully and that's why the Black Series 6" Obi-Wan (Ben) Kenobi is our favorite figure of 2016!