Ryan Beise, our JediBusiness.com correspondent during San Diego Comic Con 2017, met the Hasbro Star Wars brand team and asked your questions to Joe Ninivaggi and Steve Evans. Below is a transcript of the conversation. We'll publish the audio of the conversation at a later date on Toy Run - The Star Wars Action Figure Cast.

Q: Will the 3.75" The Vintage Collection be the main line or will it be a subline like the 40th Anniversary Titanium figures?

A: Do you mean would it be available at all retailers, or will it be the main focus?

Q: Will it be running side by side with the 5POA figures?

Q: The Vintage Collection will include beasts and larger vehicles, we saw the tank and the Rathtar during the panel today. Will we continue to see vehicles and creatures?

A: The Rathtar is actually part of the 5POA collection, but yes, vehicles, creatures, everything that's normally vintage (modern vintage-style), we are looking at it all.

Q: The Wampa that we saw today, how come that it's highly articulated and the Luke figure which comes with it is only 5POA?

A: We did some research and the kids loved the Wampa. So when we look at that, and the amount of stuff that it needs (and we know we have a higher price point, because it's not a $7.99 figure, it's a 2-pack), we can add articulation and keep it within the price point.

Q: Will the Expanded Universe Comic 2-packs return in the 3.75" scale? We have seen those done in Marvel already.

A: It's always a possibility but there are no plans in the near future.

Q: With the Vintage Collection coming back, will the mail-away figures return?

A: We could do it, but there are no plans for it currently. It's kind of an element of The Vintage Collection and it would be fun to do it.

Q: What will a The Vintage Collection figure cost?

Q: How much of the Vintage Collection will be new vs. repacks?

A: We announced today during the panel that we'll re-issue hard-to-get figures, not just from the previous The Vintage Collection but also the Legacy Collection (like the Hoth Rebel trooper). We want this to be an on-going discussion with the fans.

Q: I think I can say this on behalf of everybody, can we get a 3.75" Vintage Collection Luke Skywalker (Jedi Master)? I am sure everybody has been asking about this one.

A: Absolutely (laughs), noted. I have it in my little book.

Q: The Vintage Collection, will we see Star Wars Rebels and The Clone Wars figures in this line?

A: Could be. In the end of the day we know who the audience is for the Vintage Collection. If something bubbles to the surface, then we'll do it. I am not going to promise that we'll do 60 figures a year, but we want to show that we are listening and that we are willing and that we want to do things for you. We have received a few questions about Rebels and The Clone Wars today already, so it would be cool to do some figures.

A: We are still a few years away from the anniversary of Return Of The Jedi ... it's a good idea and we'll get there eventually.

Q: Is the Force Awakens Han Solo from The Black Series 6" line still being released with grey hair?

A: Long story short, we released him with brown hair. We realized that that shouldn't be the way we do it, so we went back and made Han Solo's hair grey. We looked at it and approved it. So if this figure would ever be re-ordered/repackaged it would come out with grey hair. I don't even know if there are any out there. We had some in. Technically it shipped, just in very low quantity, so we need to get it back out. That's definitely one which we need to get packed in again in future cases.

A: We are talking a lot about the prequels and we're seeing a big resurgence, especially recently in the last 6 months. The prequels are cool now. The 11 or 12 year olds from back then are now older, some have become collectors and have disposable income. We'll definitely put some prequel figures back into The Black Series 6" line, we want to represent everything.

Q: Will you release accessory packs for The Black Series 6" line with soft-goods jedi robes, weapons, prop diorama pieces? We see a lot of cool stuff here and we've heard a lot of people say that they would love to have stuff like that.

A: I like that idea, but we have no plans currently. What we are trying to do is to include extra pieces where we can with more exclusive items (like with Thrawn here at SDCC), so we are experimenting with a few things like that. I am recognizing the importance of props for building out The Black Series on the shelves so stay tuned.

Q: Will we still get a release of the Shoretrooper/Bistan 2-pack? It's on display here but we have not found it on store shelves yet.

A: That's a tricky one. We revealed that, but weren't able to get it out. We definitely want to get it out. It's obviously been produced. As of right now, we can't get it out immediately, but it's definitely going to come out in the near future.

Q: With so much Star Wars media out there and a new movie each year, we know it's tricky for Hasbro to satisfy demand across the board. Have you looked into dedicated lines for the Expanded Universe, or maybe a dedicated figure line for Star Wars video game characters?

A: I don't think we would do a dedicated line like that, we'll continue to do our lines and mix the different entertainment throughout. Will we satisfy every demand? It's impossible. These films and this universe is so deep, we are still trying to get figures out from a movie from 1977. But just keep the input coming, if we hear something, a loud enough call for something, we'll definitely take it into consideration.

Q: Starkiller in the Black Series 6" poll made it very far, what are the chances of this figure being released?

A: Pretty low. If he wins a fan poll in the future, but the old EU is difficult to do otherwise in the regular process.

A: He did get released. He was packed one per case, so we'll look into that. We are well aware of that and we've heard the complaints.

A: Nothing to announce at the moment.

Q: Given the timeframe of each movie shortening with the Han Solo movie coming out in May 2018, how will this impact the Last Jedi toy line?

A: You will have to wait and see but we have a lot in store for Han Solo.

Q: Is the Black Series 6" Centerpiece line an on-going line or is it a quick release type-thing?

A: It is an on-going line. Everyting is a little bit of an experiment, we react to reserach. If it's popular we will carry on, if it's not we'll try something else. We got some more designs in the works which look cool and we hope you'll like it.

We'd like to say thank you to Joe Ninivaggi and Steve Evans for taking their time to answer our reader's questions today. The Hasbro panel was likely one of the best panels in the past 5 years. THANK YOU!

We also would like to say thank you to everybody who submitted questions. Unfortunately it's impossible to ask them all in a 10 minute time frame, but we'll do this again in the future! THANK YOU! 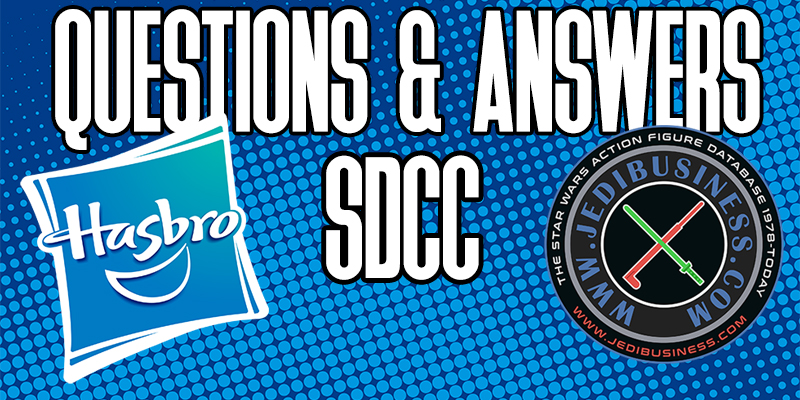