Here is a look at the brand new Poe Dameron's X-Wing Fighter from Hasbro's The Vintage Collection. The vehicle, which is in-scale with Hasbro's 3.75" Star Wars action figure line, was released on Triple Force Friday, October 4, 2019. The X-Wing Fighter cost $99.99 in the United States and at the time of its release could only be found on shelves at Barnes'N'Noble stores, it was however widely available online through many different e-tailers (check here if Amazon or Entertainment Earth have it in-stock currently (via affiliate link)).

Poe Dameron's X-Wing Fighter reviewed here was provided for free by Hasbro, but the editorial content was not influenced because of it.

The vintage-inspired Kenner packaging looks beautiful and features the X-Wing Fighter along with Poe Dameron, Chewbacca, C-3PO, BB-8 and Rey. There were however no Star Wars figures included in the box. 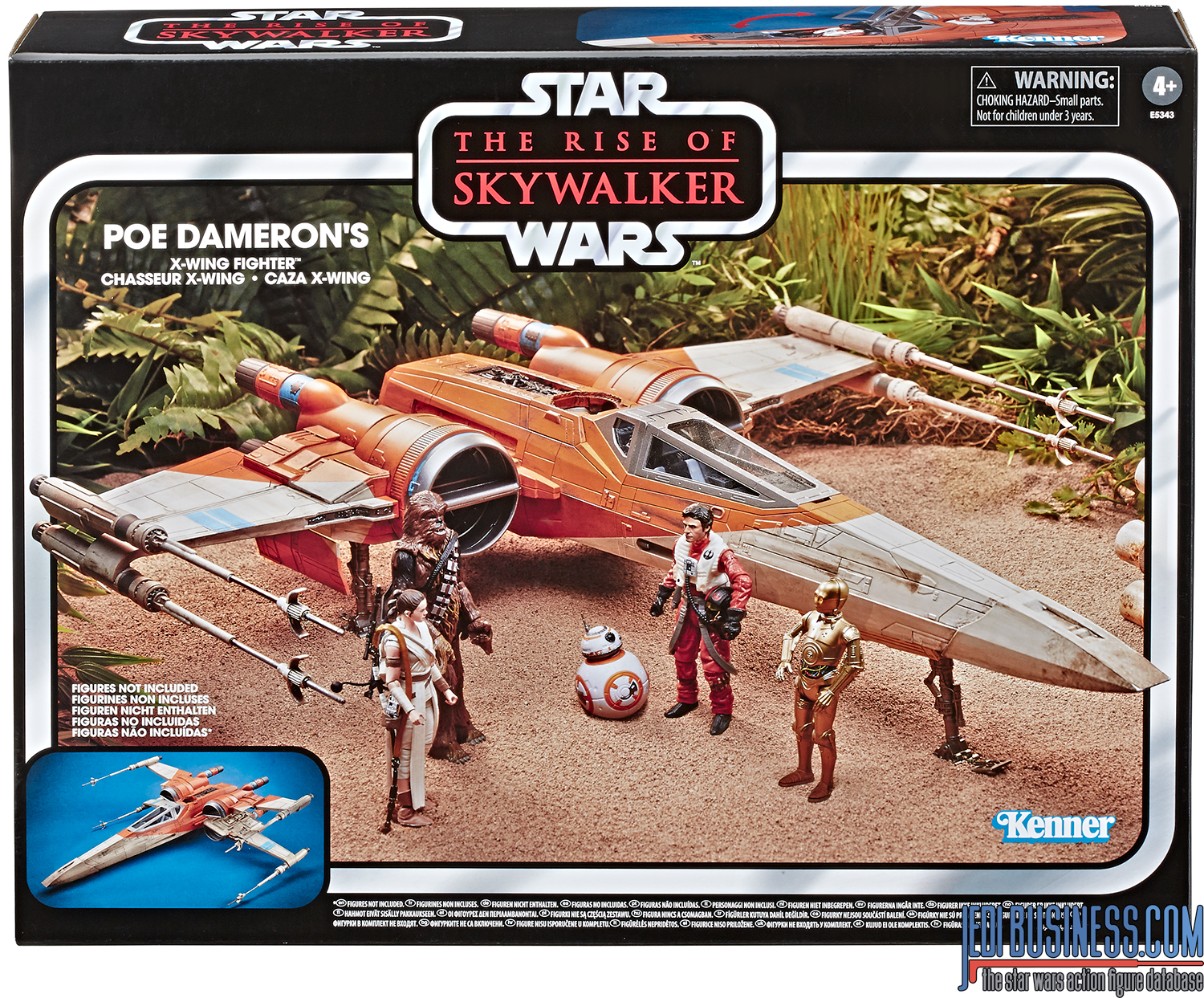 Hasbro sold a single carded Poe Dameron figure separately at the time of the X-Wing Fighter's release in The Vintage Collection. This way you could get the vehicle and the pilot at the same time. Below is a look at the figure, and you can find the database entry here.

Here is a look at the opened box and its contents. 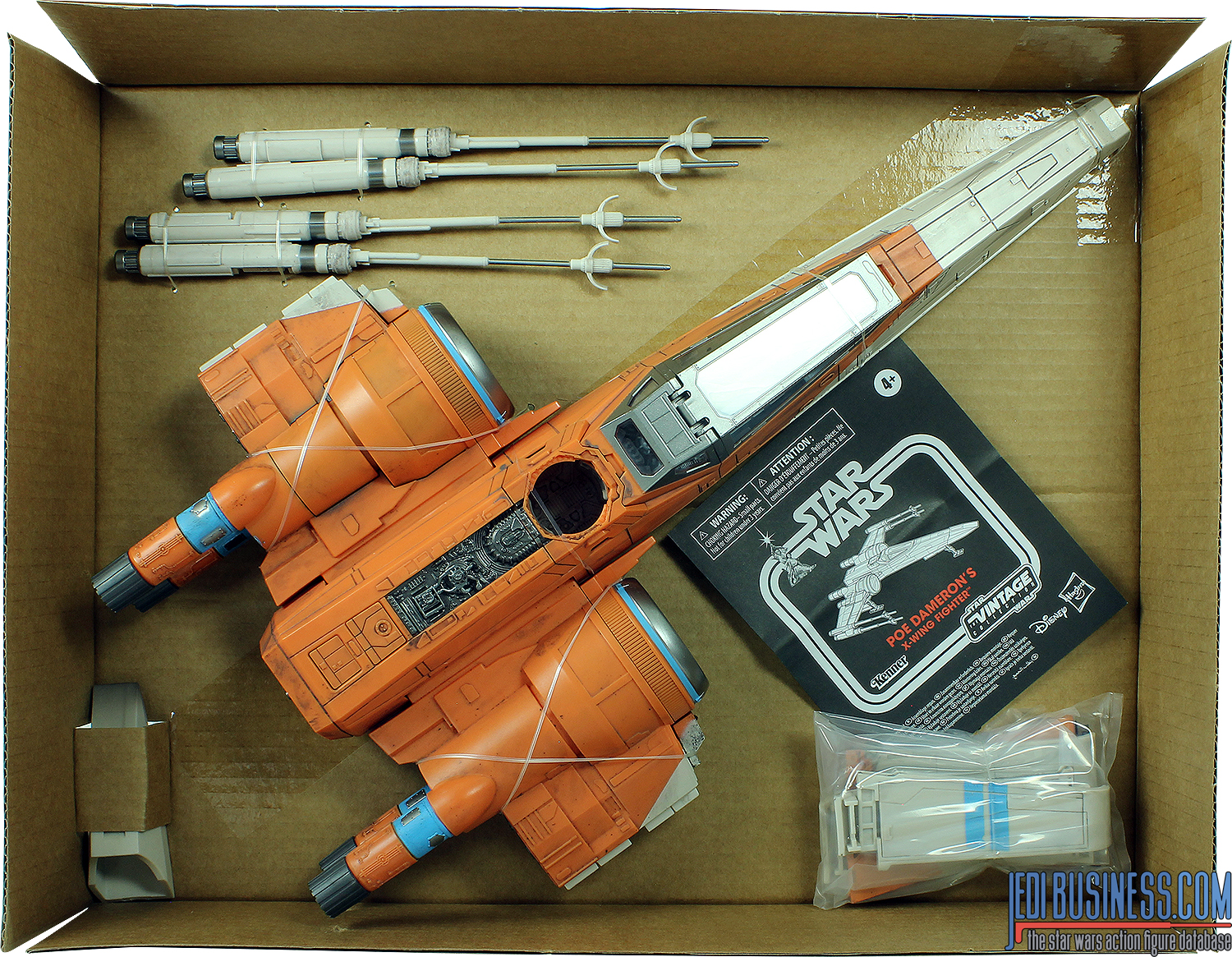 It's easy to assemble the X-Wing Fighter. Simply attach all 4 wings, all 4 laser cannons, the nose and the 3 landing gears to the vehicle. 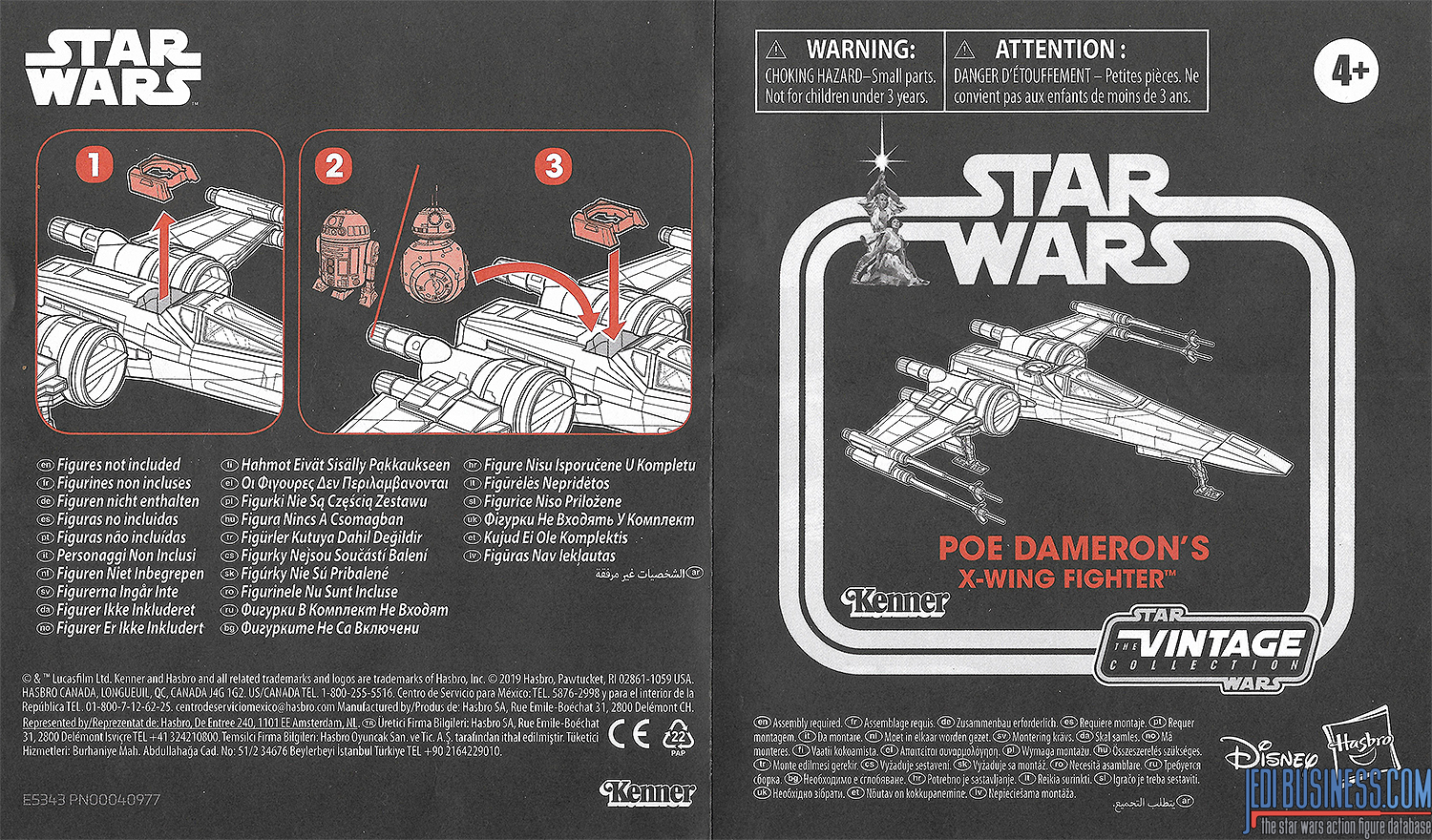 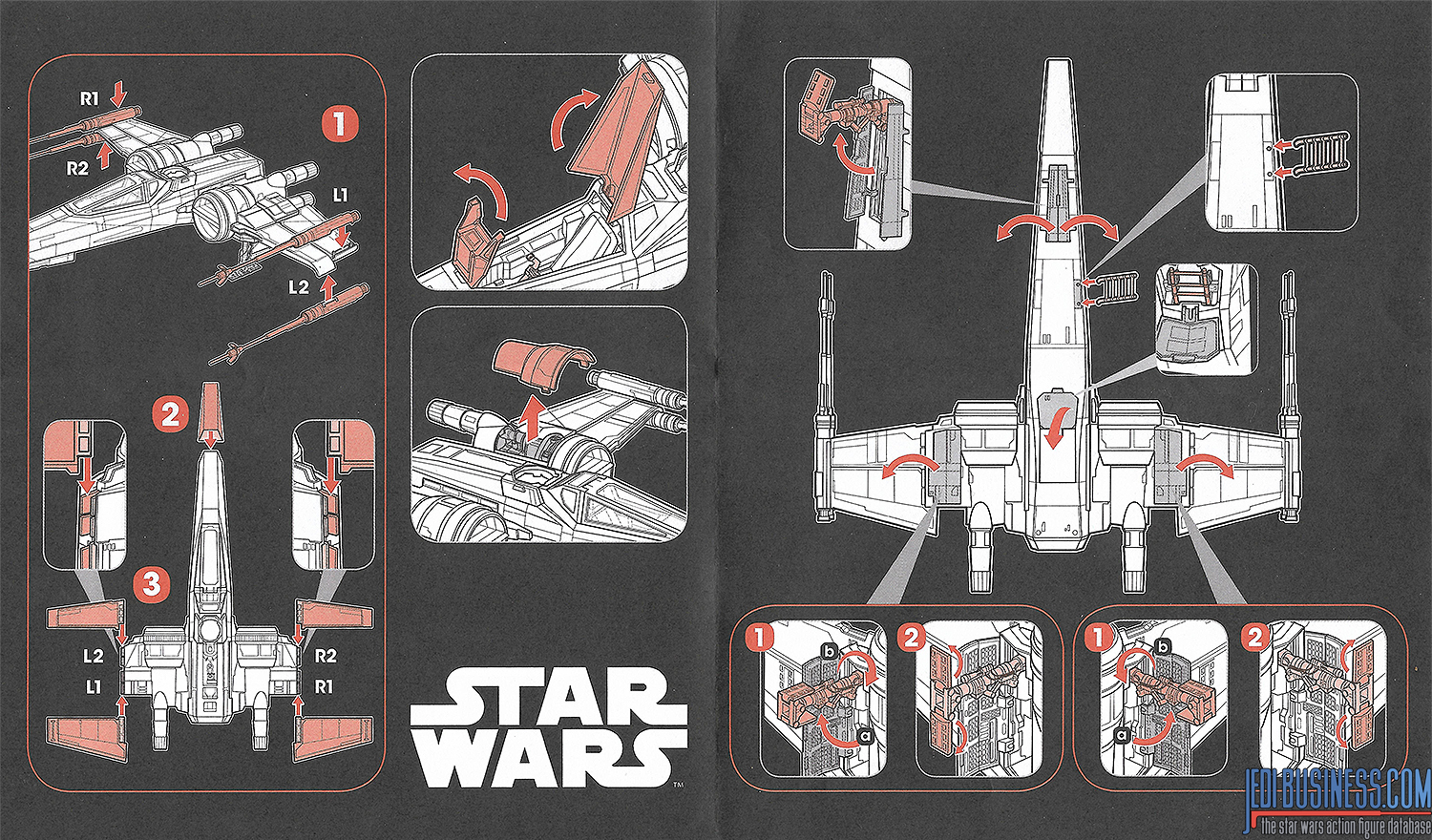 Assembling the X-Wing Fighter was fast, it took less than 5 minutes.

One thing which stood out right away is the paint application on the vehicle, there is a subtle wash applied on the top, bottom and in-between the wings. The weight also stood out and gives it a premium feel when you hold it up in the air. 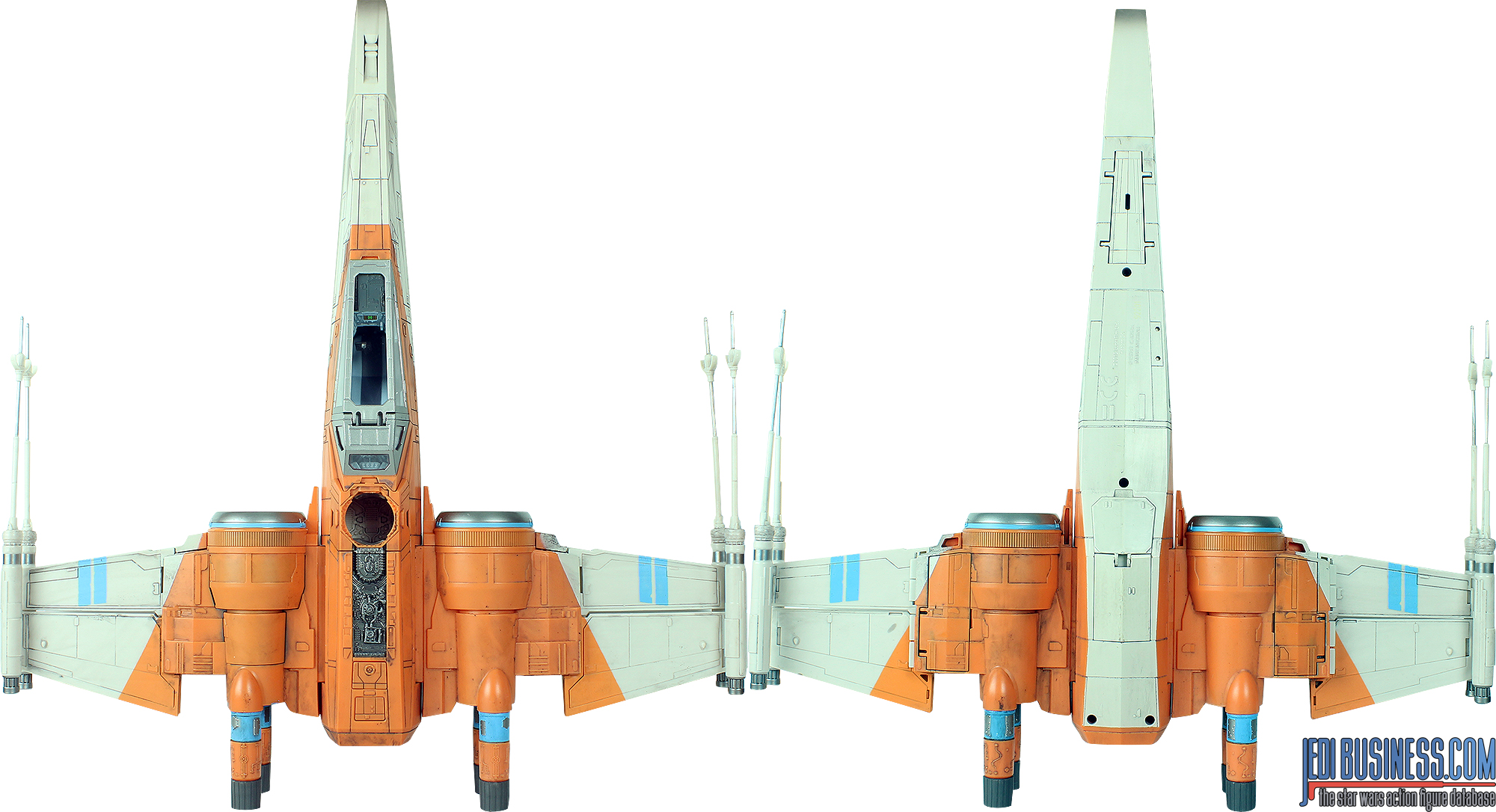 There are no sounds or electronics built into the vehicle, but there are two well hidden buttons on the back behind the droid socket, one locks the S-Foils in attack position, the other one closes the wings again. When the wings are open they stay open wide and don't sag down. 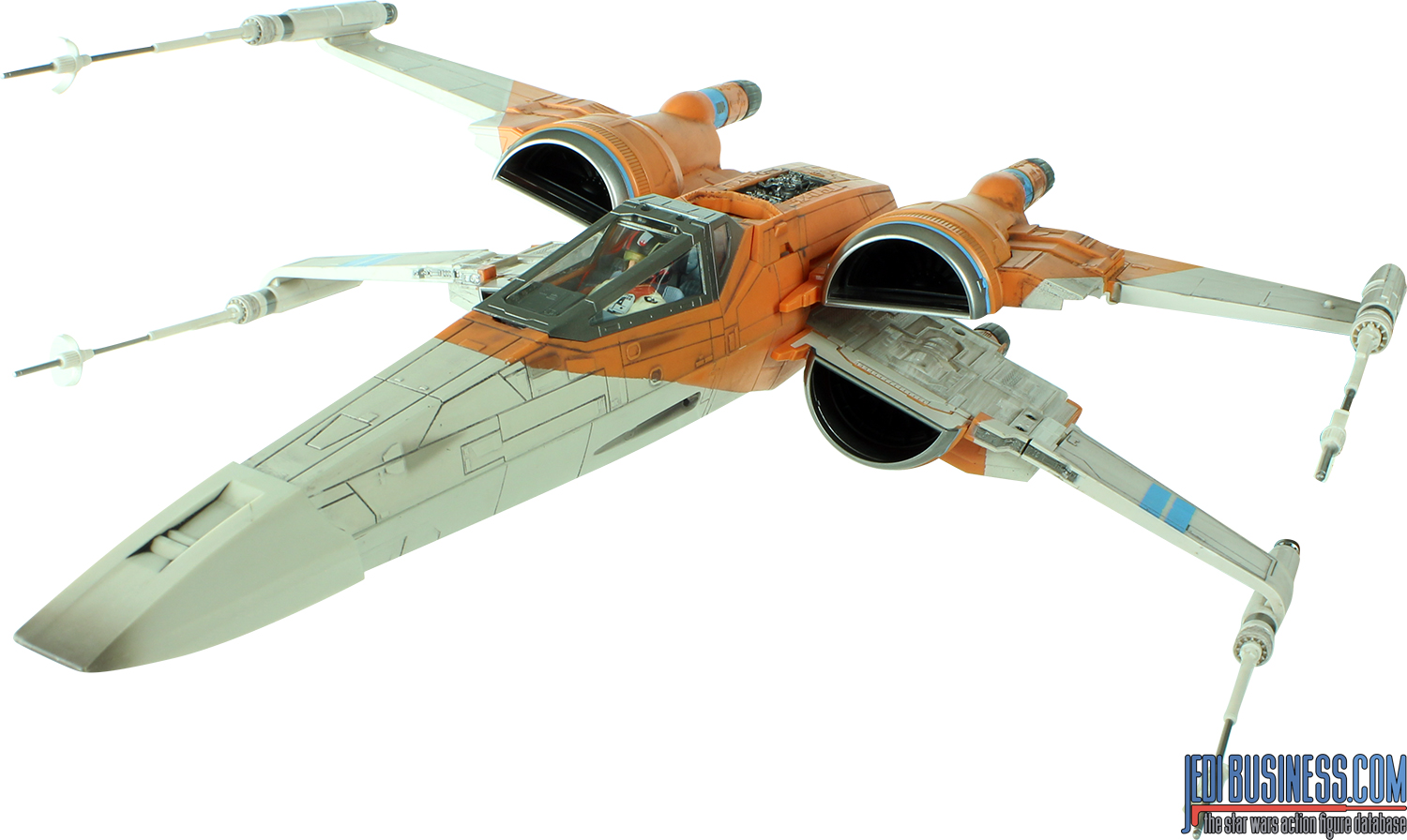 The cockipt canopy can manually be opened and once it's open you can pull the X-Wing dashboard up, this gives you more room for your fingers to place the figure into the cockpit properly. There is plenty of room for Poe to sit comfortably in the cockpit and grab the X-Wing controls. The dashboard is nicely detailed and there is a TIE Fighter flying right into Poe's range finder! Luckily there are no stickers which need to be applied. 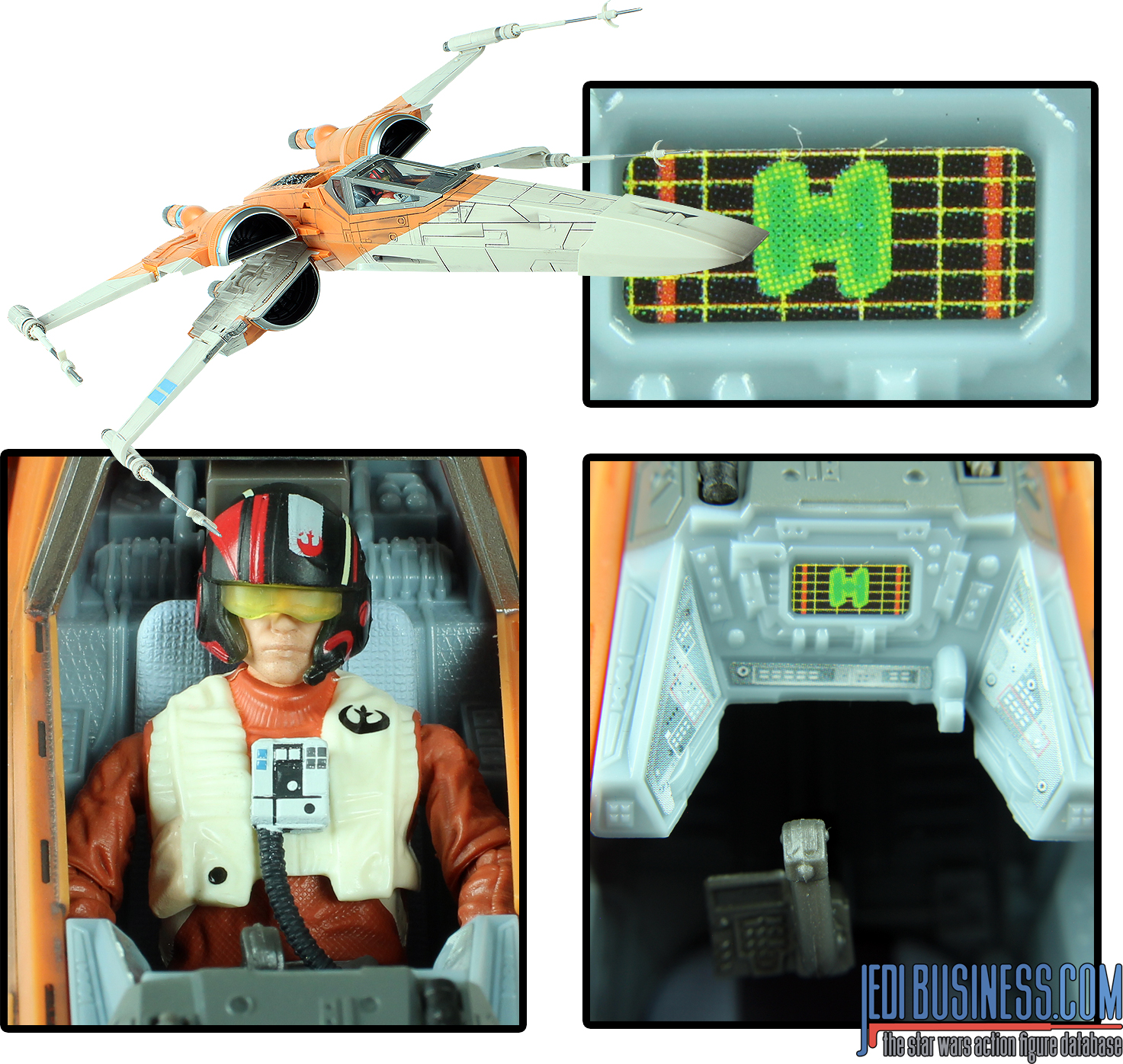 The droid socket in the back has room for either a regular astromech droid or a BB-Unit. If you want to place a BB-Unit into the socket simply lift the socket panel up which adds more room to place a ball-shaped droid inside.

The landing gear can manually be pulled out, this works well and keeps the X-Wing Fighter standing-up nicely. There is a panel on the top left wing which can be opened to reveal the engine underneath (cool!). One of the coolest features is the hatch on the bottom of the X-Wing Fighter which houses a ladder, it can be taken out and it's possible to pose Poe Dameron climing into the cockpit. 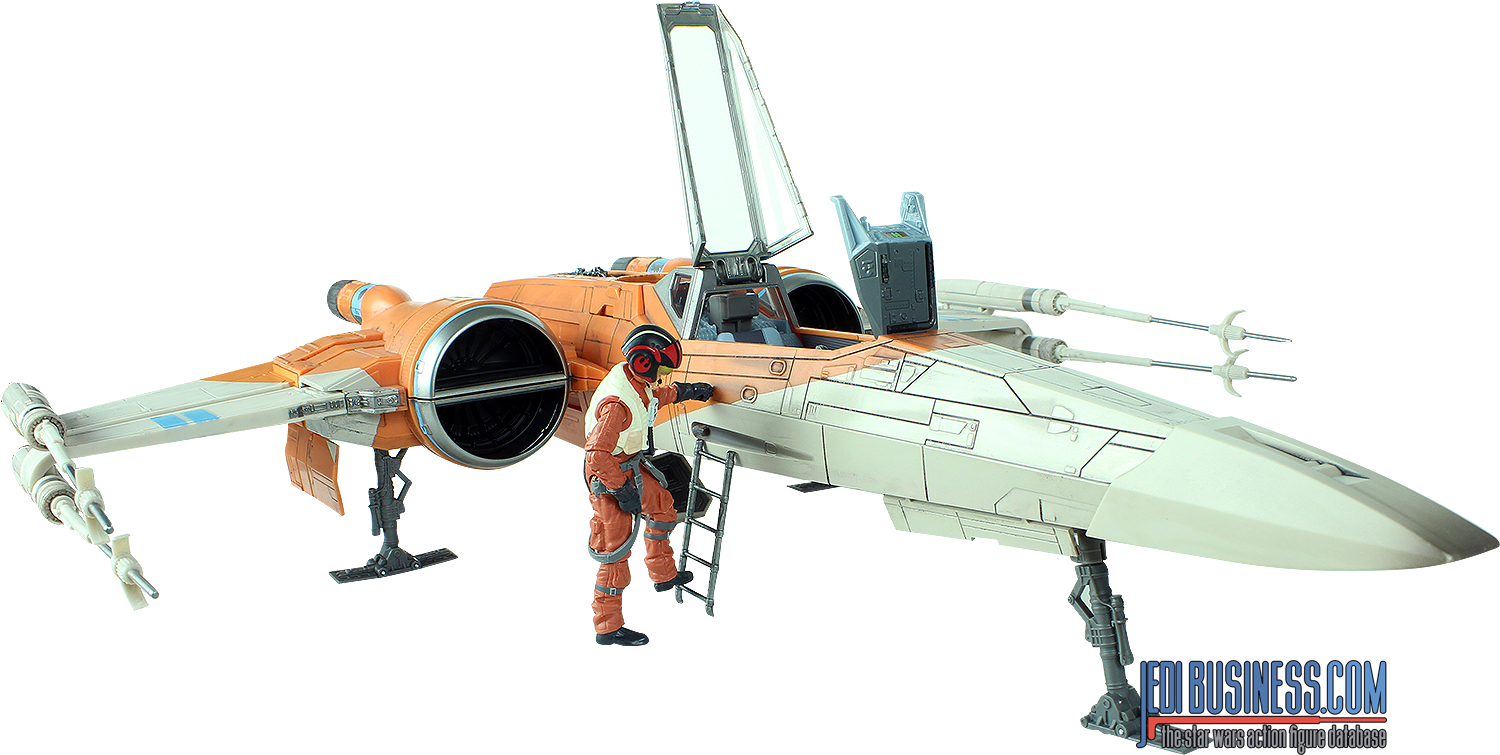 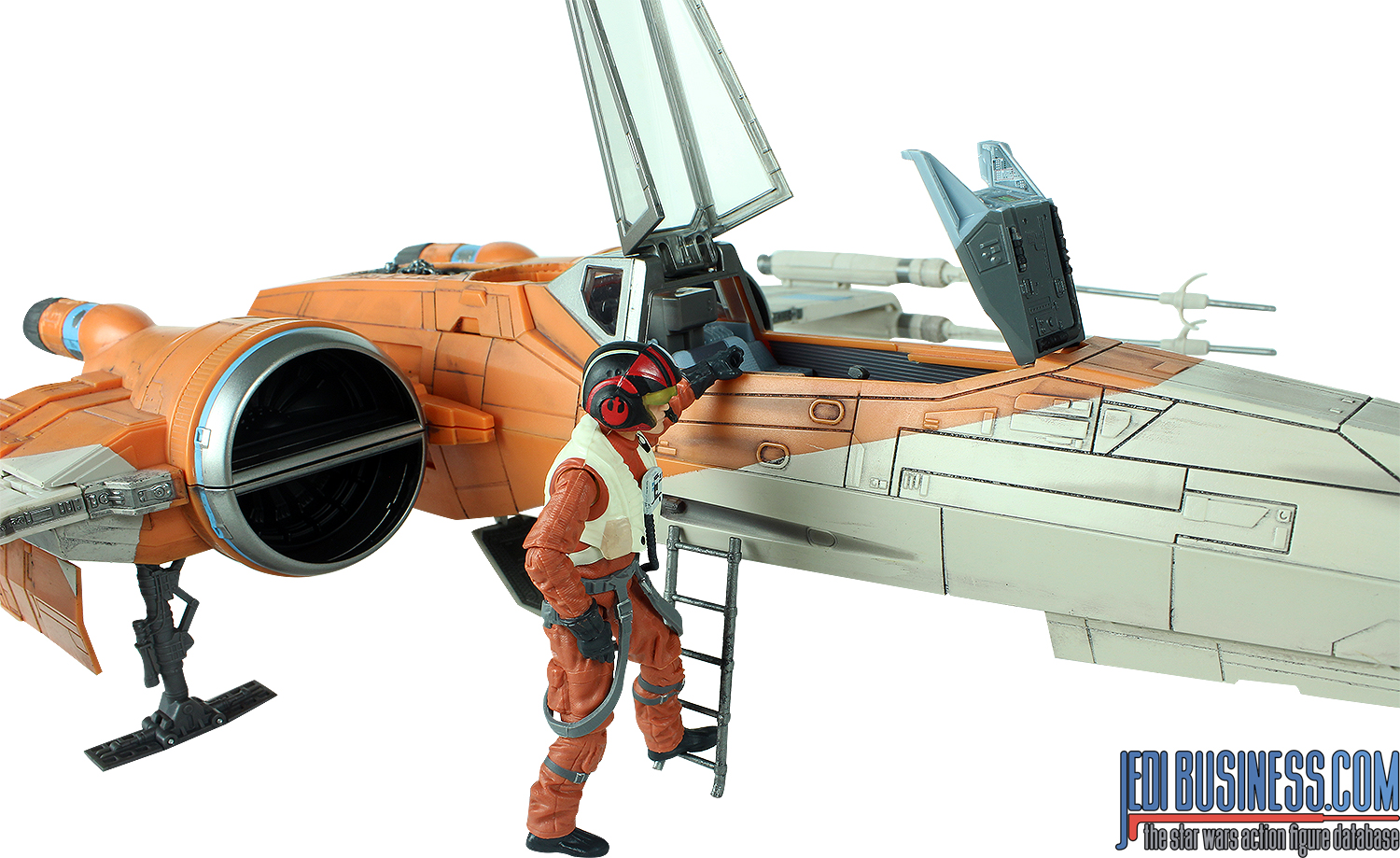 The engine details on the top of Poe Dameron's X-Wing Fighter and on the back look outstanding, and the paint application in particular looks fantastic here. 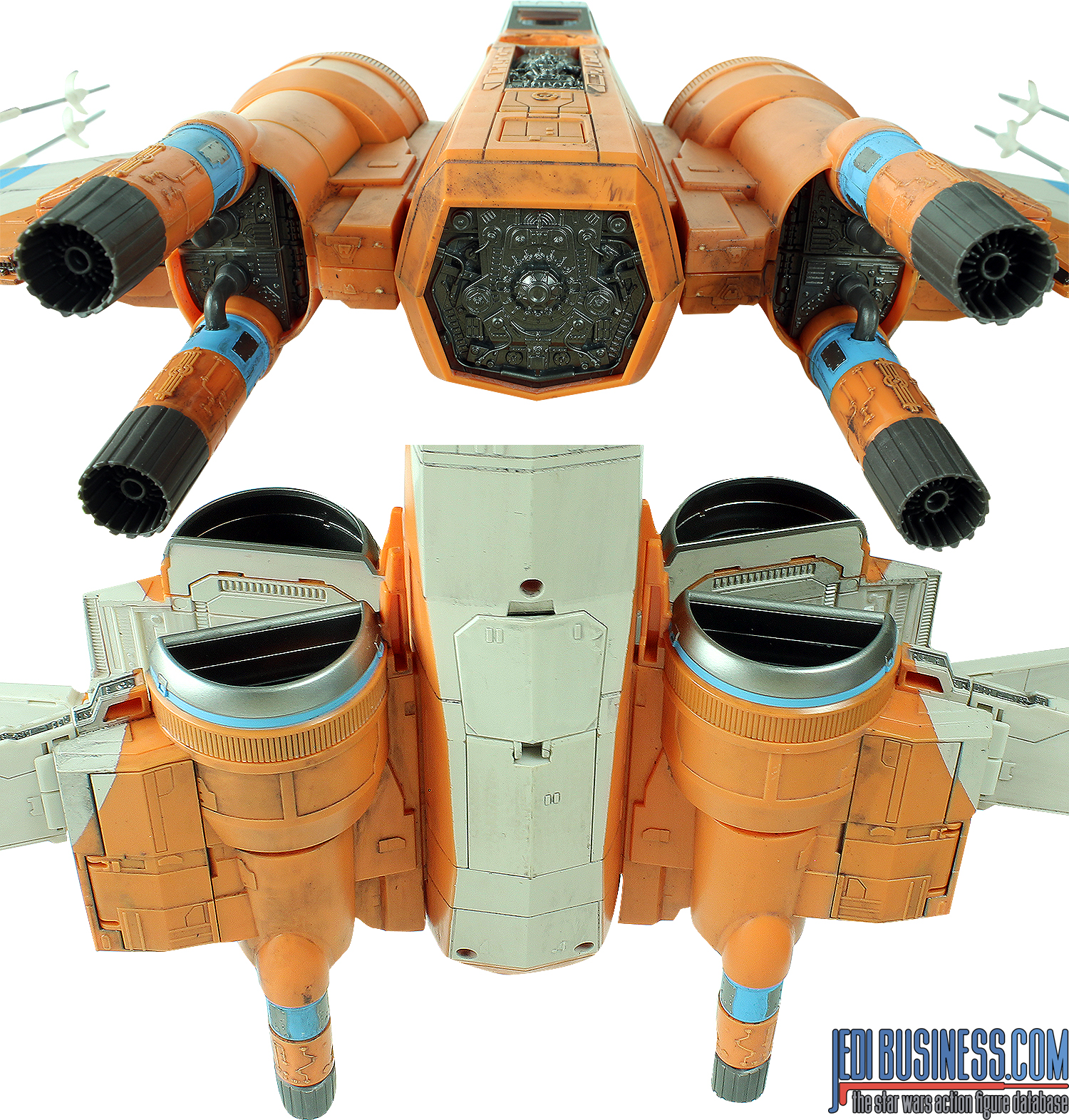 The pictures speak for themselves, Poe Dameron's X-Wing Fighter from Hasbro's The Vintage Collection turned out beautifully. It feels premium when you hold it up and display it, and it's functional with non-sagging wings, working landing gear and a cockpit which has enough room to sit a figure comfortably. The hidden hatch underneath which stores the ladder and the removable panel for the engine are nice added details. The paint application was well applied too. So all in all, this is a great vehicle all around!

Where to go next?