A Closer Look At The Vintage Collection Carbon Freezing Chamber

Hasbro released the Vintage Collection Carbon Freezing Chamber playset in September 2020 for $49.99 through the Fan Channel (which currently means online only at several different online retailers). The only retailer in the United States which had this set on store shelves at the time of this review was Best Buy. The set came bundled together with a Han Solo in Carbonite Block (packed in a plastic baggie) and a single carded Vintage Collection Stormtrooper figure. The Vintage Collection Carbon Freezing Chamber was part of Hasbro's 40th anniversary celebration of the Empire Strikes Back.

If you prefer to get your packaging in mint condition make sure to check out Entertainment Earth to see if they still have the Carbon Freezing Chamber playset in-stock.

The packaging design of the box looks great with several figures lined-up around the playset, the Kenner logo on the bottom, the vintage Empire Strikes Back logo on the top and several side panels with additional pictures of the playset. Sadly, Princess Leia is missing from the box art. 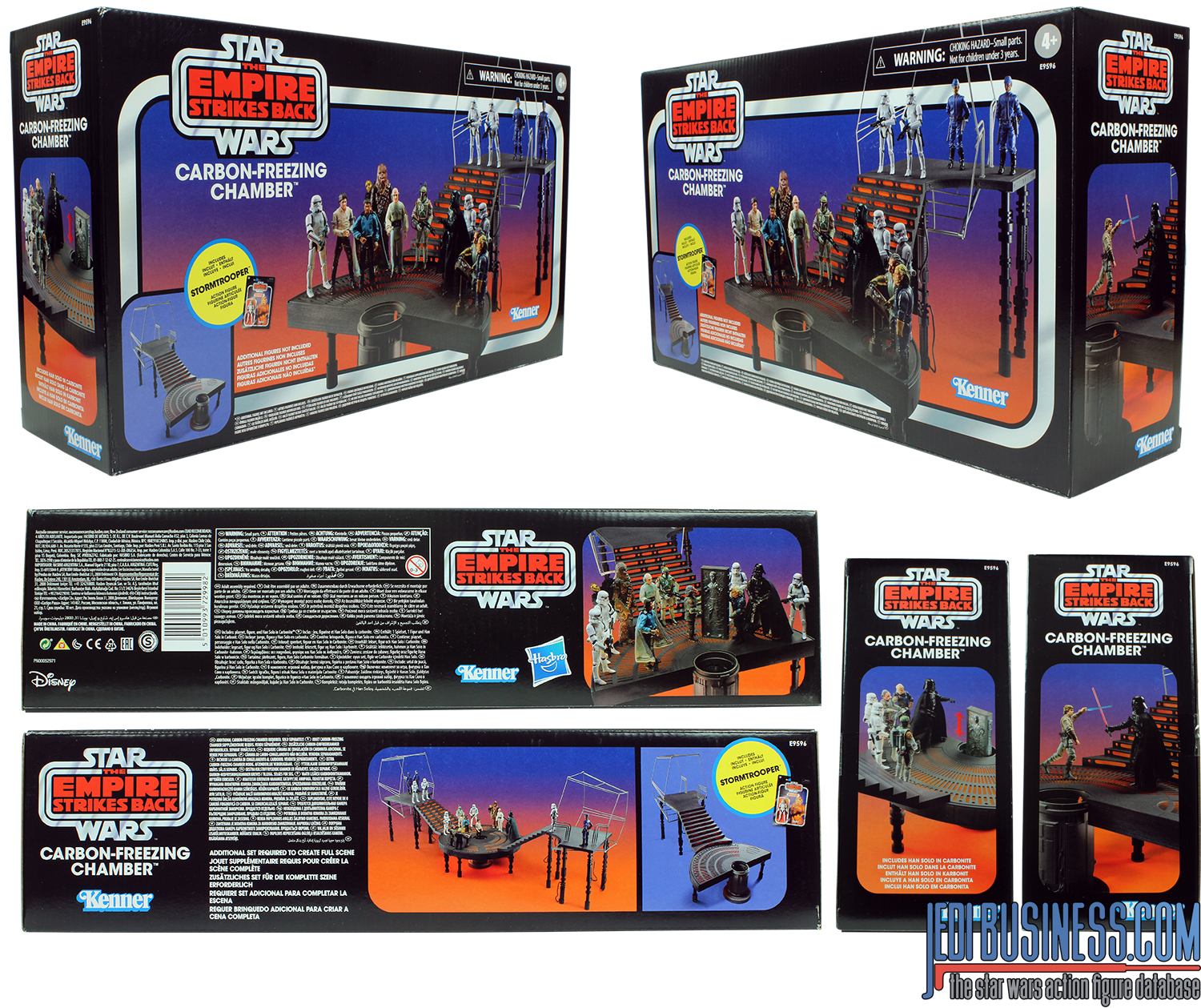 Unfortunately, the exclusive single carded Vintage Collection Stormtrooper which is part of this set was only tossed into the box without being secured, which resulted in damage to the card. This figure will be difficult to find mint on card because it's impossible to know in what condition it is in without opening the playset first. 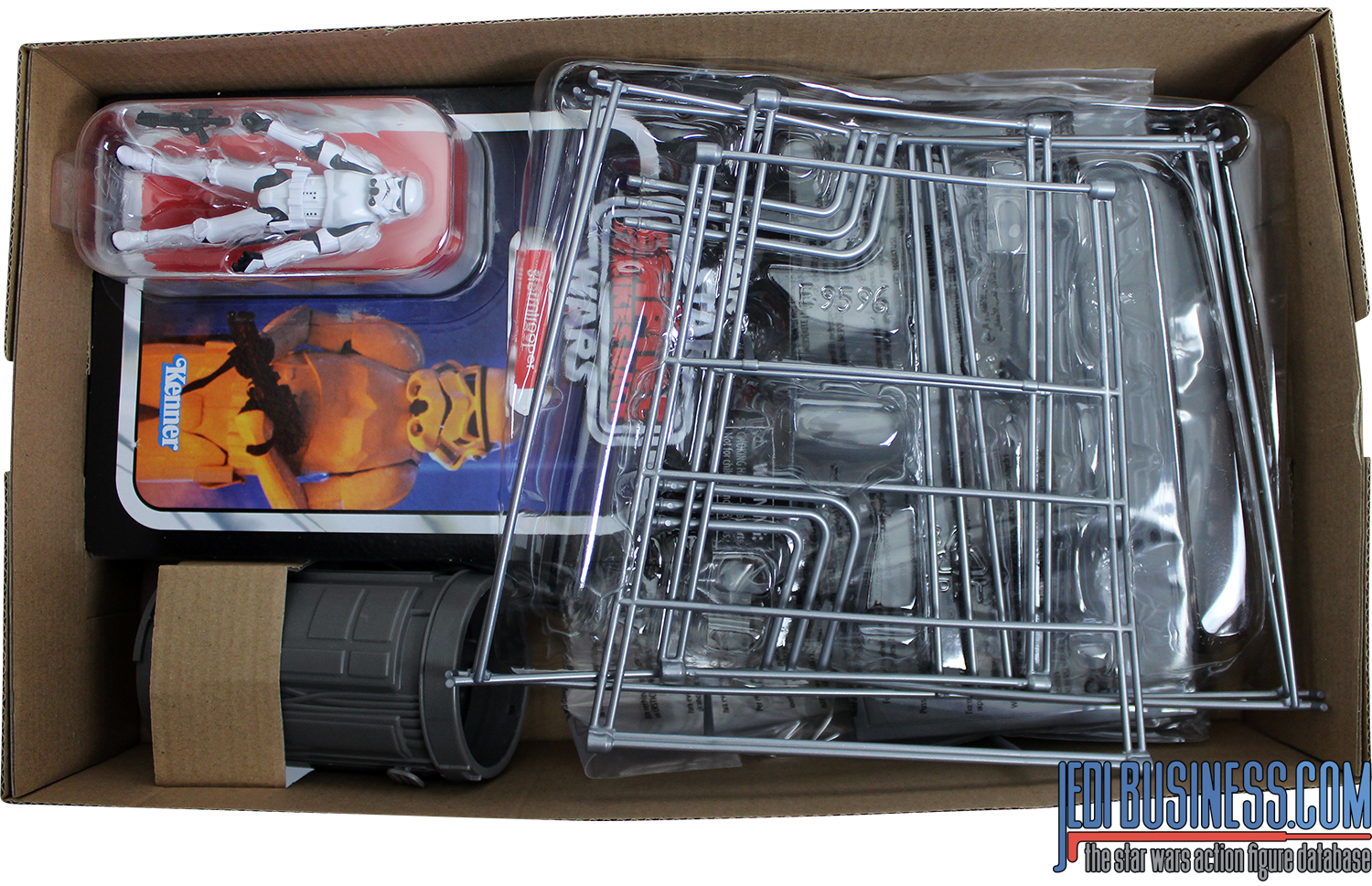 The assembly is fairly quick and will take about 10 minutes. If you assemble a second one it'll go quicker, and in order to set up two Carbon Freezing Chamber playsets next to each other, it'll take roughly 15 minutes total. The instructions are easy to follow. 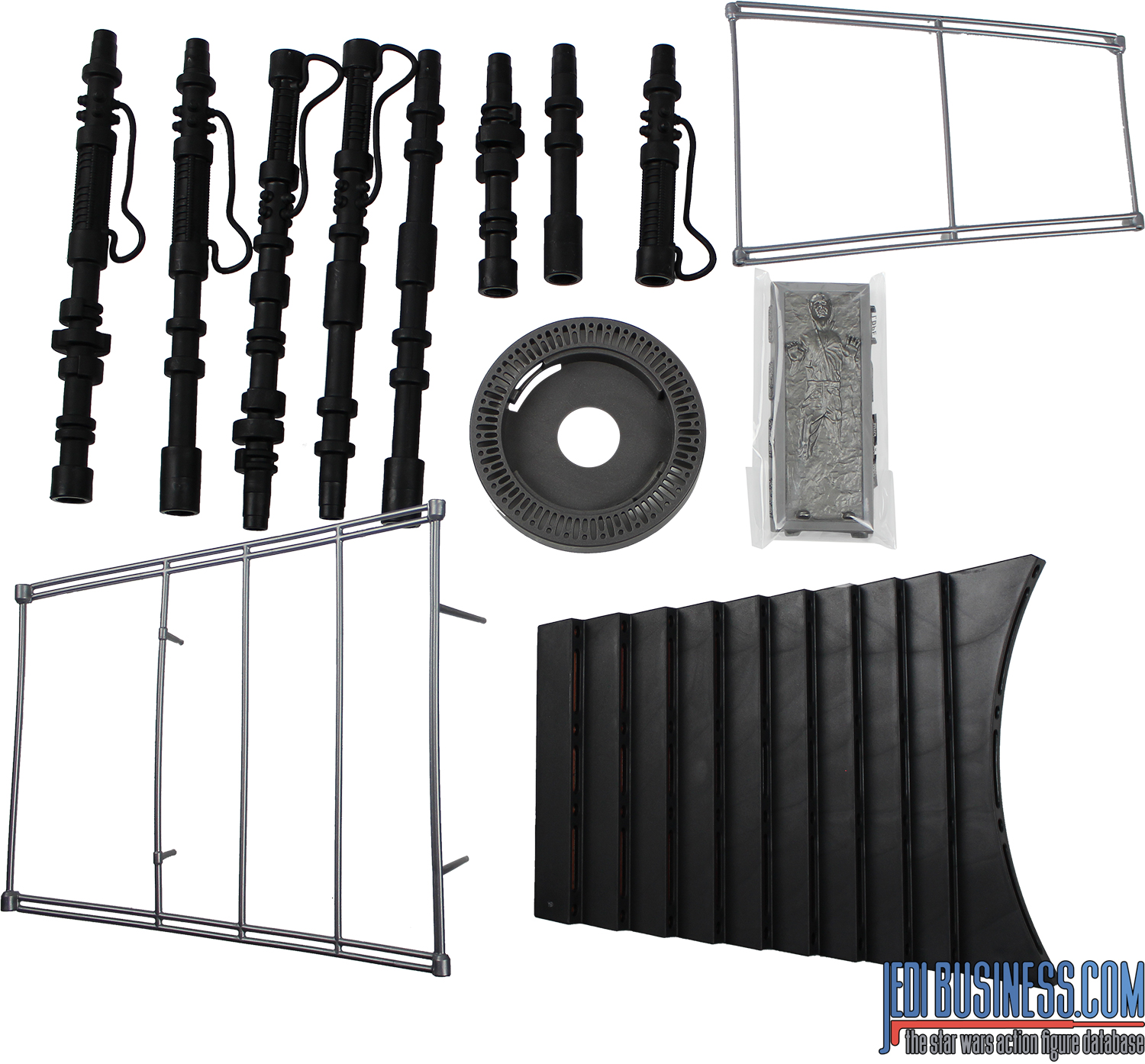 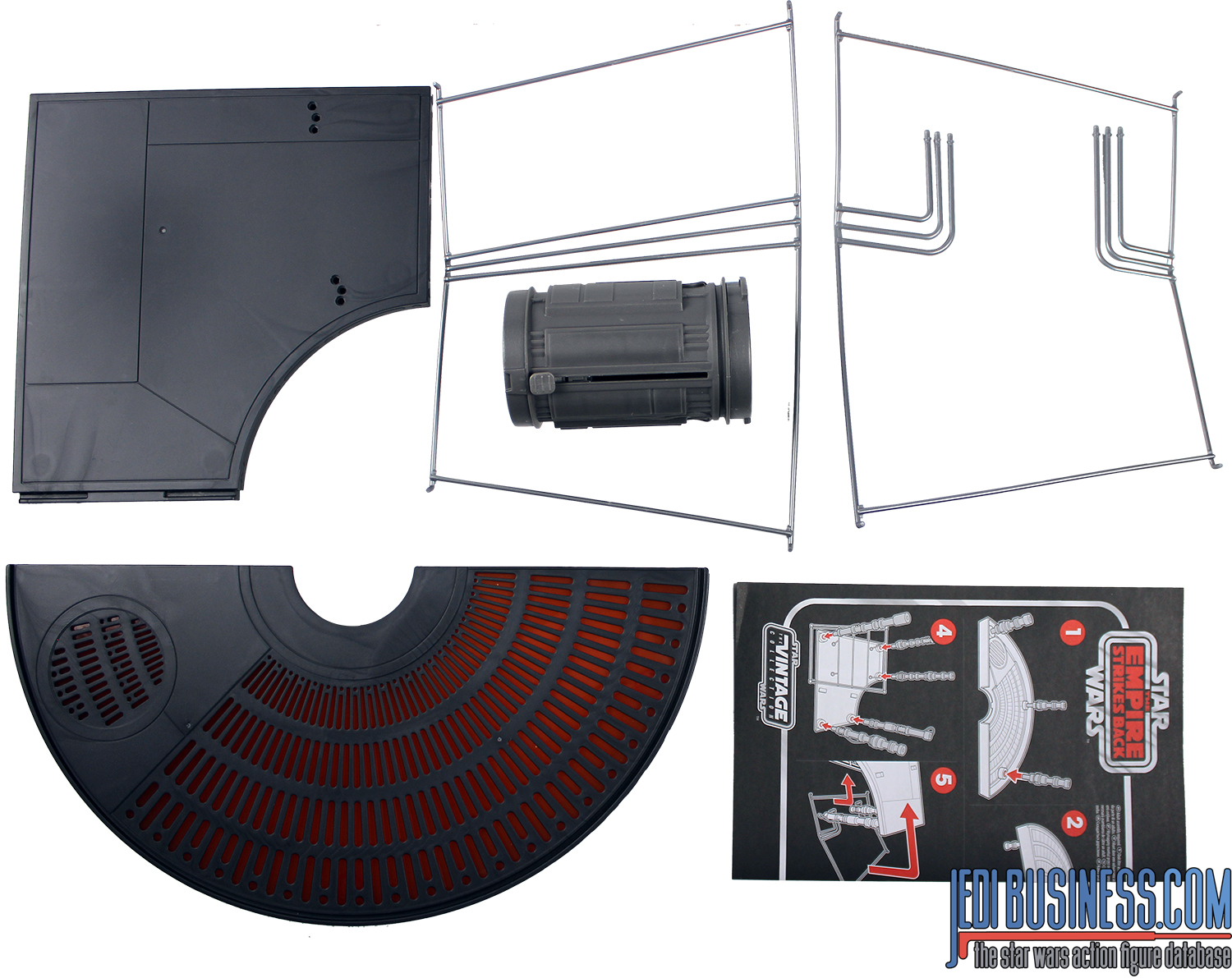 As you can see above, with one playset you will get half of the set up for the Carbon Freezing Chamber. You'll have to purchase a second one in order to have a full set up with a complete circle in the middle.

Below is a closer look at the super articulated single carded Vintage Collection Stormtrooper figure on an Empire Strikes Back card. It's a great looking card art and an awesome figure with a high glossy finish on the armor. When you look closer at the card however you'll notice white spots on it, that's not lint or dust, that's the damage the card had because the plastic parts inside the box rubbed against it during transit. There was also a small strange red spot printed onto the card below the name pill. 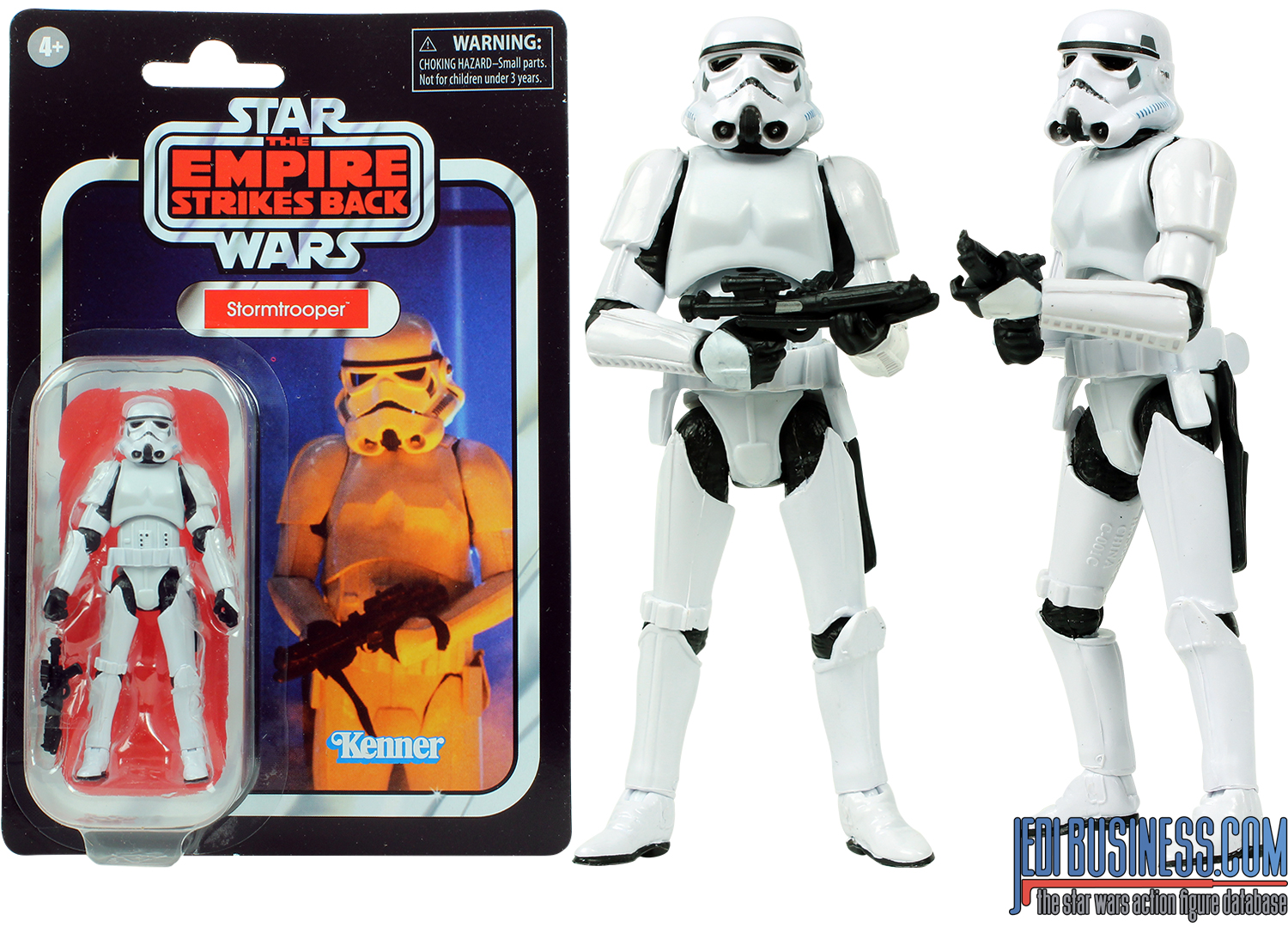 The Vintage Collection Carbon Freezing Chamber is rather big, one set is about 21" long, so if you are going the full width with two playsets you are looking at roughly 42" in length. It is possible however to position the staircases closer together, which will reduce the length. Two half circles together alone measure about 13" wide, which unfortunately is too wide to display them inside a Billy bookcase from Ikea. 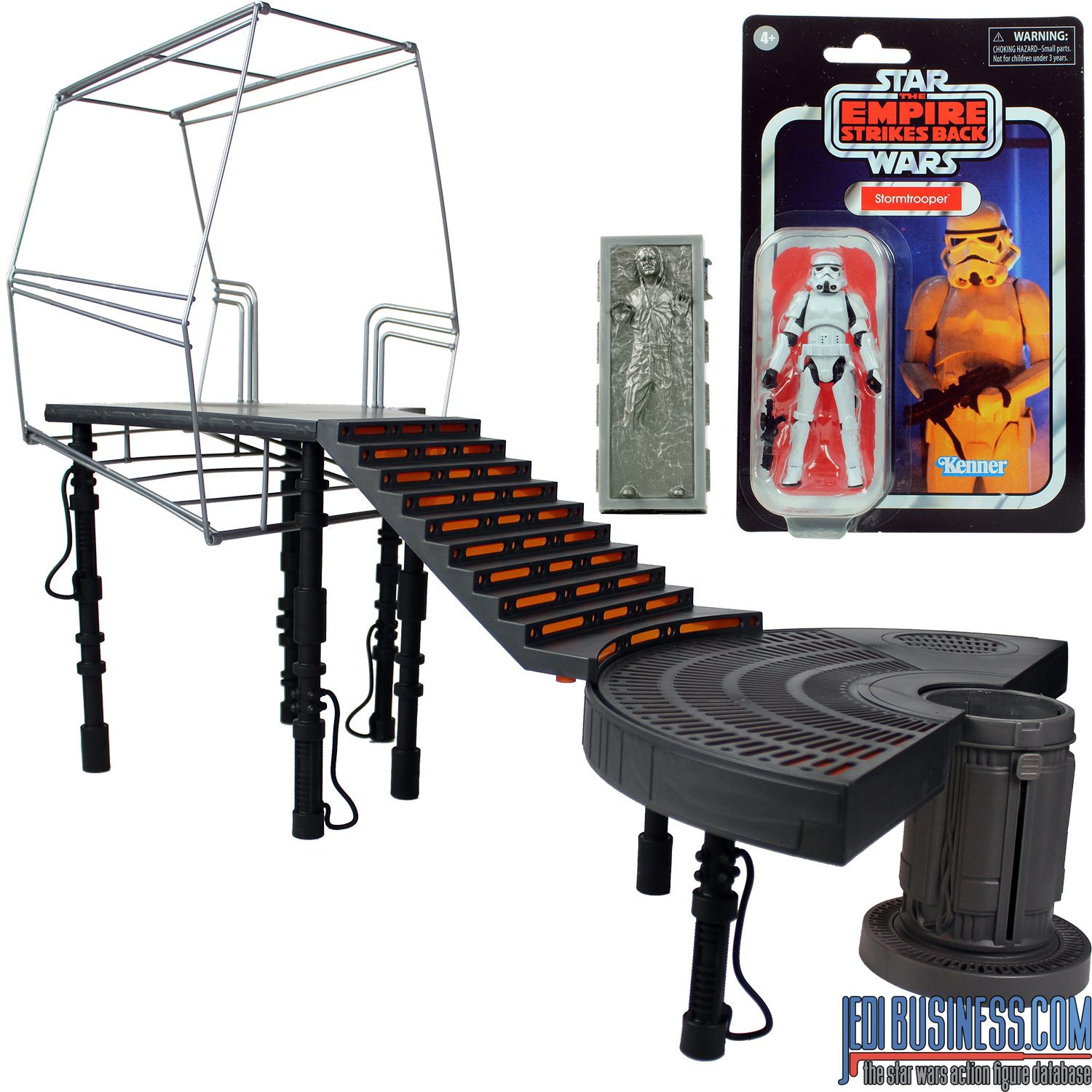 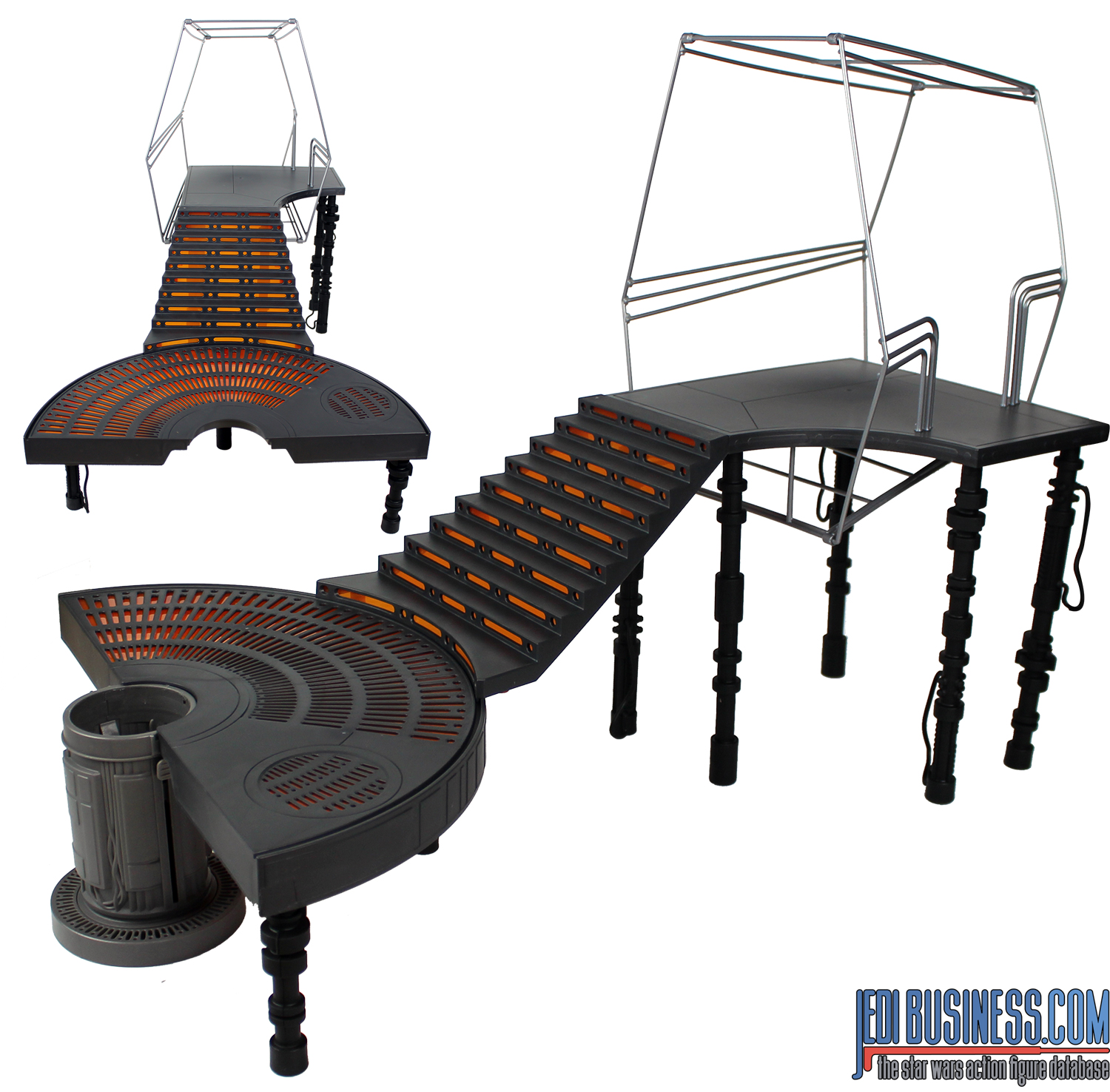 Having two Carbon Freezing Chamber playsets set up next to each other is enough room to place all the necessary figures on it. After freeze framing through the Empire Strikes Back's Carbon Freezing sequences we counted following characters:

If you have the figures of those characters they will fit onto the set. 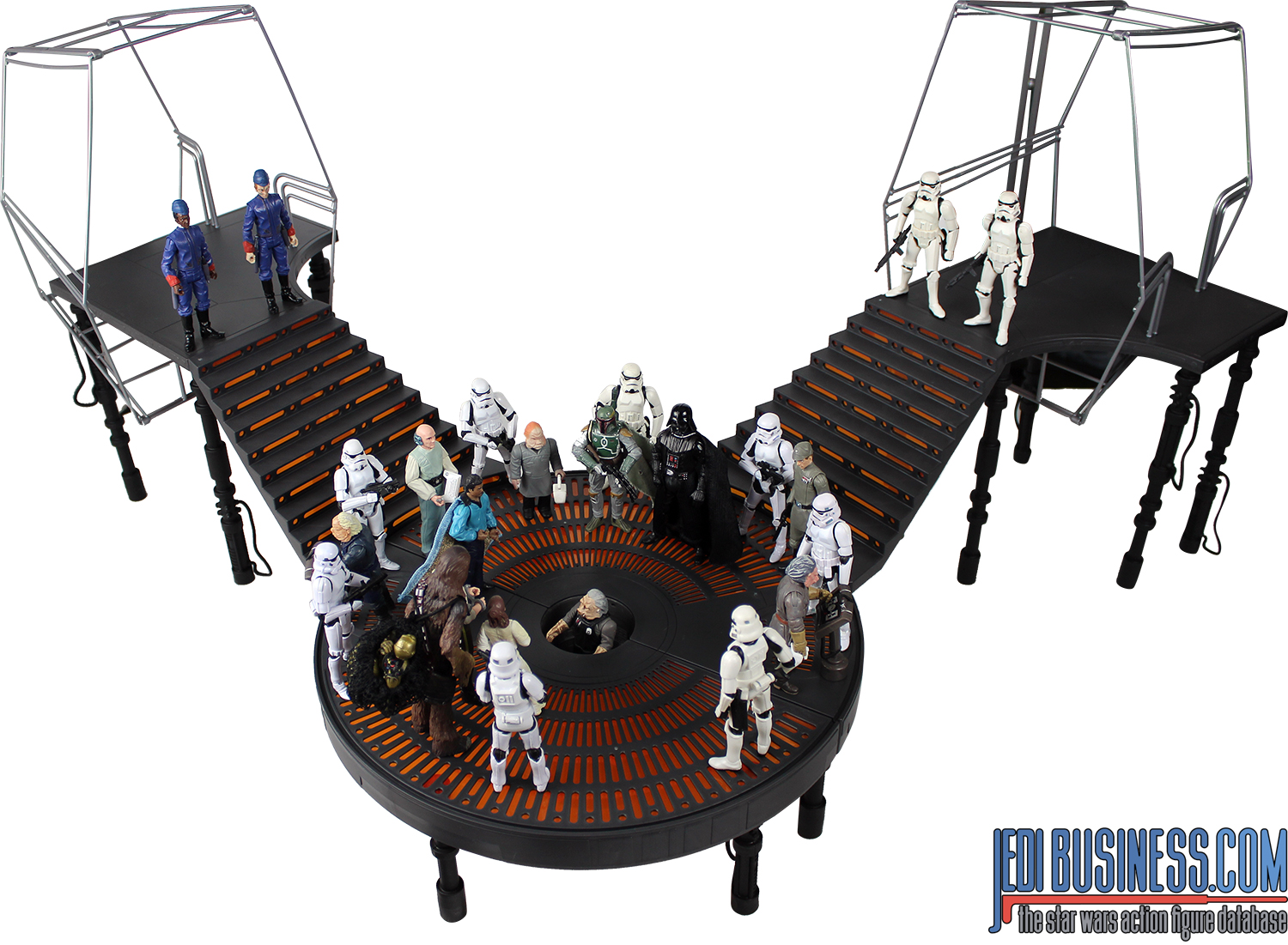 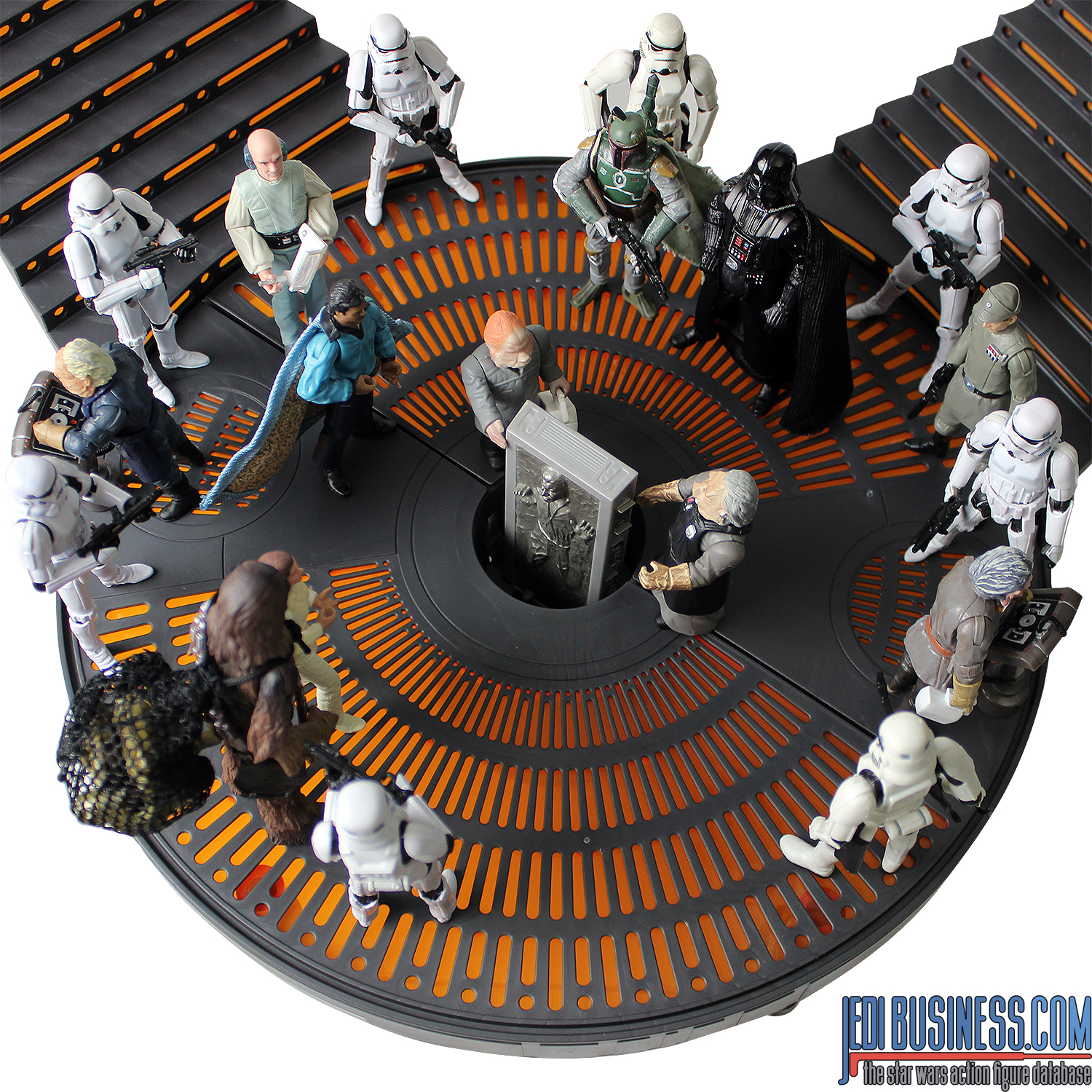 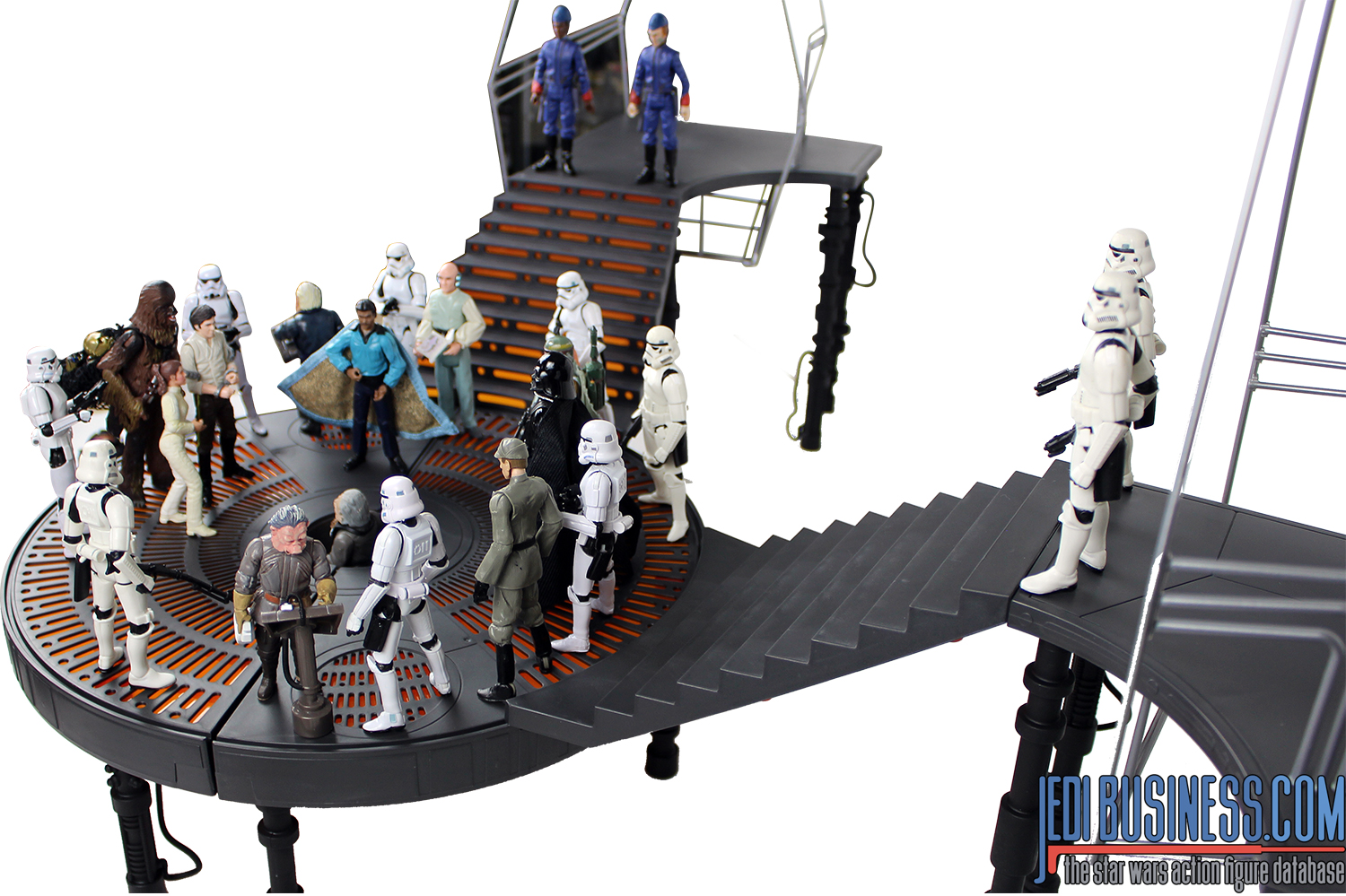 The stairs and the half circle in the middle have orange plastic underneath which makes for some great ambient shots when light shines through from underneath. 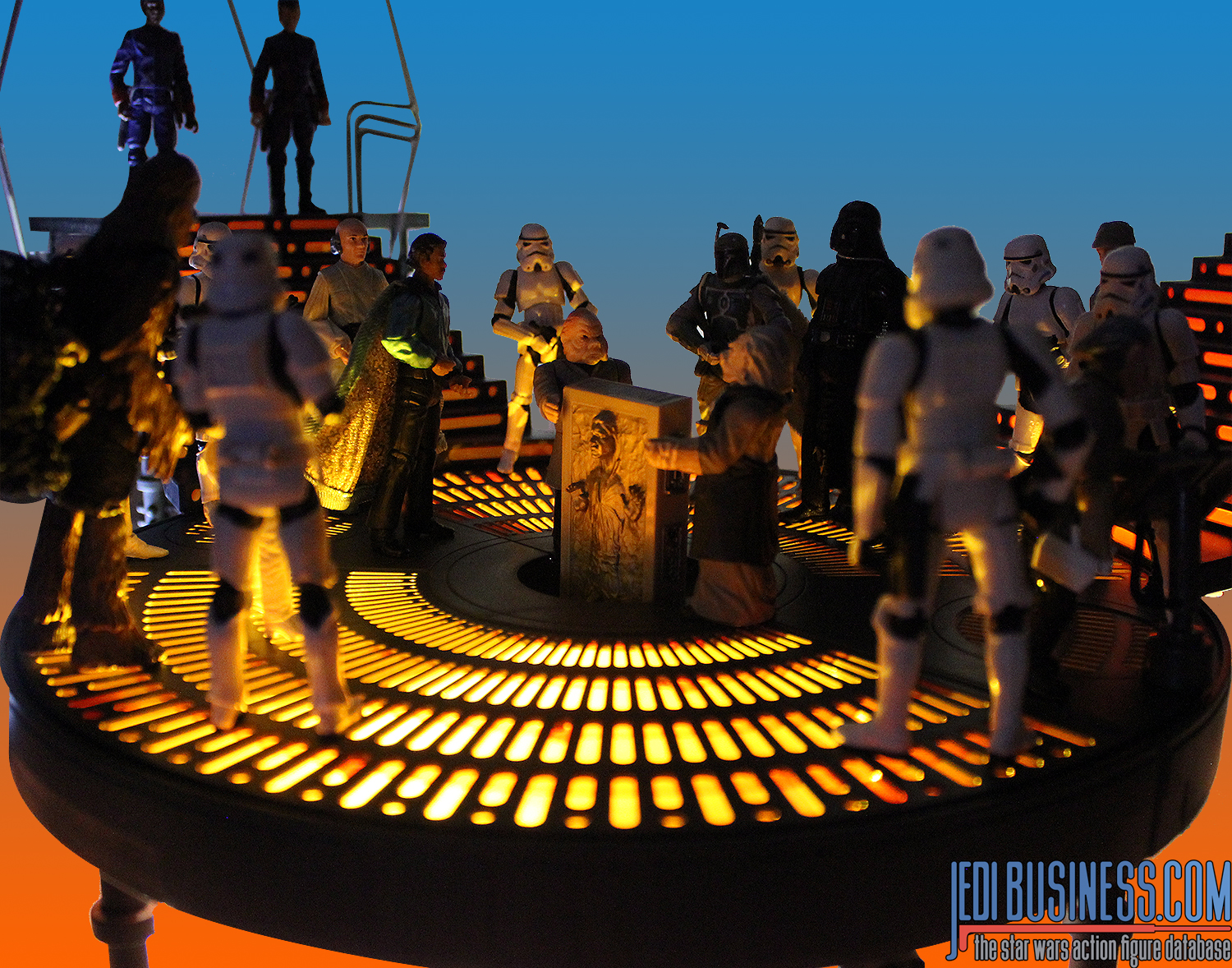 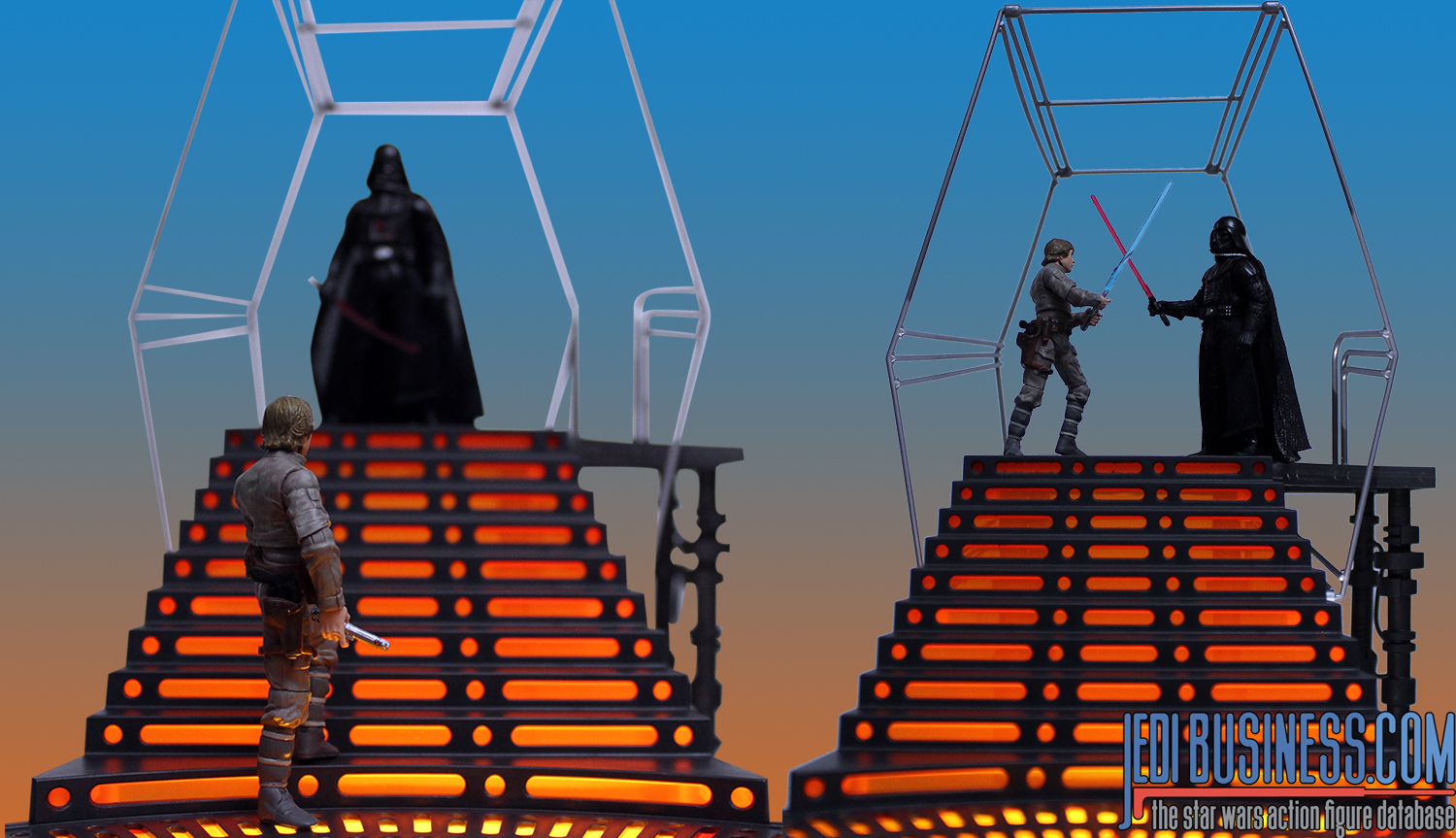 When you open the box you are greeted with parts just tossed in, including the exclusive carded Stormtrooper figure. The scaffolding parts feel flimsy and fragile, but the support poles and all the other included parts feel sturdy. The set up is easy and the option to move the staircase around to make the playset wide or narrow is a nice feature. If you put enough time and effort into displaying two Carbon Freezing Chamber sets next to each other you can get a fantastic display out of it, especially if you add lights underneath.

Setting up the display however brought some shortcomings to light which Hasbro currently has in the 3 3/4" Vintage Collection. Lobot, Leia and Lando, all of them essential to this display, haven't been updated since 2004 (getting close to two decades!). They could really use an update (Leia was announced for Spring 2021, and it's unfortunate that this figure didn't make it onto the box art).

The Legacy Collection Ugnaughts from 2009, released eleven years ago as of this review, hold up well, but a re-release including their control panels would have been a good idea. There are no control panels included with the playset, so the only way to get them currently is to purchase the Legacy Collection Ugnaughts through the secondary market (take a look on Ebay, those figures go for around $70+ each ). It would have also been nice to see the Bespin Guards from the Legacy Collection and even more Stormtroopers (on a different Empire-style card than the one included with the set), so that new fans can build out this diorama.

The last thing which needs to be mentioned is the missing crane which lifts Han Solo out of the chamber and the cables hanging down from the ceiling. Those parts are not included and unfortunately make this playset look incomplete. However, the omission of those parts isn't as drastic as first assumed, because it still makes for a cool display piece, just scroll back up and look at the images.

After several hours of photographing the set and rearranging figures on it, the conclusion is that the Vintage Collection Carbon Freezing Chamber playset turned out nicer than initially expected, but at the same time it could have been executed better. Had Hasbro included a ceiling with a crane and cables, and a third staircase which leads down from the platform, this set would have been a homerun (and likely much more expensive). Overall mixed feelings. What do you think? Post in the comments.