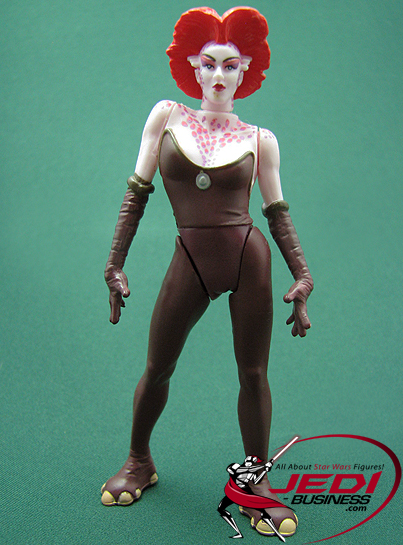 Deep within the dimly lit halls of Jabba the Hutt's palace on Tatooine, the musical combo, the Max Rebo Band, entertains some of the galaxy's most notorious smugglers, mercenaries, and bounty hunters. Besides offering great music, the multi-species band has three of the galaxy's best back-up singers and dancers. Greeata, a Rodian who is also a capable kloo horn player, joined the band at the same time as its lead singer, Sy Snootles. Ryst+íll, an exotic near-human raised by a pair of Ortolan musicians, was a slave under the crime lord Xizor until Lando Calrissian won her by defeating the lord in a sabacc tournament. Lando freed her and Ryst+íll's travels eventually brought her to Tatooine. The third singer is a Twi'lek named Lyn Me, recognized by her people as the greatest dancer out of all the Twi'lek clans. Together the trio of singers/dancers helped the band secure a lucrative, extended contract playing in Jabba's court until a visit from the Jedi Luke Skywalker cause the Hutt's criminal empire to come crashing down.