Aesthetically this figure is good, if it wasn't for his jet-pack on his back. But, it basically looks just like the on-screen counterpart. The paint job is overall pretty good and the figure stands securely by itself, and Kenobi holds his saber tightly. Unfortunately Hasbro didn't include any knee articulation, which makes it hard to pose the figure in any kind of super battle stance. It's also interesting to see that they included a Clone Trooper helmet which doesn't fit on his head. Instead, you have to remove Kenobi's head entirely, and then place the helmet on. This way it doesn't look bulky. Overall it's an OK figure, but considering that this was the very first release of this character based on the new and super hyped The Clone Wars, it's a bit of a let down.

To gain free passage through Jabba the Hutt's routes, the Republic agrees to rescue the crime lord's kidnapped son, Rotta the Huttlet. Obi-Wan learns that Anakin and his team have found the child and are under attack by Separatist forces. Obi-Wan races to join them on the remote planet, bringing much-needed reinforcements to Anakin and his embattled team. 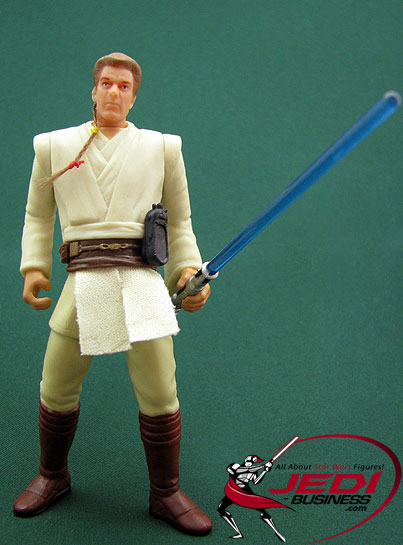