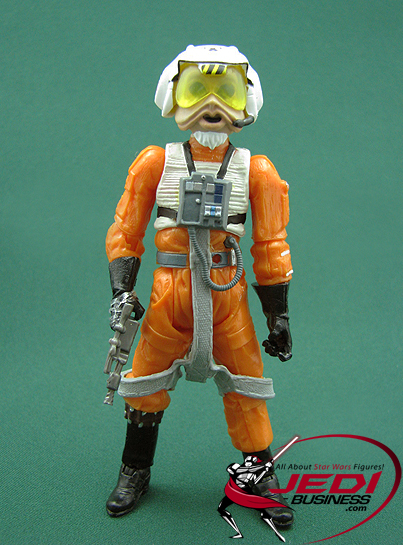 Rogue Squadron pilot Dllr Nep was released in March of 2010's The Legacy Collection, in a comic 2-pack together with Plourr Ilo. The comic 2-pack was exclusively available through online retailers and couldn't be bought in regular stores. Dllr Nep is featured in the Dark Horse comic book series X-Wing Rogue Squadron.

The Sullustan pilot is super articulated with 14 joints, including a ball-jointed neck, shoulders, elbows, waist, knees and ankles. The only swivel joints are in both forearms. The joints are pretty stiff, which feels as if the plastic used here is of better quality than the plastic used on some of the other figures. The pilot's helmet is a great fit with the visor covering the eyes, and the microphone being close to the mouth. Dllr Nep can hold the blaster in both hands, but it's a very loose fit and might fall out when you reposition the figure. The chest box is permanently attached to the X-Wing suit. The cable hanging down from it is also permanently attached, but it can be unplugged from the pilot suit. Since this figure is based on a previously released mold for a Luke Skywalker in X-Wing gear figure, you'll notice a second hole in the jump suit, where originally a lightsaber hilt could be hung from. In Dllr Nep's case, it's not used for anything.

Dllr Nep's paint application is well applied and fits right in with all the other released X-Wing pilot figures. The head sculpt with the little white beard is nicely done and is close enough to what was seen in the comic books to please fans. Overall, this super articulated Dllr Nep figure is another great addition to the X-Wing Rogue Squadron, and if you are a fan of that, you might not want to miss out on this exclusive figure.

Plourr Ilo and Dllr Nep are X-Wing pilots in Rogue Squadron. Plourr is a princess who joins the Rebel Alliance to fight the Empire. The Sullustan pilot Dllr Nep takes part in several dangerous missions during his time with the elite squadron.