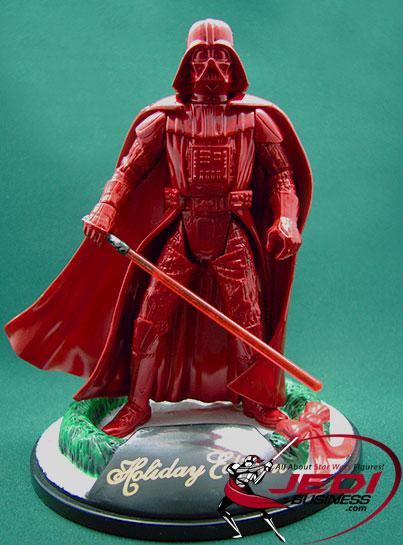 This Holiday Darth Vader was released individually carded and was sold exclusively through StarWarsShop.com in late 2005 during The Original Trilogy Collection. The packaging however was special, and featured a red "vintage-style" border and a red Star Wars logo.

The figure has a total of seven swivel joints. Movable parts include the head, both arms, the upper right arm, the right wrist and both legs. The figure balances out OK even without adjustable ankles and knees, but Hasbro included a cool looking Holiday base where Vader can be placed on. The only weapon included was Vader's lightsaber, which fits well into both of the figure's hands. The removable plastic cape is a good fit and stays well attached around Darth Vader's neck. The right hand can be removed, but why display a holiday figure without a hand?

Hasbro vac metalized Holiday Vader entirely in red. That is a lot of red. It's well done for sure, but it certainly doesn't have the same charming appeal as Holiday Yoda, the Holiday Jawas or the Holiday R2-D2 and C-3PO set. The figure wasn't very well received by collectors, and it marked the last Holiday Star Wars figure which Hasbro released as of this review (2010). It's still a mystery why Hasbro chose to release a holiday figure which wasn't based on any well-known artwork, if any artwork at all. The included Christmas card shows Vader building a snow stormtrooper, which certainly would have made for a much more fun figure. All in all, this Holiday Vader is pretty unique (*cough *ugly *cough), but makes for a fun conversation piece when on display during the holidays.

It is a festive time for the Empire. After a rough year of crushing Rebel uprisings, terrorizing the Outer Rim, and choking incompetent underlings, Darth Vader decides that even a Dark Lord of the Sith needs to give in to the fun side of the Force.

Donning his most celebratory red armor, he leads his Imperial forces to the ice planet of Hoth for some much-deserved holiday festivities. Vader uses his lightsaber and mastery of the Force to create the most detailed ice sculptures in the Galactic Empire, from TIE fighters to star Destroyers. He even gives new meaning to "snowtroopers" by creating an army of troopers from snow.

Thanks to Vader's expert planning, this year's Hoth Holiday Bash is primed to be the best the galaxy has ever known.