This Holiday C-3PO was released as a Walmart exclusive in 2002 in special snow globe-like packaging together with Reindeer R2-D2. Both figures were the very first holiday inspired Star Wars figures released by Hasbro. The figures are based on the Ralph McQuarrie Christmas card design for Lucasfilm from 1979.

Santa 3PO has only two movable parts, which are both legs. They were given swivel joints, but their range of motion is very limited because of the hard-plastic Santa coat, which prevents the legs from going up too far. This C-3PO is basically a statue, not an action figure. The Santa beard, which C-3PO is holding in his right hand is molded into the hand and can't be removed. The hat and Santa coat are part of the figure's mold and can't be removed either. The only other pieces included with Holiday C-3PO were the display stand and the Ralph McQuarrie Christmas card.

The paint application on Holiday C-3PO is cleanly applied. The golden metallic and shiny look on the legs and the head looks great. Unfortunately, the hands look a little bit off, because they were painted with a dull golden color instead of the same golden metallic one found on the legs and head. The protocol droid's posture looks quite nice and is close to how the droid appeared on the McQuarrie Christmas card. All in all, this holiday inspired C-3PO is unique, and together with Reindeer R2-D2 makes for a very nice holiday display, with a little bit of a vintage feeling to it.

Hasbro and Lucasfilm Ltd. are delighted to present, for the first time, this Star Wars Holiday Edition commemorative. Inspired by the artwork of renowned artist Ralph McQuarrie, this specially designed set captures the imaginative vision of McQuarrie's art in collectible 3-3/4" action figure scale. Our gift to you, this piece is a distinctive addition to any Star Wars collection. May the Force be with you, and happy holidays. 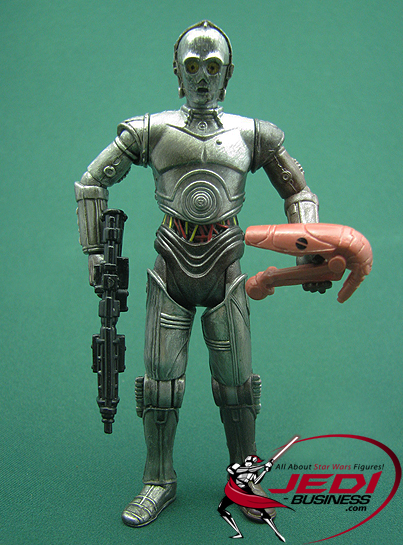