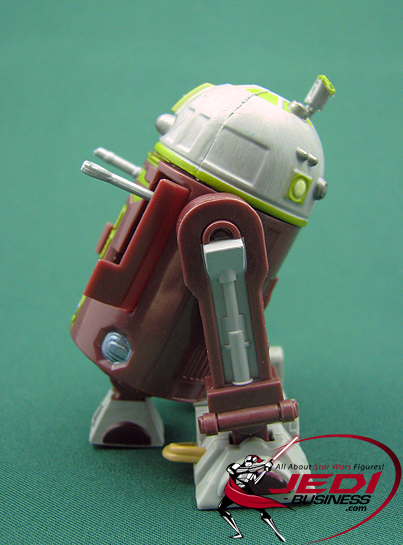 Astromech droid R7-A7 was released individually carded during the Clone Wars Collection in late January 2011. R7-A7 is Ahsoka's astromech droid, which could be seen in various Clone Wars episodes.

R7-A7 is based on previously released astromech droids, such as R4-P17, R8-B7, and Goldie R3-S6. This means that the droid has the basic 5 joints, with a swivel dome, 2 swivel legs and 2 swivel ankles. The leg in the middle of the droid is removable, so that he can be displayed in a three-legged or standing two-legged position. The permanently attached left and right legs have each two rolls in them, while the middle leg has one. This way the droid can be pushed and moved around. There were no accessories included with the figure, but the droid has a few gadgets built-in. On the front, two of the panels can be opened by hand, with each of them containing a tool that can be pulled out. The dome contains an antenna, which needs to be manually pulled up. On the back of the droid is a hidden compartment, which contains a grappling hook attached to a string. By rotating the dome, the grappling hook can be reeled in again.

The paint application on R7-A7 is cleanly applied and seems to match the character's appearance from the Clone Wars. If you own any of the animated-style astromech droids, you know exactly what you are getting here. So, it's an overall cool and fun little droid, with quite a few hidden gadgets built-in. If you like the animated-style astromech droids and are looking for a never-before-done version, you might want to consider adding R7-A7 to your line-up.

R7-A7 is Ahsoka's astromech droid. He joins her on many missions and provides navigational and technical support when Ahsoka flies her Jedi starfighter. Called "Arseven" by Ahsoka, the droid is her co-pilot during the mission to take out the Separatist blockade surrounding the planet Ryloth. 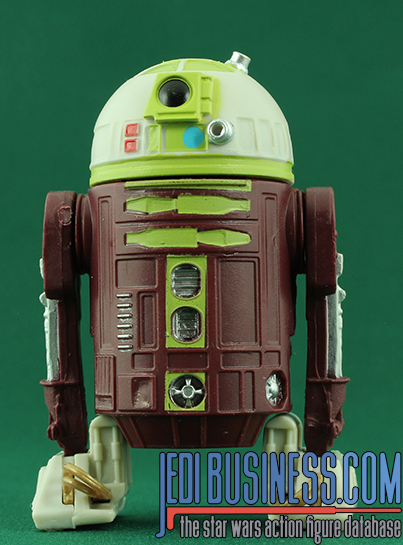