This year's San Diego Comic Con 2022 exclusive action figure was a Black Series 6" Boba Fett (In Disguise) action figure which is based on one of Bobas many comic book appearances, you can look at the figure here: SDCC 2022 Boba Fett.

A few days prior to San Diego Comic Con 2022 it was revealed that Hasbro Pulse Con will return this year on September 30 and October 1, 2022. The Star Wars exclusives for this year's Hasbro Pulse Con are the Black Series 6" Cassian Andor with B2EMO ($55.99) and the Vintage Collection The Rescue multipack ($74.99). 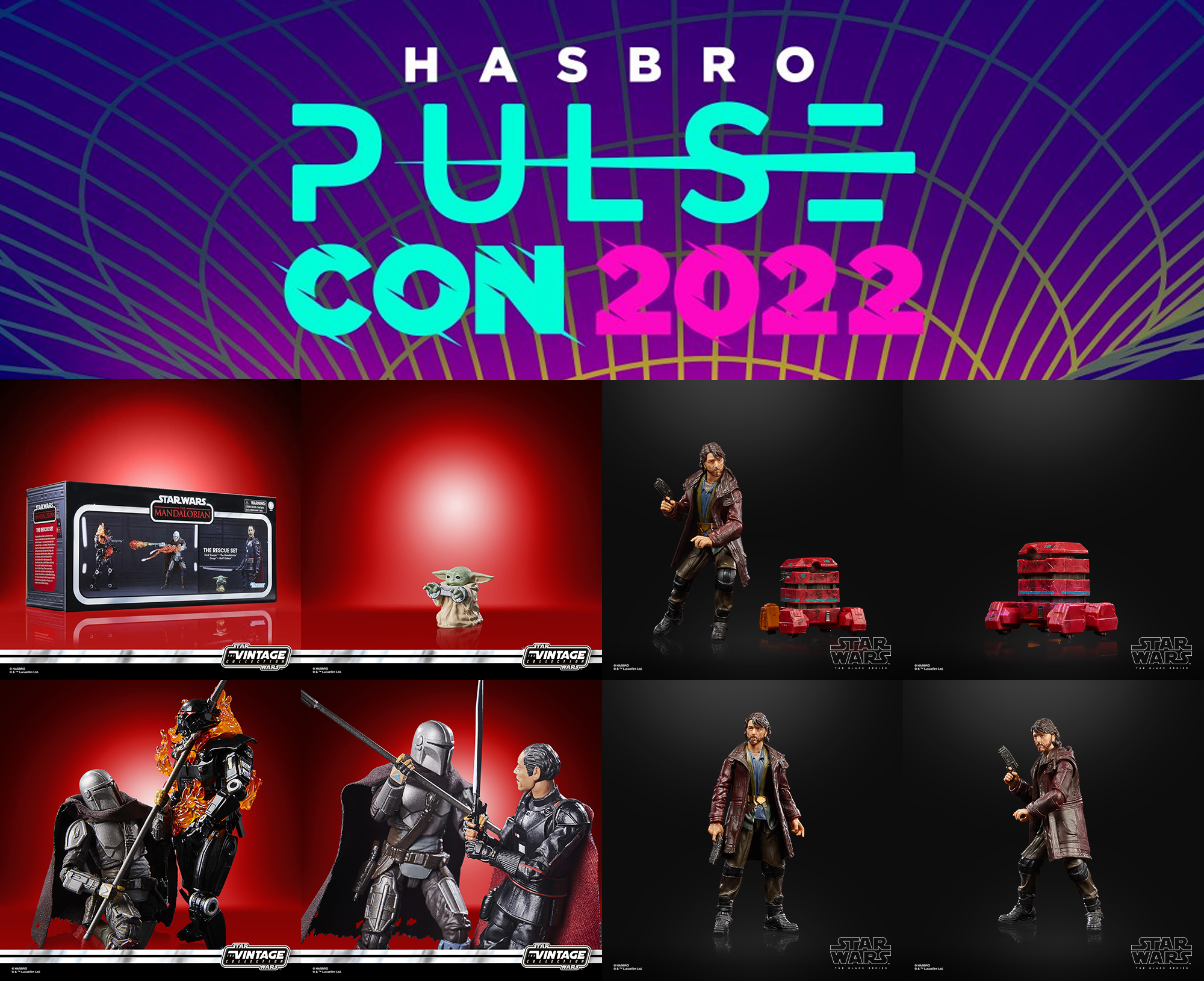 Hasbro will re-release Boba Fett's Slave 1 vehicle but repainted in Star Wars: The Book Of Boba Fett colors and packaging. It will also include an exclusive Boba Fett figure which has not been released so far and it's unclear if it will come single carded or if it will simply be "loose" in the box. The Slave 1 vehicle came out for the first time in 2012 as an Amazon exclusive and it was re-released with a much improved paint application and an additional display stand for the 40th anniversary of the Empire Strikes Back in 2020 (check it out here). The vehicle will go up for pre-order on July 23, 2022 at 5pm ET at a variety of online retailers for $199.99 and it's expected to ship to households in Spring 2023. This is a fantastic vehicle and if you like the Book Of Boba Fett or Boba Fett in general make sure to add this to your collection at some point. If you want to support the work here on GalacticFigures.com have a look at our affiliate partner Entertainment Earth please. 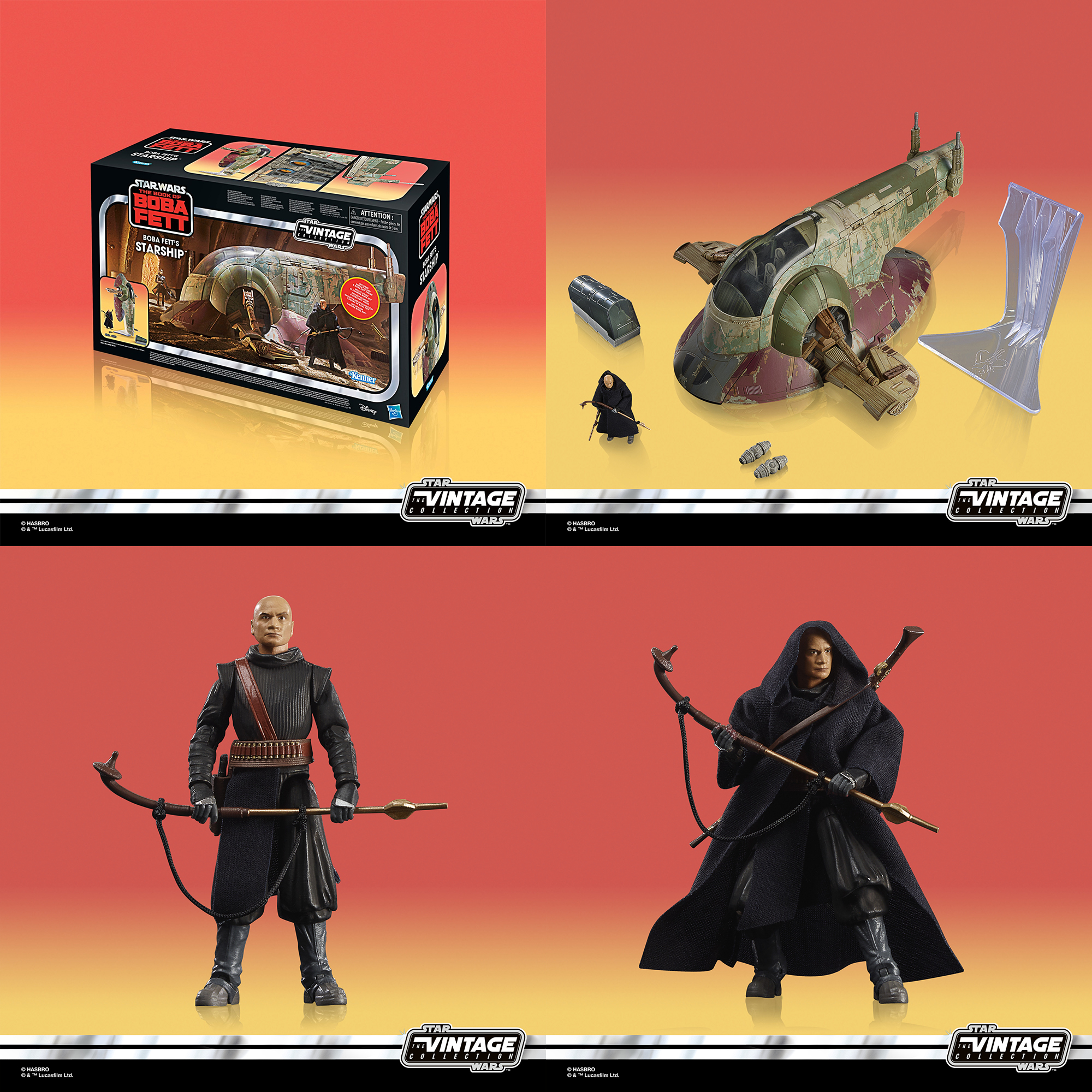 The Vintage Collection will see the additions of Luke Skywalker (Imperial Light Cruiser) (a partially new figure), Cal Kestis and BD-1 from the up-coming Jedi: Survivor video game and the Klatoonian Raider (a re-release of the previously Best Buy exclusive figure which came with the AT-ST Raider but now single carded) from the first season of the Mandalorian. Each figure will set you back $14.99 and they will be available at a variety of online stores including Entertainment Earth. Pre-orders for the figures begin on 7/23/2022 at 5pm ET, check Entertainment Earth!. 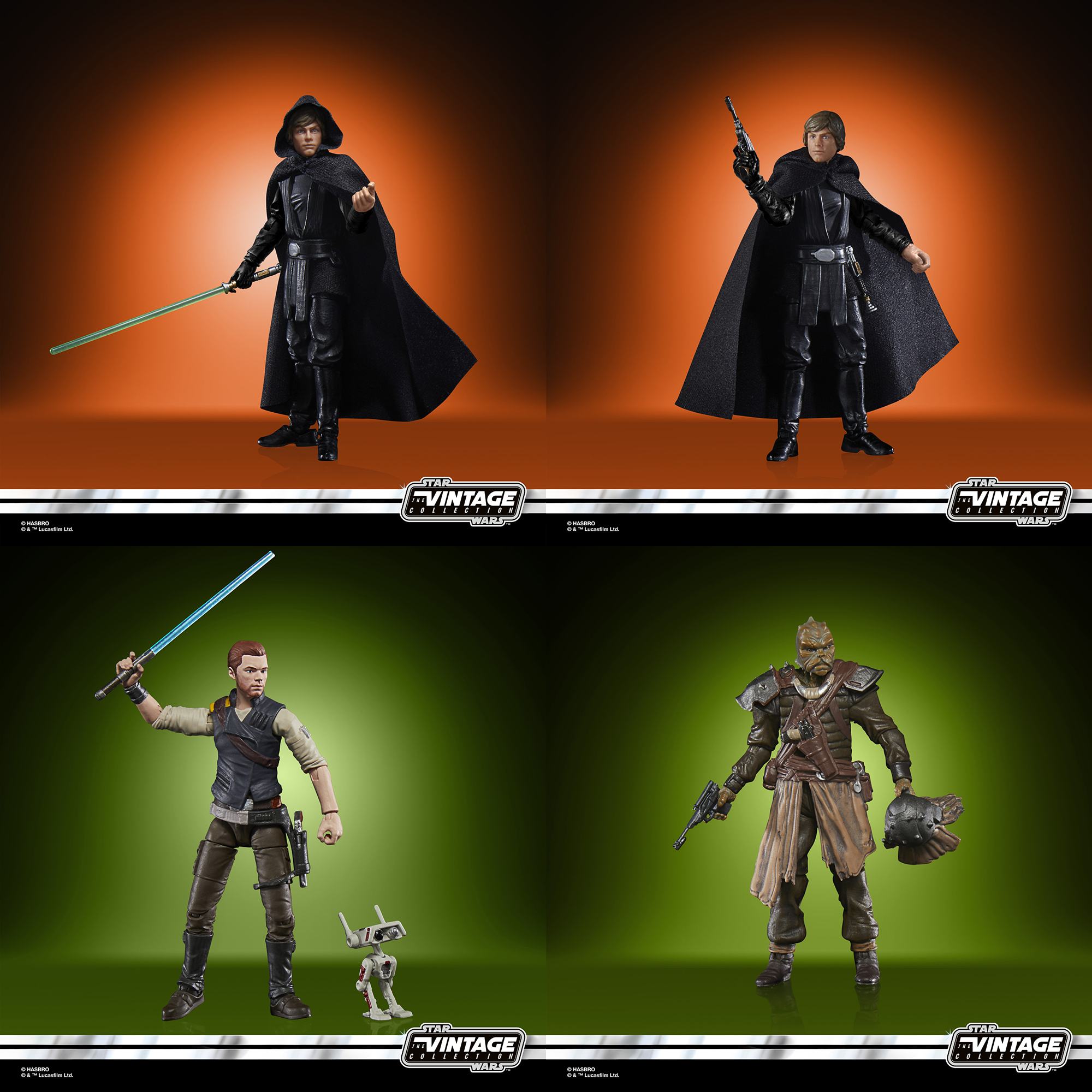 Pipeline reveals for a future release in the Star Wars: Vintage Collection included Han Solo (Trench coat), Admiral Piett, a newly sculpted Clone Trooper in Phase II armor and a Biker Scout with a newly sculpted Speeder Bike. Unfortunately the figures were too early in the development process and no images were available yet.

It was announced that Hasbro is going to finish the original 12 Kenner figures from 1978 in the Star Wars: The Retro Collection by releasing the final six figures which collectors have been missing since 2019 when the line launched with the first six! This includes the Jawa (with soft-goods cloak), Ben (Obi-Wan) Kenobi, C-3PO, R2-D2, Tusken Raider and the Imperial Death Squad Commander! It's wonderful to see that Hasbro vac-metallized C-3PO fully and R2-D2's dome! This set will cost $94.99 and it's a shared exclusive between Hasbro Pulse and ShopDisney.com. The set is expected in Spring 2023.

The only negative about this multipack is the price which is going to be $94.99 because the first multipack with an equal amount of figures cost $69.99,  which is $25 cheaper than this set. 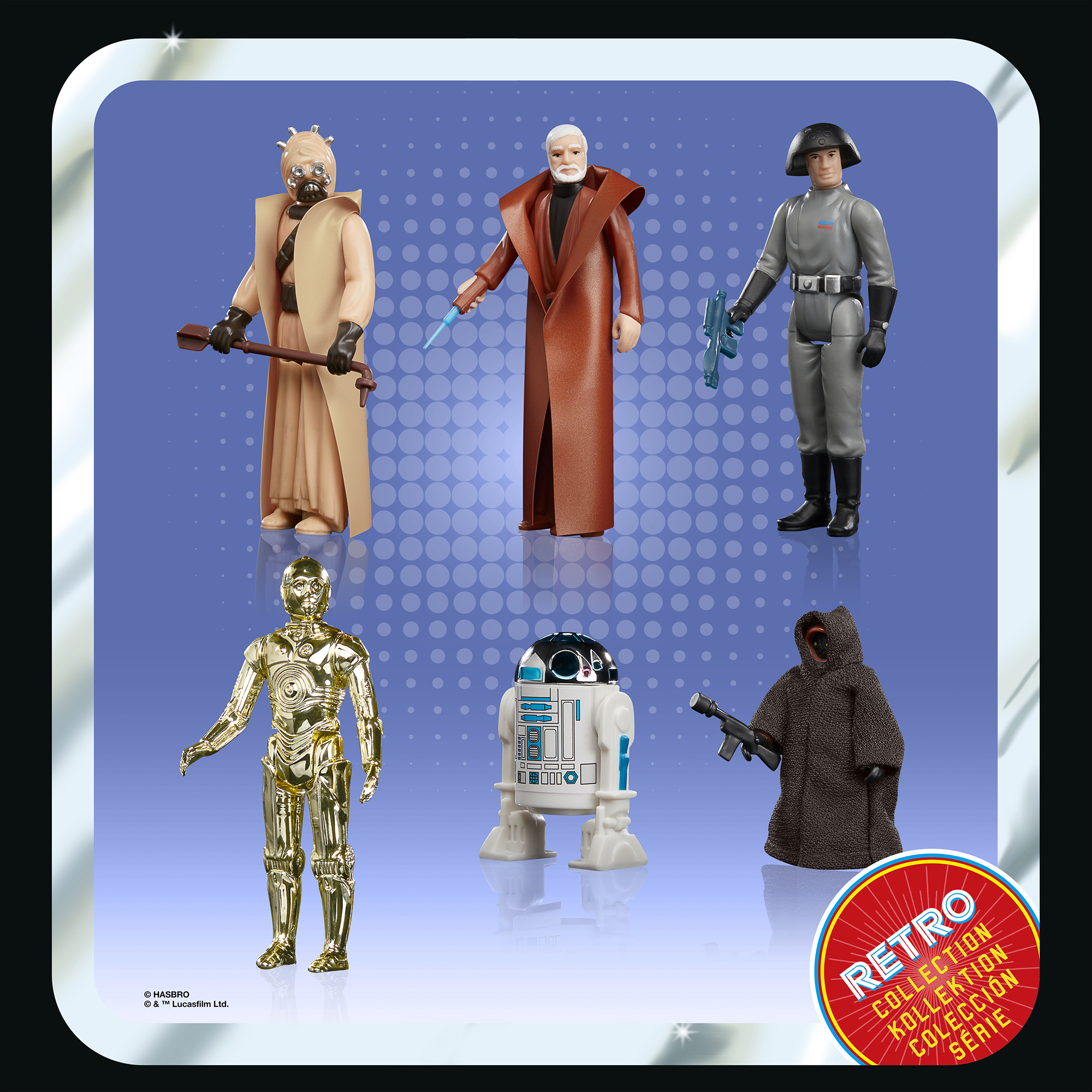 Pipeline reveals for the Star Wars: The Retro Collection included a look into 2023 for the 40th anniversary of Return Of The Jedi. The revealed figures included Luke Skywalker (Jedi), Princess Leia Organa (In Boushh Disguise), Han Solo (Endor), Lando Calrissian (In Skiff Guard Disguise), Emperor Palpatine and a Biker Scout!

The Black Series saw the most revealed figures at San Diego Comic Con 2022. The mainline will see five new additions for the Mandalorian TV series with Axe Woves, Grogu, Migs Mayfeld (season 1), HK-87 and Luke Skywalker (Imperial Light Cruiser). Look for pre-orders to go live for those figures today 7/23/2022 at 5pm ET at a variety of online stores including Entertainment Earth. 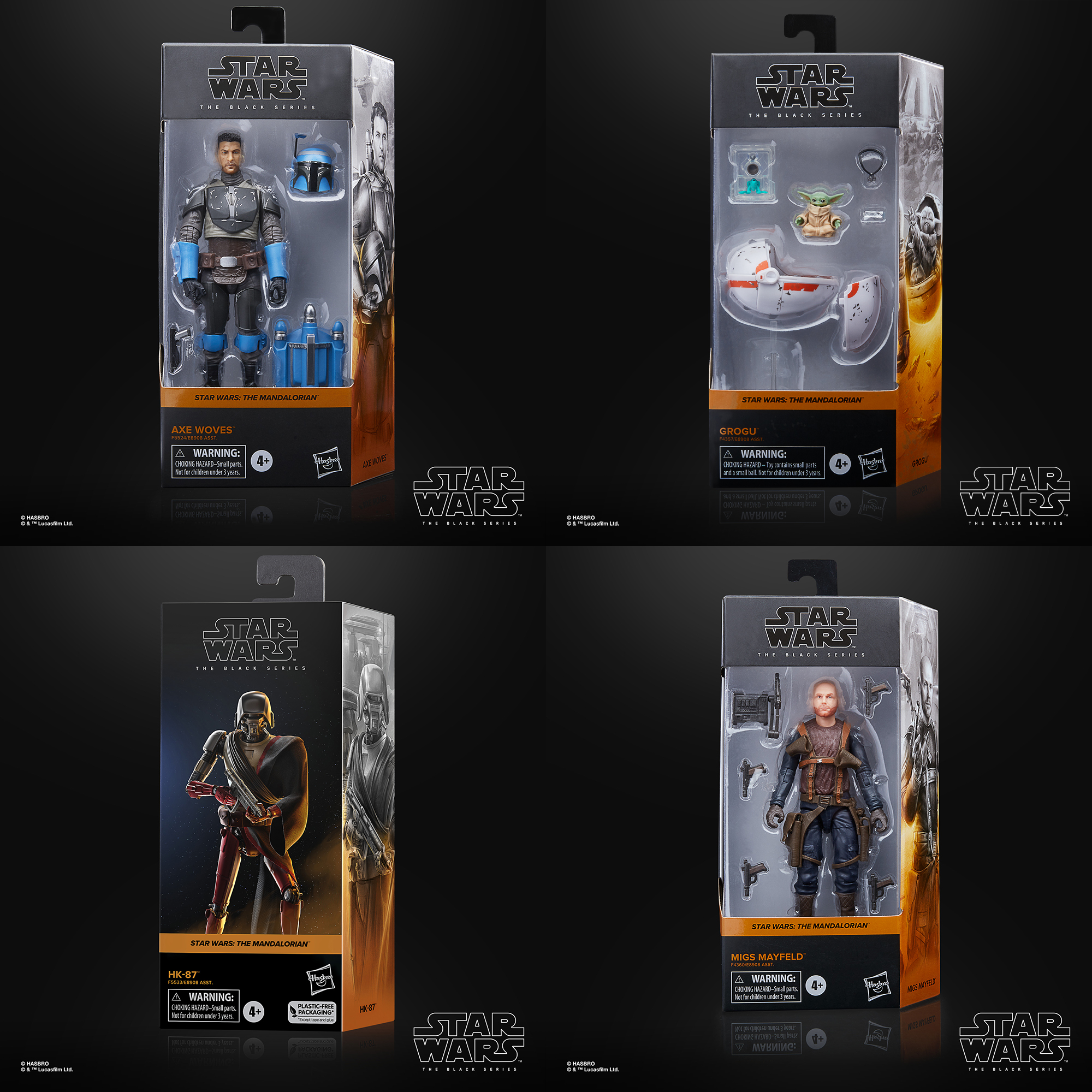 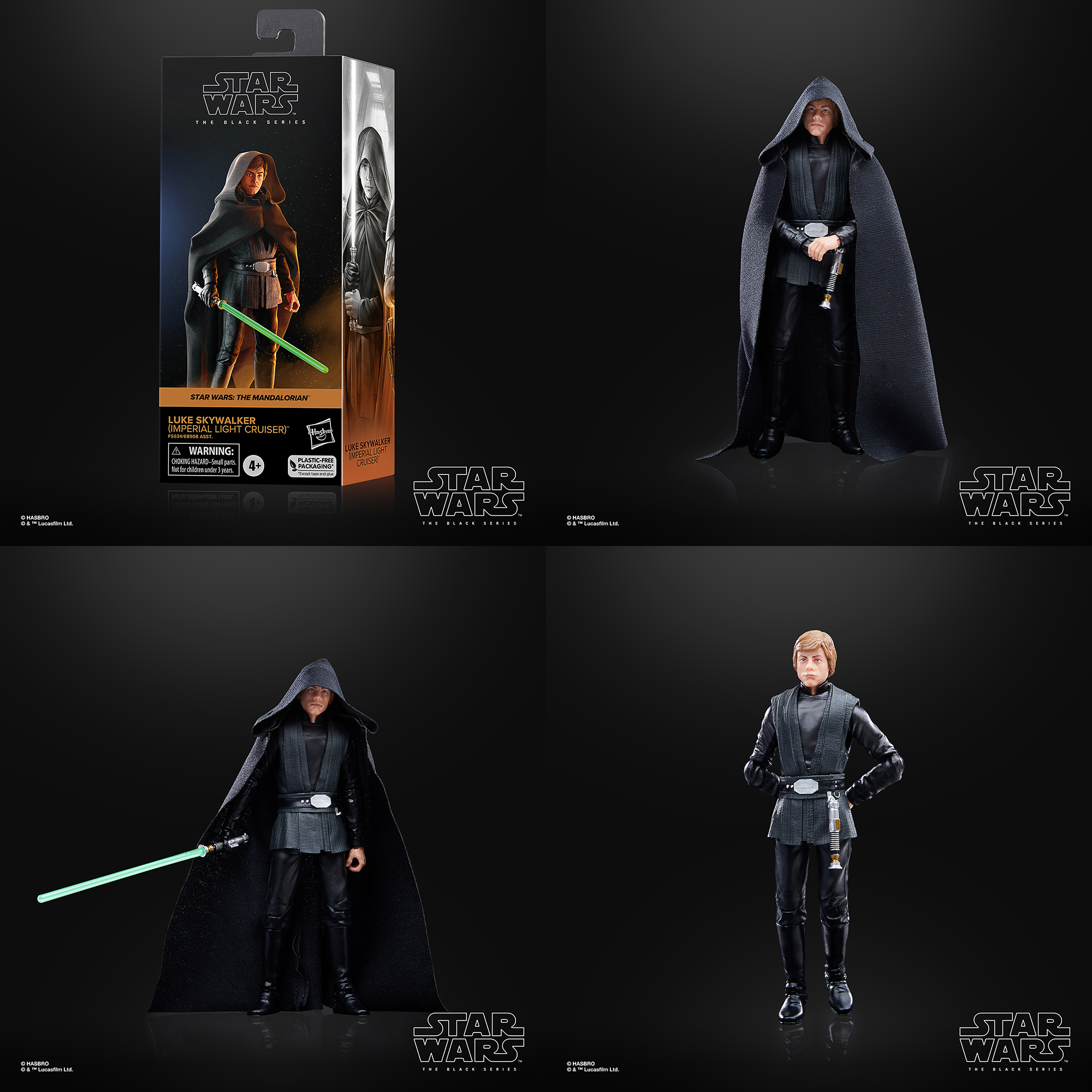 Just like the Christmas/Holiday Black Series figures in the past where Hasbro repainted existing figures in traditional Holiday colors, they are now going to release Halloween themed figures. The sub-line will start off with a Wookiee and Bogling and a Clone Trooper with Porg. The Wookiee will be a Walmart exclusive figure while the Clone is exclusive to Target, each will cost $27.99 and pre-orders will begin later this coming Fall 2022. 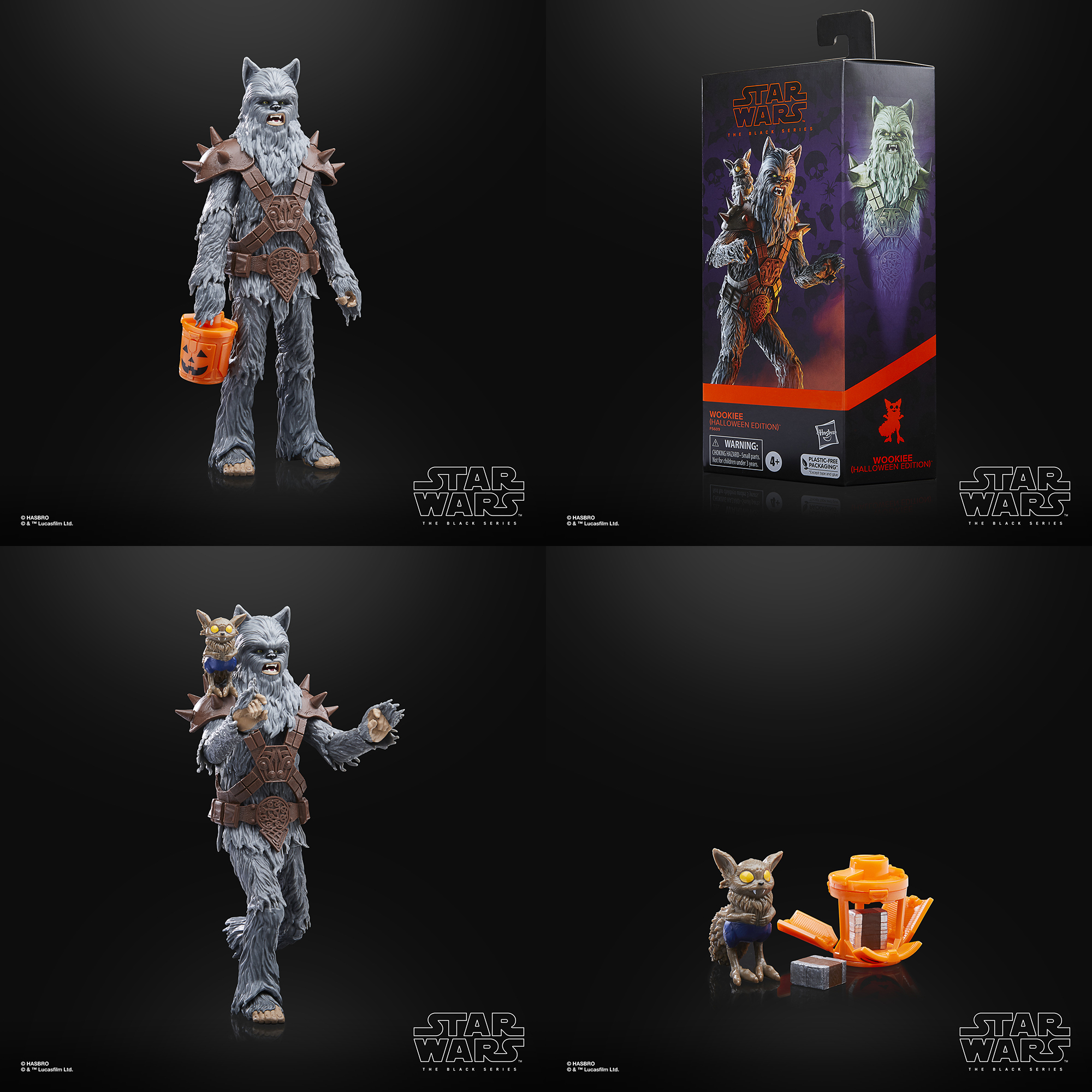 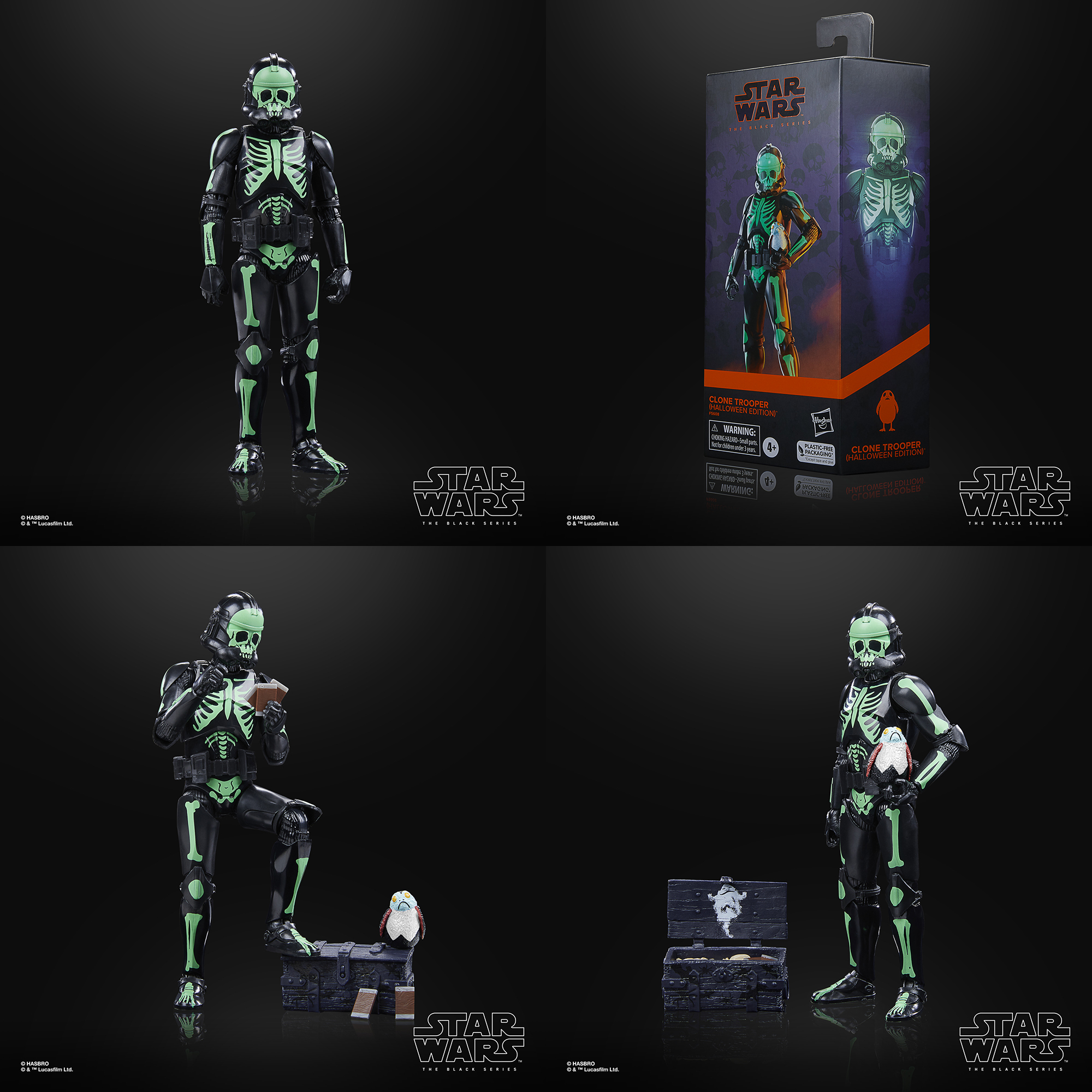 For the Gaming Greats line-up in the Black Series Hasbro is going to release more figures from the up-coming video game Jedi: Survivor with the B1 Battle Droid and the KX Security Droid. Both figures are exclusive to Gamestop, they each will cost $27.99 and will go on pre-order on 7/28/2022 at 1pm ET. 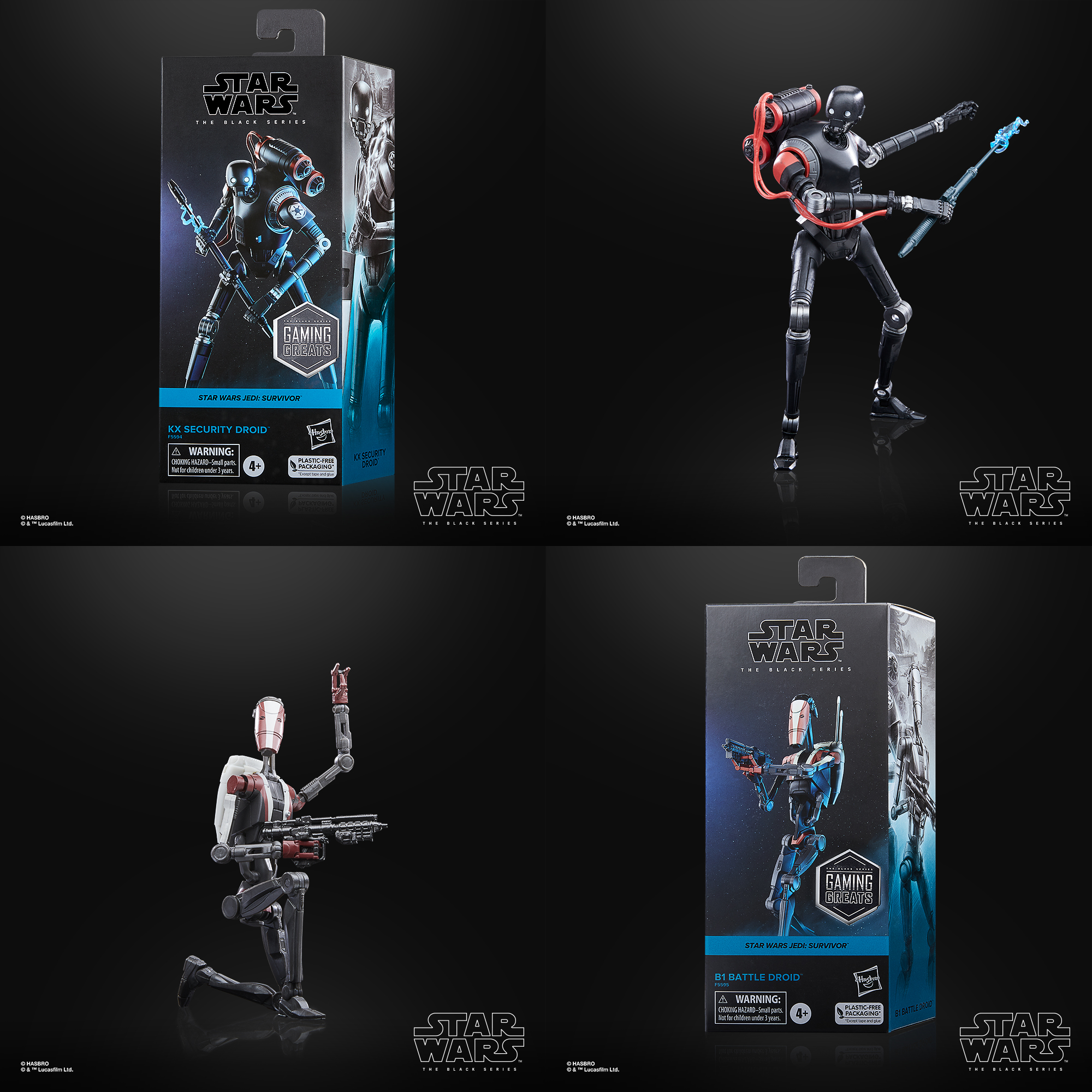 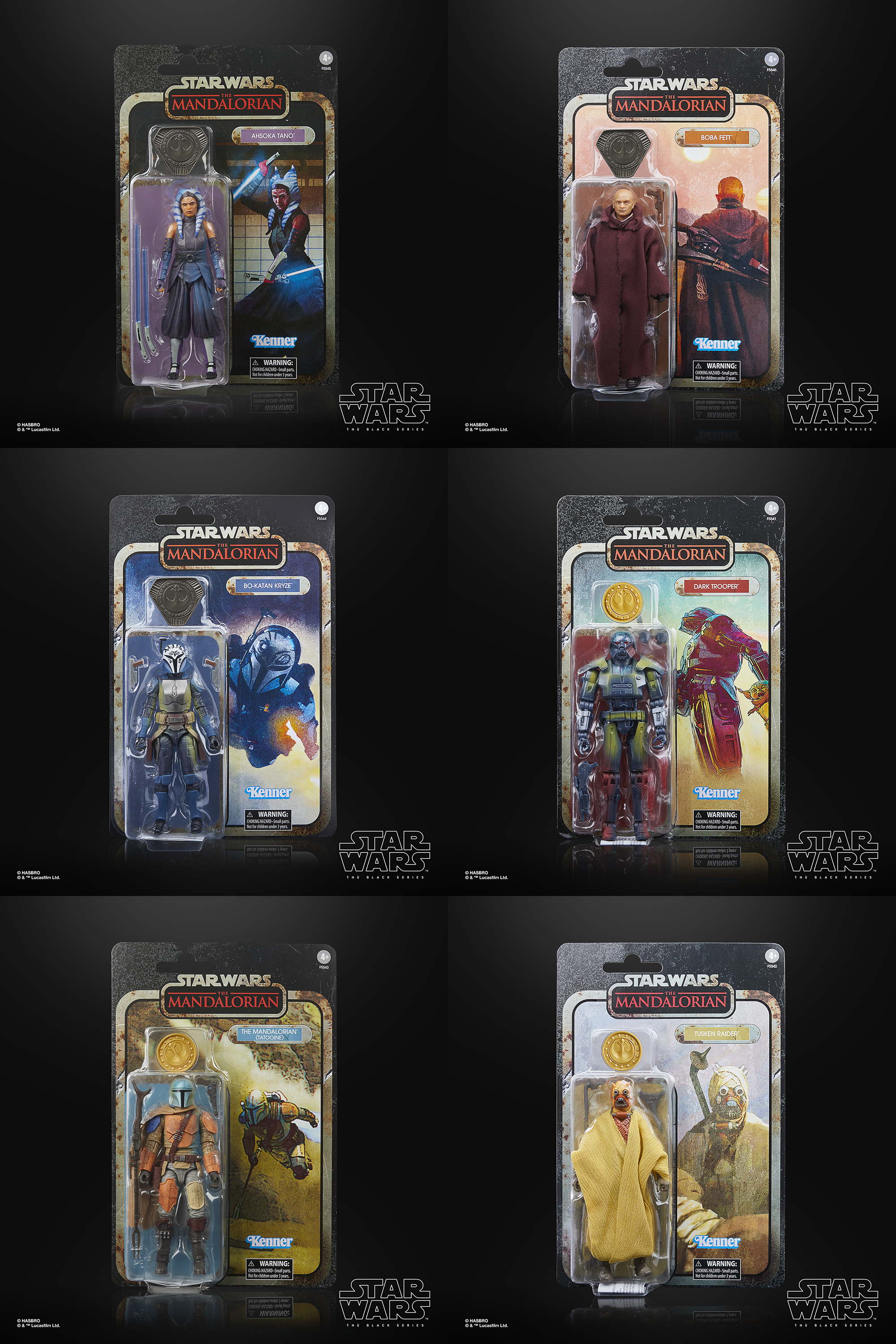 And that was it ... thanks for reading!