A Comparison Of 4-LOM And Zuckuss Tribute Figures

Here is a look at the newly released Amazon exclusive The Empire Strikes Back 40th Anniversary 4-LOM and Zuckuss Black Series 6" 2-pack, along with comparison pictures of the two inspirations for this set, the original Kenner figures and the 2010 Vintage Collection set.

When the Empire Strikes Back was released in movie theaters in 1980 and Kenner released action figures from the movie there were two figures mixed in which had their names swapped. 4-LOM, which stands for For The Love Of Money, was the name printed on the packaging for Zuckuss, and Zuckuss was the name printed on the packaging for 4-LOM. It's unclear when this error was found or how it happened, but it's something that fans picked up on a while ago, and Hasbro has been running with it and celebrating this inside joke for more than a decade.

Here is a look at the original Kenner figures. As you can see the color schemes were fairly simple, and the colors on the outfits were the inspirtation for the modern tribute figures in 2010 and 2020. 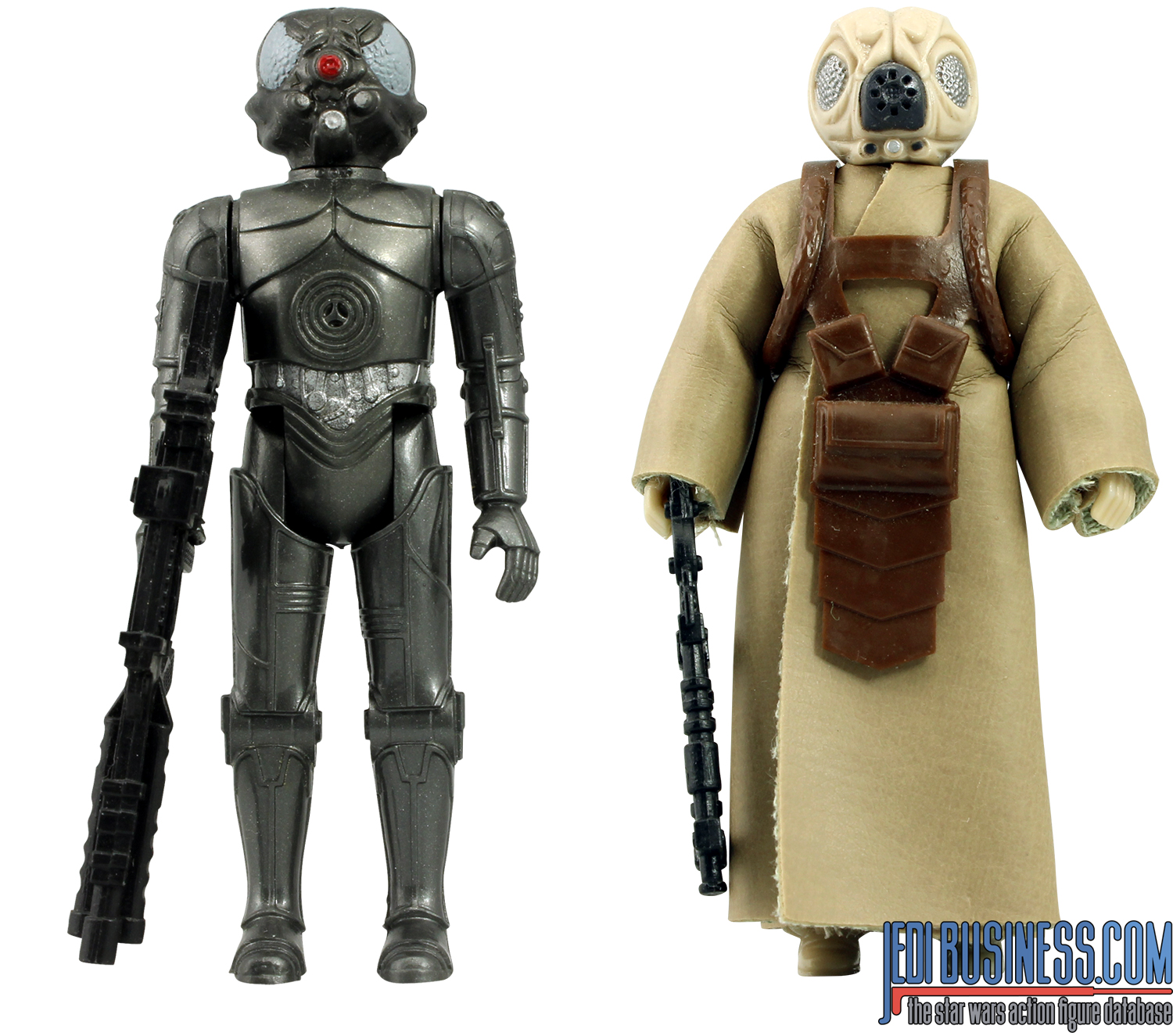 To celebrate the 30th Anniversary of The Empire Strikes Back in 2010 Hasbro released a two pack which included a 4-LOM and a Zuckuss Vintage Collection 3.75" figure. The set debuted in April 2010 at Jedi Con Germany and was a Star Wars Celebration V exclusive later in the same year. The box set came with a removable slip cover which had the logo and parts of the art embossed in a highly reflective silver color. The box which houses the two individually carded figures has a plastic window which showcases each figure. 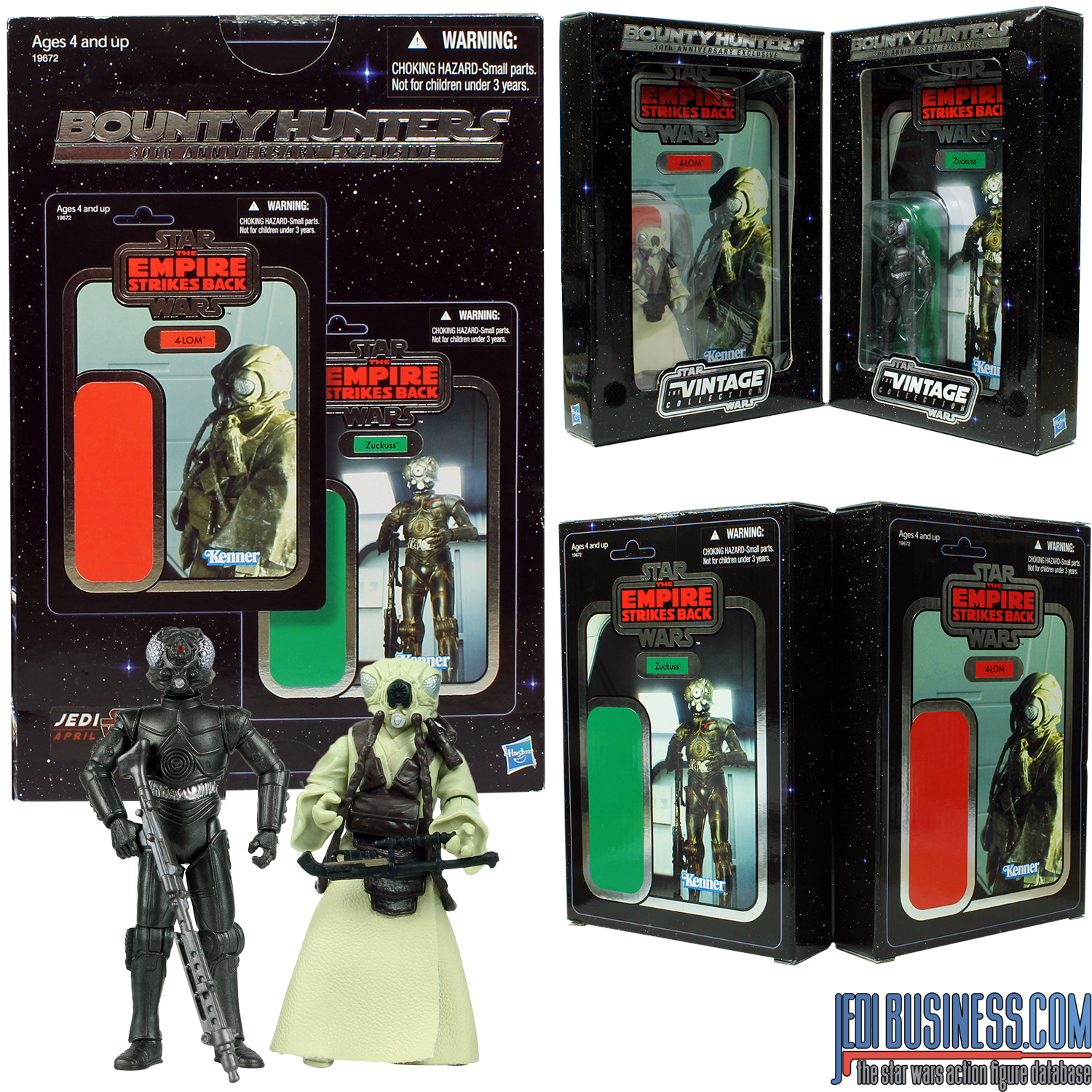 Fast forward another ten years into the year 2020 and the 40th Anniversary of the Empire Strikes Back was celebrated with yet again another intentional error versions of 4-LOM and Zuckuss, but this time in a larger 6" scale and exclusive to Amazon.com. As you can see the figures were painted just like the original Kenner figures from 40 years ago and the outside packaging is reminiscent of the Vintage Collection 2-pack from 2010. 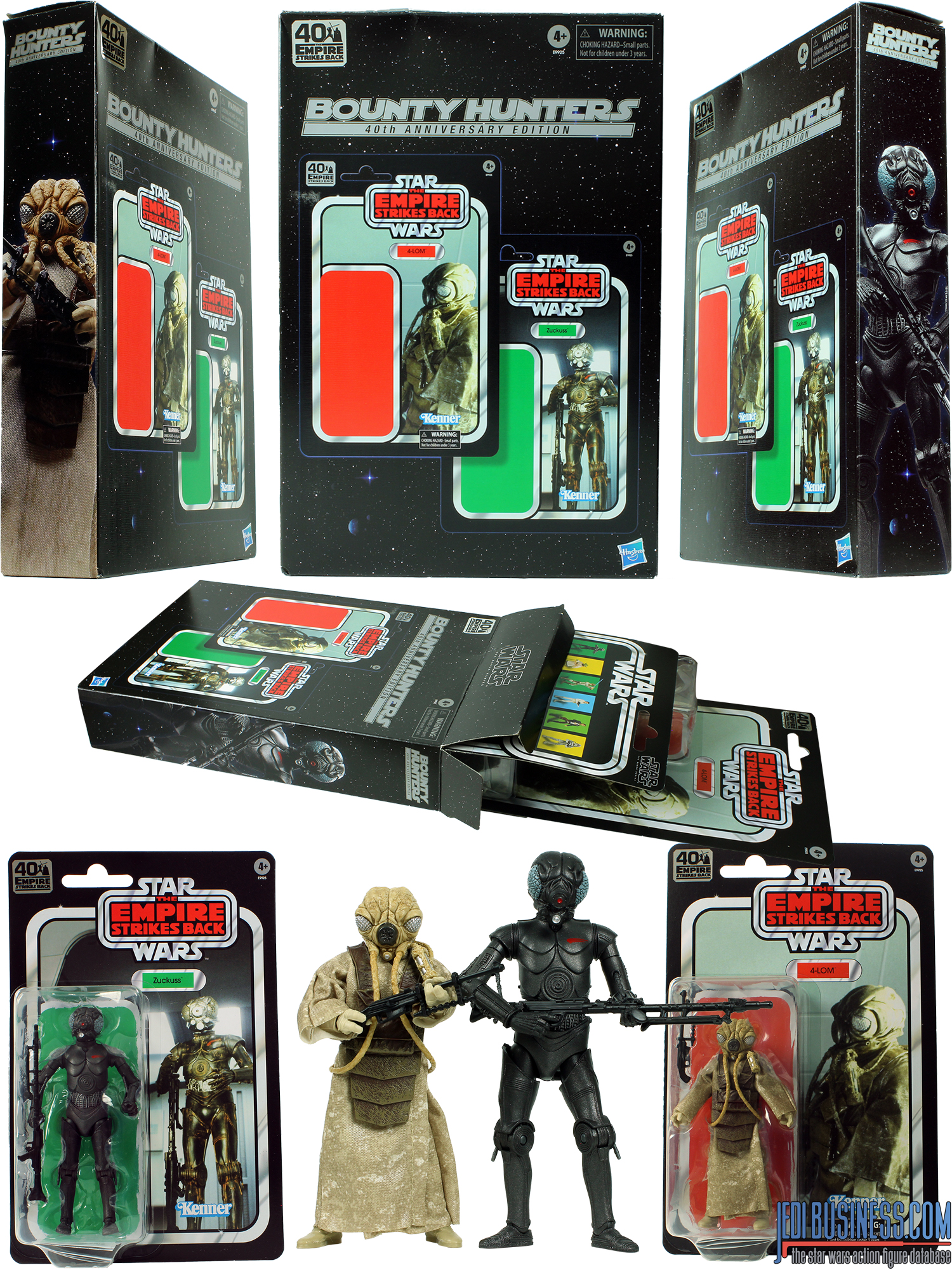 Unfortunately the Black Series 6" tribute set isn't quite as nicely designed as the 10 year older Vintage Collection set, because it doesn't have a slip cover, it's not embossed and it doesn't fold open so that the carded figures could be displayed while being kept inside the presentation box.

The Amazon exclusive Black Series 6" set was difficult to get in a good condition because Amazon mailed them out in a simple bubble mailer instead of a box, this resulted in many of the thin boxes being dinged and creased on the outside. Below is a comparision picture of the 2020 Black Series 6" and the 2010 Vintage Collection boxes. 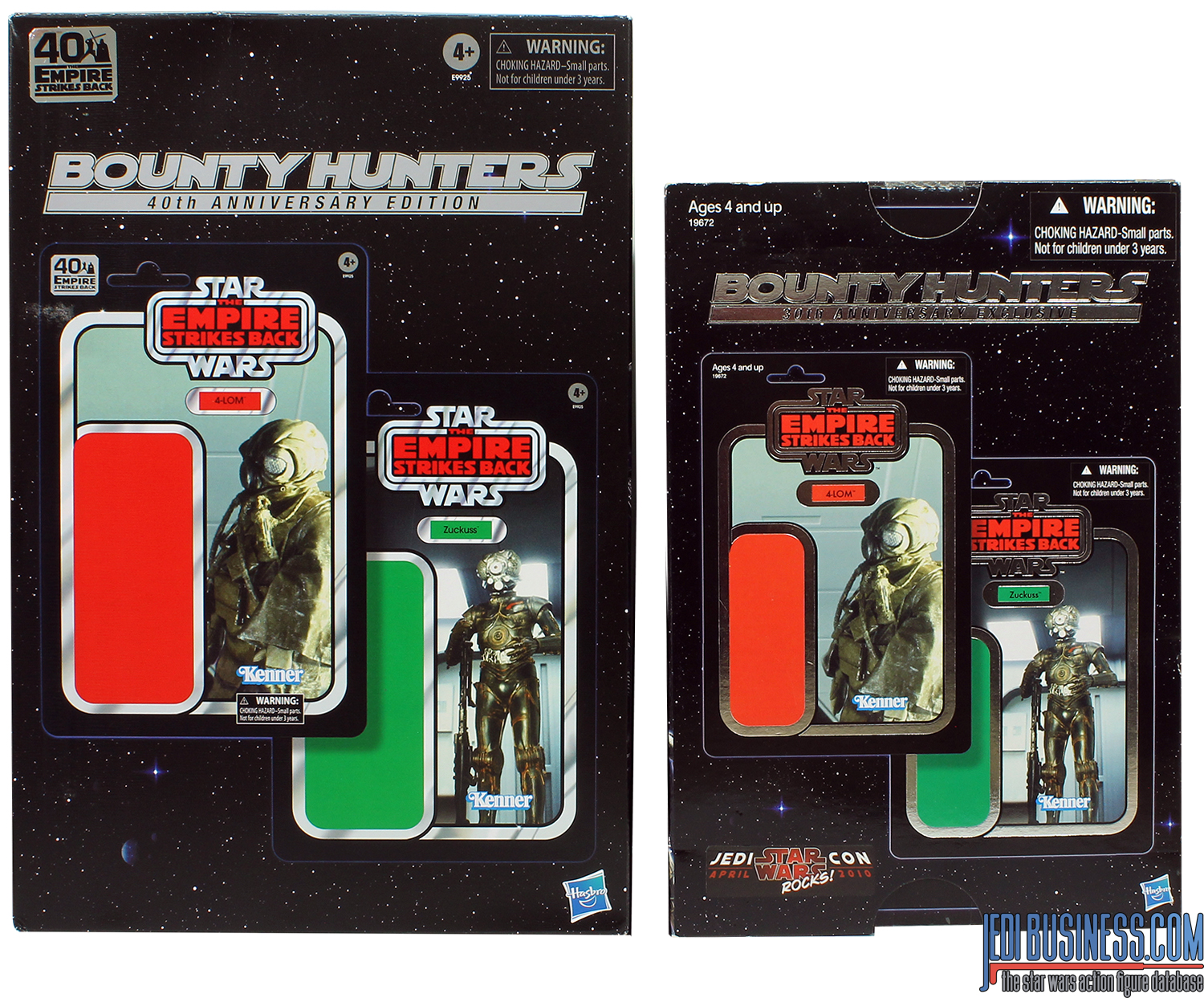 The original Kenner 4-LOM figure didn't have a red stripe on the chest, this detail was carried over to the 2010 Vintage Collection 4-LOM figure, but was missed for the Black Series 6" figure and it now has a red stripe. 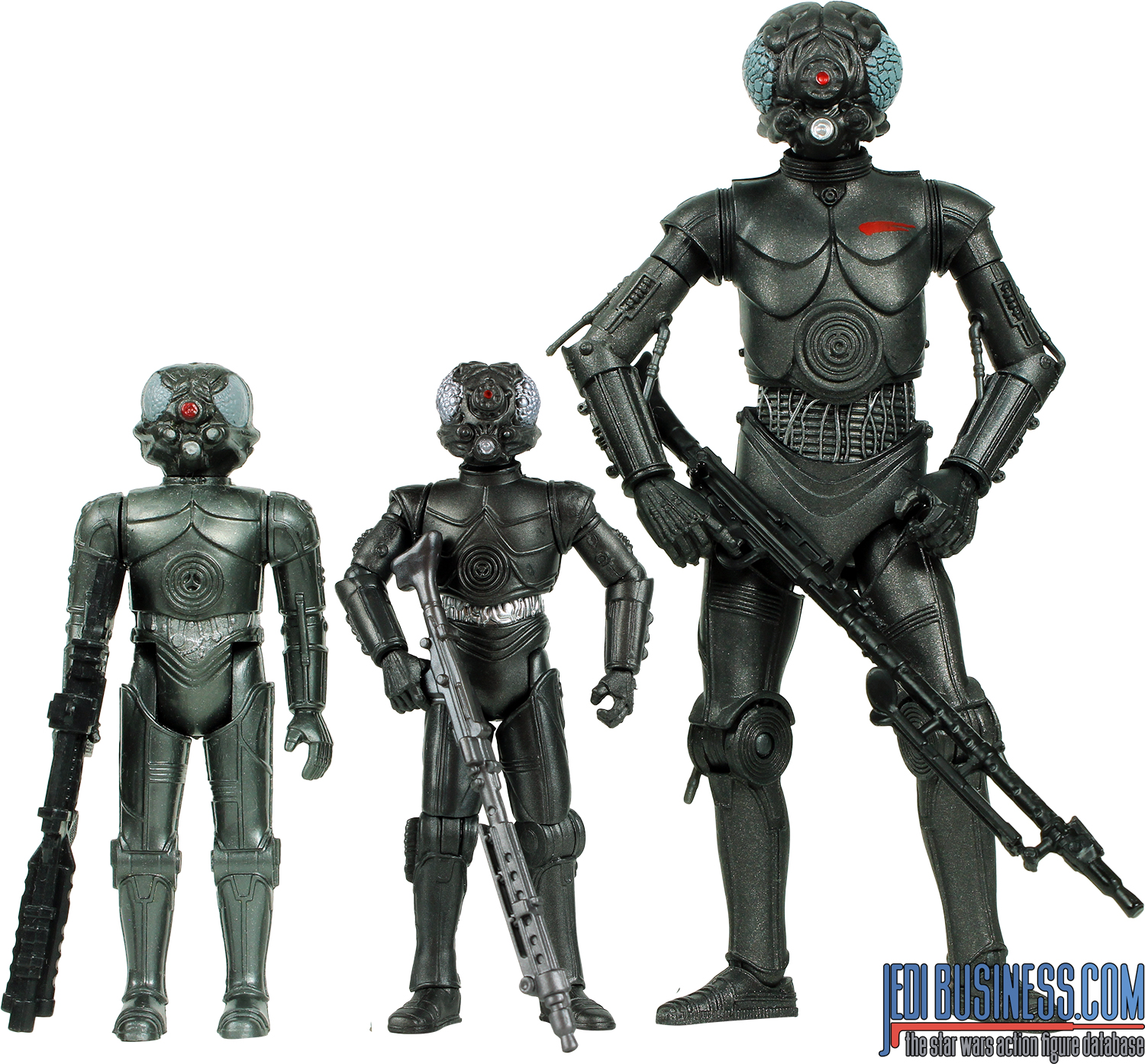 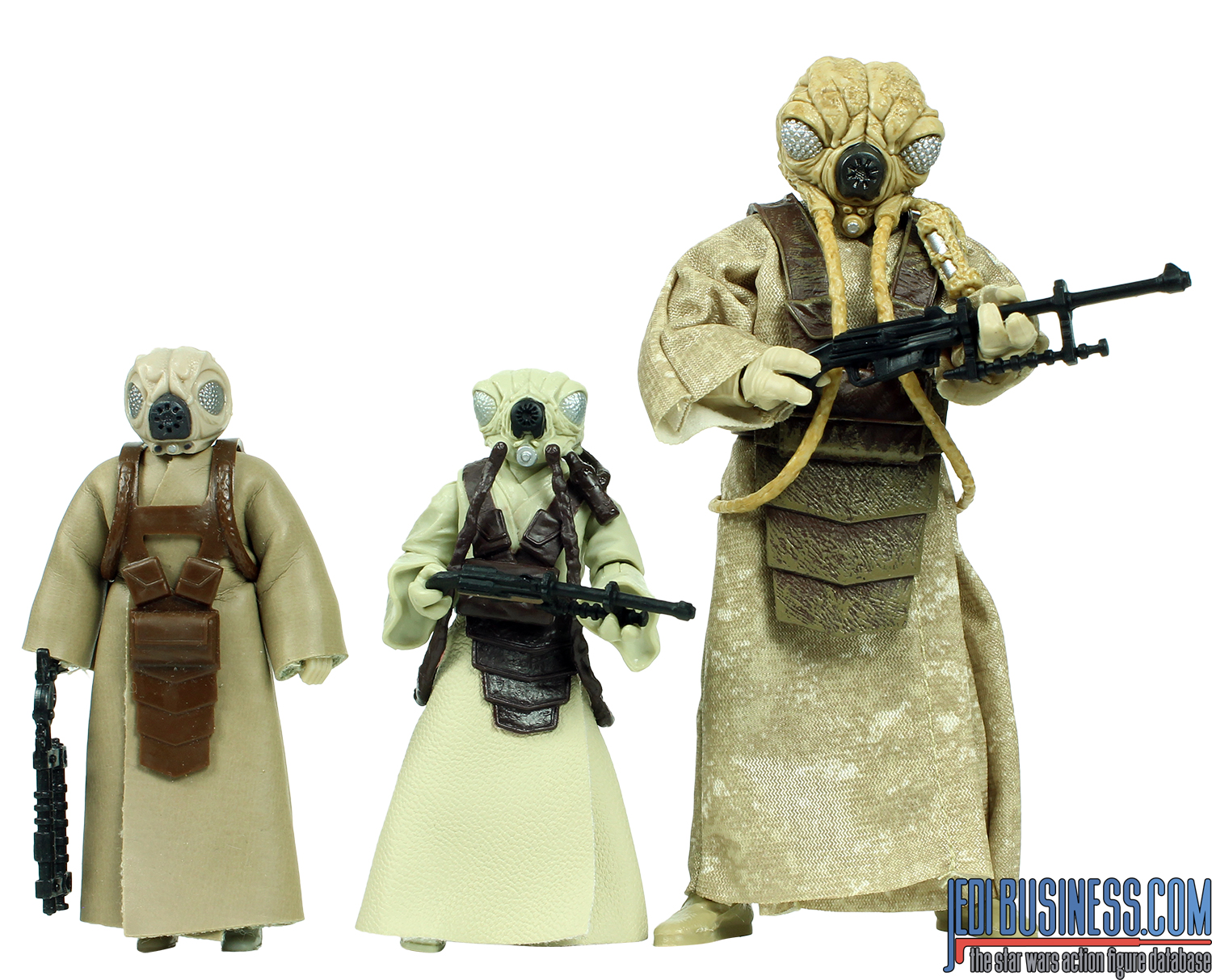 Below is a comparison picture of all the 2-packs lined-up so that you can see the differences in sculpting and the color tributes of the modern remakes. 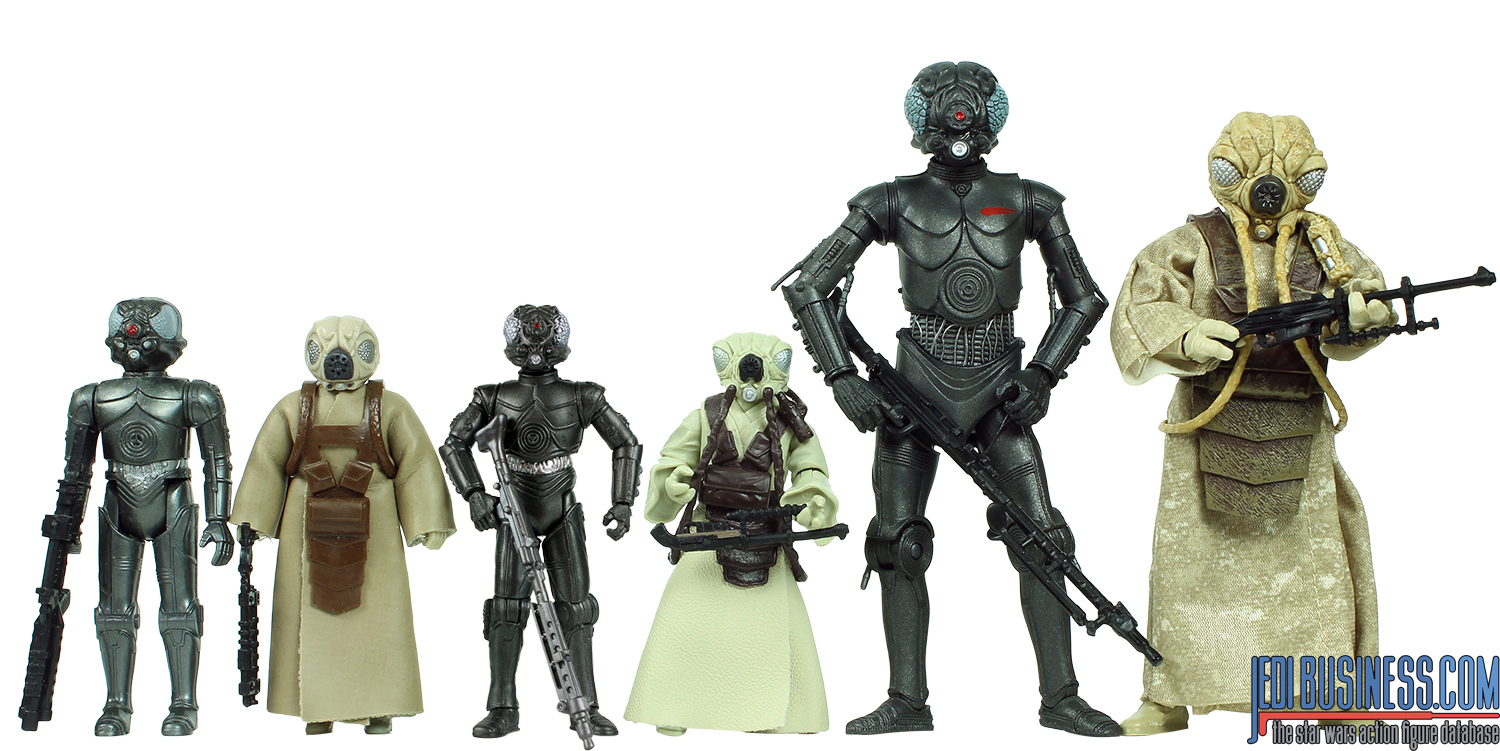 That's it for 40 years of 4-LOM/Zuckuss name swaps and tribute figures in Hasbro's Star Wars action figure line. If you'd like to learn more about each figure have a look at the database entries: