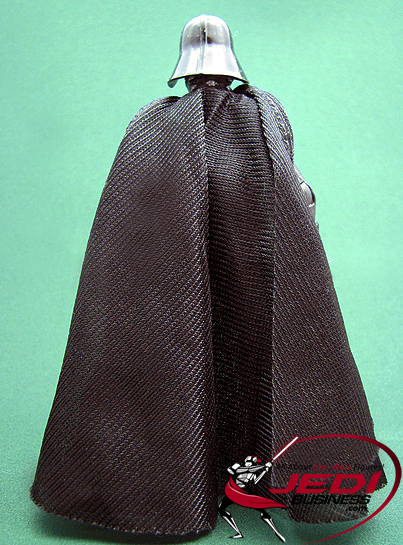 This Darth Vader action figure was released in 2008 during the first wave of The Legacy Collection. The figure came with a red lightsaber, and a two-piece removable helmet (face mask and dome). Hasbro gave the figure 14 joints, which makes it possible to pose Vader in almost any position you want him to be in. Unfortunately the figure has quite a few flaws. Darth is unable to hold his lightsaber with the right hand, and the helmet sits a bit wonky on the head, and it constantly slides up a bit and reveals the head underneath. The silver chain around Vader's neck stands straight up instead of hanging down, but this might be something which you can fix by pressing it down for a while. The paint job on the chest armor and on the shoulder bells is very sloppy. The soft goods cloak is not removable, but looks overall OK. The best part of this figure is definitely the head sculpt, which looks like Sebastian Shaw, the actor who played Vader in the "reveal" scene in Return Of The Jedi. All things considered though, this figure doesn't live up to the expectations. It has a sloppy paint application, Vader can't hold the lightsaber with his right hand, and the helmet either falls off or doesn't sit right and reveals the head underneath.

As has been the custom of the Jedi and Sith for many centuries, Vader uses a meditation chamber to enhance his powers. Within this specially pressurized, hyperbaric enclosure, the Sith Lord is able to remove his mask and briefly still be able to breathe.