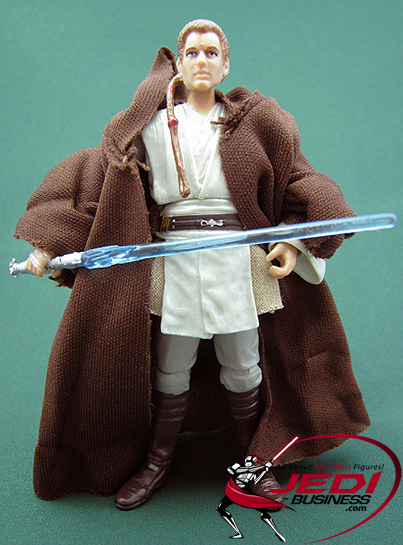 This Obi-Wan Kenobi figure was released individually carded in September 2009 in The Legacy Collection. The figure is modeled after Obi-Wan's younger appearance in The Phantom Menace. The last time Hasbro has released a young Obi-Wan figure was about three years prior in 2006 during The Saga Collection.

The figure is super articulated with 14 joints, including a ball-jointed waist. The face sculpt is new and has never been used before on an Obi-Wan figure. Though the face might feel a bit thin, it's very well done, and if you look closely, you can even spot a very subtle mole on the figure's forehead. The paint application is well done as well and very cleanly applied. Hasbro even gave Obi-Wan a non-removable soft-goods skirt underneath the jedi tunic, and added a hole in his belt so that a lightsaber hilt can be plugged in and hung from it. An individual hilt without a blade was not included.

Thanks to the ball-jointed ankles, you can adjust Obi-Wan's stance easily and balance him out so that you won't need a stand. The lightsaber fits well into both of the figure's hands and won't fall out every time you move the figure. The jedi robe is still a bit bulky, but with patience you should be able to make it look good.

All in all, this Obi-Wan Kenobi figure is the best Obi-Wan figure based on his appearance in The Phantom Menace as of 2009. It took Hasbro 10 years to release a super articulated episode 1 Kenobi, but at least they've pretty much nailed it with this version. Even if you already own any other young Obi-Wan figures which were released before 2009, chances are, you still very much enjoy this figure and find that it's done better in every way.

Obi-Wan Kenobi battles Darth Maul after the mysterious Sith apprentice fatally wounds Kenobi's Jedi Master Qui-Gon Jinn. Kenobi calls upon his years of training to defeat this deadly opponent who is as skilled with the lightsaber as any Jedi.