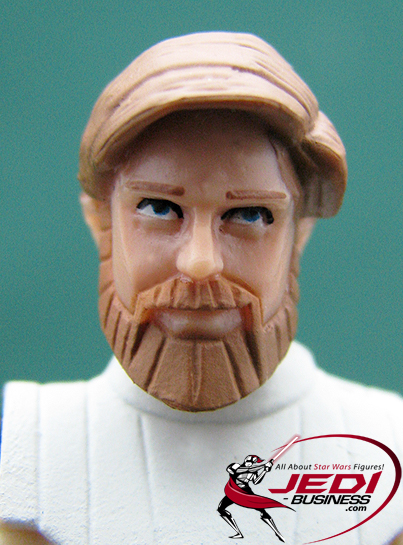 This Obi-Wan Kenobi figure was released in October 2009 together with a Freeco Speeder. Obi-Wan is based on the appearances in the animated Clone Wars TV show.

Hasbro gave Obi-Wan a none-removable soft goods skirt which looks nice. The paint application is well done, but you won't find any dirt or battle markings on the figure. This Obi-Wan Kenobi figure is almost perfect, if it wasn't for the ugly hole in the back. Hasbro re-used the upper body from the previously released Obi-Wan figure where a jet pack could be plugged-in into the back of the figure. While it made sense for the previous figure, it doesn't make sense in this case and it leaves a strange after taste. Granted, you won't notice the hole if the figure is on your shelf facing you, but it's unfortunate that Hasbro's cost-reduced thinking prevented fans from getting their hands on a definite version of this character.

Despite the hole, it's still a super articulated Obi-Wan Kenobi figure based on the Clone Wars animated show with fantastic likeness to the on-screen counterpart. It's much better than the individually released Obi-Wan figure, and the fantastic Freeco speeder should be enough to convince you to get it!

Obi-Wan uses a Freeco speeder to traverse the snow-covered planet of Orto Plutonia while investigating an attack on a Republic outpost. The speeder has an enclosed cockpit designed to shelter the rider from the cold. The Jedi heads into a snowstorm, following the tracks in the snow that will lead him to the perpetrators of the assault.