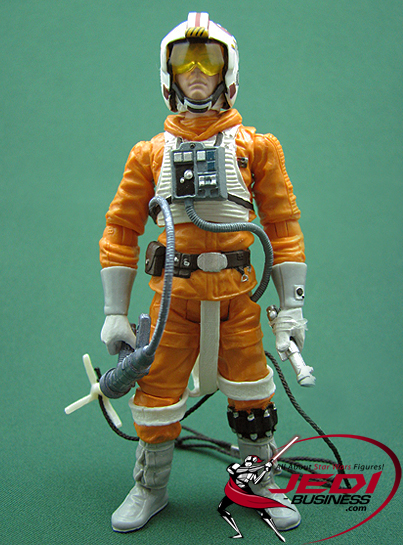 This Luke Skywalker in Snowspeeder Outfit was released in late 2009 as part of the basic figure assortment from The Legacy Collection. Luke can be seen wearing this outfit during the Battle Of Hoth in The Empire Strikes Back, and later at the arrival and departure from Dagobah.

The figure is super articulated with 10 ball-joints (neck, shoulders, elbows, waist, knees, ankles), and 4 swivel joints (forearms, legs). The Snowspeeder helmet is a very tight fit, so tight that the head might pop off when you are trying to remove it. However, the visor covers Luke's eyes spot on and the chin strap fits perfectly onto his chin. Hasbro included Luke's lightsaber hilt with the figure, but they didn't include a blade. Hasbro also forgot to add a hole to Luke's belt so that the lightsaber hilt could be hung from it. The harpoon gun has a hook attached to it, however, there is no action feature and you will have to "shoot out" the hook manually. This is a good thing since otherwise the gun would have been too bulky. Unfortunately, Hasbro gave Luke a right hand which points down in a weird angle, thus making it impossible to have Luke face up, and aim up towards an AT-AT. You can adjust the shoulder and the elbow, but you'll never be able to have him shoot up without looking goofy. Luke's head cap is molded onto the figure and can't be removed.

The paint application on Skywalker is superb, from the chestbox, the facial area to the helmet, everything is painted very cleanly without any smudges or factory errors. It would have been nice if Hasbro would have added some weathering to the helmet or the boots, but even despite that it's a very nice looking figure. All in all, this Luke Skywalker in Snowspeeder Outfit is near perfect. The wrinkles in the flight suit, the details on the chestbox and the belt look very good. The figure's pose overall looks very natural, and when on display it looks just like Skywalker did in some of the ESB scenes. It's not the ultimate-ultimate version of Snowspeeder Luke yet, but it's very, very close and the best available version as of early 2010.

Side note: Hasbro re-worked this figure slightly and released it in the 2012 Movie Heroes Collection. You can compare both figures next to each other here: Snowspeeder Luke Comparison;

Luke leads an attack on Imperial AT-AT walkers that are moving toward Echo Base. He instructs the other snowspeeder pilots to use their harpoons and cables and aim for the legs in an attempt to take out the Imperial walkers.