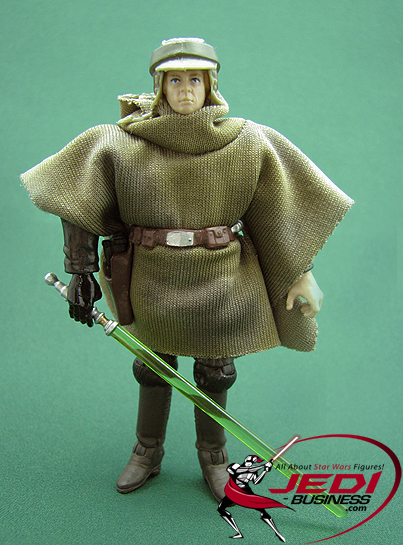 This Luke Skywalker in Endor Gear was released in a battle pack in the fall of 2009's The Legacy Collection. The battle pack contained a total of 3 figures, which besides Luke Skywalker, included Ewok Warok and a Colonel Dyer figure. Luke Skywalker can be seen wearing this outfit in The Return Of The Jedi while on the planet Endor.

Luke is super articulated with 14 joints, including ball-joints in the neck, shoulders, elbows, knees and ankles. Hasbro used swivel joints in both wrists, the waist and both legs. The figure is more on the petite side, but you should be able to get him to stand securely without additional support. Luke's lightsaber fits well into both of his hands, but the blaster keeps falling out. Luckily though, it can be stowed away and fits perfectly into the holster located on the right side of Luke's waist. The rebel helmet is also a very good fit and covers the entire back of the head well. Once you remove the belt (it can be unplugged in the back), the poncho comes off easily by pulling it over the figure's head. Underneath, you'll see Luke in his black outfit, with a removable soft-goods vest and belt.

Luke Skywalker's paint application is pretty basic, but the paint job on the poncho is very well done, with various green, brown and gray colors. Overall, this Luke Skywalker in Endor Gear is one of the best, if not THE best available as of 2010. If you feel that one of your other Endor Luke figures needs an upgrade, you might want to look into this version.

Rebels and Ewoks attack stormtroopers during the Battle of Endor. The Rebel strike team arrives on Endor's moon to demolish the shield generator protecting the Death Star. The Rebels are captured but a surprise attack by the Ewoks frees them, and a desperate battle ensues. Through the combined forces of the Endorian natives and Rebels, the generator is destroyed.