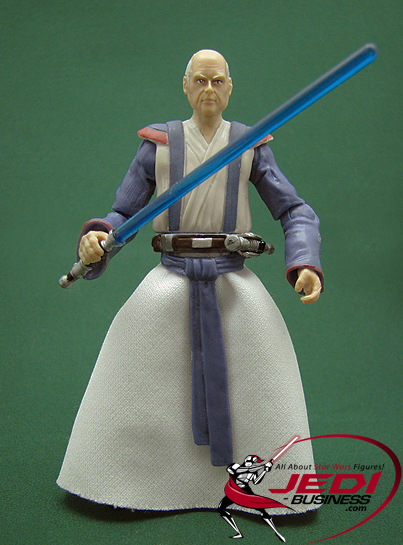 This concept Obi-Wan Kenobi figure was released on a single card, but packed-in together with a concept Yoda, as part of The Anniversary Collection. The set was a San Diego Comic Con convention exclusive in the United States in 2007. Obi-Wan is based on concept art created by Ralph McQuarrie for the original Star Wars movie.

Kenobi has a total of 12 joints, only missing articulated knees. However, there are no balancing issues and the figure stands remarkably well on its own without a stand. Hasbro included two weapons with the Jedi Master, a blue lightsaber, and an individual lightsaber hilt. Both weapons fit very well into either of the figure's hands. The hilt can also be attached to the figure's belt, where it stays nicely attached. There are some concept drawings of Kenobi wearing a blue Jedi robe, but unfortunately Hasbro didn't include one with this figure. The white soft-goods skirt is not removable.

The paint job on this McQuarrie Obi-Wan Kenobi is cleanly applied, and there is no weathering or dirt to be found anywhere on the figure. Kenobi's mold looks great, with a very nicely sculpted head. All things considered, this Obi-Wan Kenobi figure, based on the McQuarrie concept, is very well done. And even though there are no joints in the knees and there is no Jedi robe included, it's still very well worth adding to the collection!

In his sketches, concept artist Ralph McQuarrie evokes the graceful power of a ninja master or samurai warrior in his drawing of Obi-Wan. The diminutive Yoda appears leaner and more whimsical than he will ultimately appear in the films, yet he still exudes mystical strength.