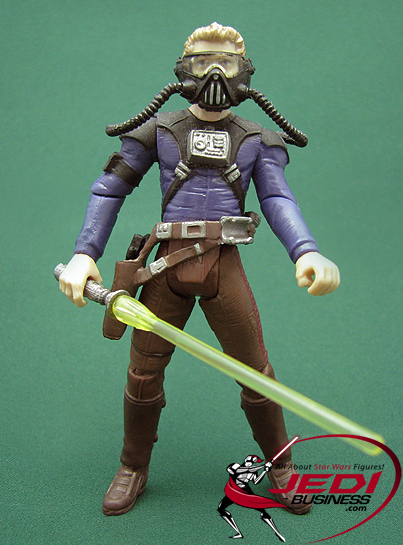 This concept Luke Skywalker figure was released individually carded, as part of The Anniversary Collection in 2007. Skywalker was a Celebration IV convention exclusive in the United States, and is based on early concept art created by Ralph McQuarrie for the original Star Wars movie.

Luke Skywalker is super articulated with a total of 14 joints, and thanks to adjustable ankles and knees there are no balancing problems. Luke came with a lightsaber hilt, a yellow lightsaber blade, a blaster and a removable mask with backpack. The lightsaber fits very well into both of Luke's hands, and the hilt attaches nicely on the left side of the belt. The blaster fits well into the holster, but it sits quite loosely in both of Skywalker's hands. The breathing mask is permanently attached to the air supply backpack via two "cables". So, if you remove the mask, you will also have to remove the backpack. The mask is a perfect fit for Luke's face and covers the eyes, nose and mouth area spot on. The chest box on Luke's chest is molded into the figure and can't be removed.

The figure has a clean appearance without any scratches or dirt on it, just the way it was seen in the concept drawing by Ralph McQuarrie. The only piece which has some nice weathering is the air supply backpack. Luke's face is molded nicely with his hair blowing in the wind, which again, captures the look from the McQuarrie drawing very well. All in all, this concept Luke Skywalker figure is easy to recommend, and yet again another fine addition to the McQuarrie concept figures.

In the painting depicted on the front, Luke Skywalker and Darth Vader duel. Wearing an oxygen tank and breathing mask, Luke looks eerily like his father. Although crouched before Darth Vader, his stance vibrates with intensity.