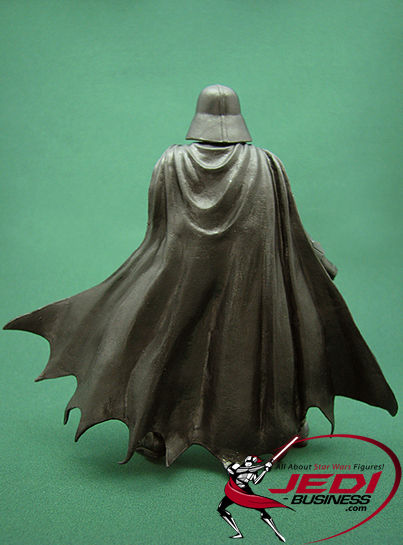 Darth has 12 joints, with swivel joints in the neck, shoulders, wrists, the waist and both legs. There are ball joints in both elbows and the ankles. The knees are not movable, but thanks to adjustable ankles and a wide stance, the figure stands quite nicely by itself without a stand. The hard-plastic cape is removable and compliments the figure nicely. The Ralph McQuarrie inspired helmet is a great fit, and sits tightly without leaving a gap. The upper part of Darth Vader's chest armor is removable, and reveals some mechanics underneath, emphasizing that Vader is now more machine than human. The figure can hold the lightsaber very well in the right hand, but it sits quite loosely in the left.

The paint application on Darth Vader is kept in a dull black and gray, with silver accents on the "mechanics" and red buttons on the chest box and the belt buttons. The sculpt of the cape and the wide stance give the figure a more dynamic look. The mechanic details underneath the chest armor, and the left shoulder add to the overall cool look. The face sculpt turned out well and is quite interesting, showing a different and younger Anakin Skywalker underneath the helmet. All in all, this version of Darth Vader turned out nicely, despite the use of mainly swivel joints. If you are a fan of the expanded universe or Dark Horse's Infinities comic book series, you'll very likely enjoy this version of Vader.

In this tale, Princess Leia fulfills Luke Skywalker's dying words, "Find master Yoda... Train as a Jedi... Go to Dagobah." On the jungle world of Dagobah, Leia is shocked to learn her father is the evil Darth Vader. Under the tutelage, Leia becomes a skilled Jedi but faces a final trial: battle her father in a lightsaber duel and resist his attempts to turn her to the dark side.