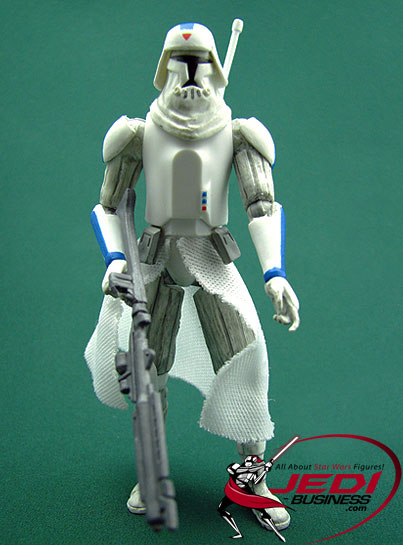 This animated-style, Cold Assault Gear Clone Trooper was released in the Clone Wars Deluxe line in Fall of 2010 together with a Freeco Speeder. The set is based on the Clone Wars TV show episode "Trespass" from the first season.

The Clone Trooper is based on the Cold Assault Gear Captain Rex figure from early 2010. However, the helmet, both arms, the knee caps and the buttons on the front are painted differently. In addition to a different paint application, the figure was given a soft-goods skirt and the holsters on each side are now gone. The articulation stayed the same, which means the figure has 12 joints, with a swivel joint in the neck, the wrists, waist, and both legs. There are ball-joints in both shoulders, the elbows and both knees. The ankles are not articulated, but it's possible to balance the figure out OK without a stand. Hasbro included a Heater Pack, a blaster rifle and two removable shoulder pads with the clone. The blaster rifle is a very loose fit, but with patience the figure can be displayed holding it quite nicely. The top part of the helmet can be plugged into a hole on the top, where it stays firmly attached. The shoulder pads also plug into holes on each arm. Unfortunately, the heater pack (backpack) wouldn't plug into the figure, because the hole was too small to accommodate the peg on the backpack. However, after trying for several minutes to attach it, the hole widened a little, and the backpack fit OK. So if you have trouble keeping the backpack attached, keep trying and it eventually will stay put.

The paint job on the Cold Assault Gear Clone Trooper is pretty cool on the helmet, arms and legs. Those parts are nicely weathered and have a dirty and used look to it. Unfortunately, the soft-goods skirt and the chest armor is kept in a pristine, all-white condition, which looks a little off compared to the rest of the armor. The figure's almost super articulated sculpt captures the likeness of these troopers very well. The Freeco Speeder is identical to the previously released Freeco Speeder (incl. the icy windshield) which came with this Obi-Wan Kenobi figure. The trooper fits into the vehicle, but you will have to remove the backpack, and push the figure in a little, because it's a very tight fit. All in all, this Cold Assault Gear Clone has a few shortcomings, but it's a never-before-done figure, and based on one of the best episodes of the Clone Wars. It's just a cool looking trooper and looks great on display next to Cold Assault Gear Captain Rex!

A clone trooper rides a Freeco bike on the frozen world of Orto Plutonia. The bike's windscreen shields the driver from wind and snow, and cold weather gear further protects the trooper from the harsh environment. The bike's speed and maneuverability are pushed to their limits when the native Talz launch an attack to defend their home world.